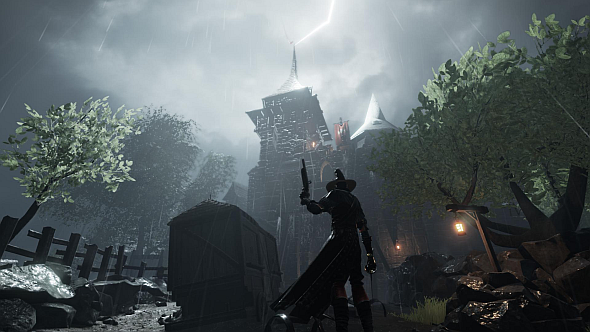 Fatshark have today announced Stromdorf, the latest DLC for their team action game Warhammer: End Times – Vermintide. It’s due on May 4, and will take players to damp new places.

Killing rats alone is good, but it’s always better with friends. Check out the best co-op games on PC.

Where the last DLC, Karak Azgaraz, battered players with snow as they explored a Dwarfen fortress high in the Grey Mountains, the new adventure will introduce another form of precipitation. The forecast is a 100% chance of rain as you journey to the small market town of Stromdorf and the surrounding hills, a “wet and wild” area of the Old World just to the north of Ubersreik, Vermintide’s main setting. A courier carrying important information has gone missing and naturally the Skaven are involved and up to no good, so off you go to stop them.

It looks like Stromdorf is a bit slimmer than Karak Azgaraz, adding two new levels where the last DLC added three, and one new weapon (a big sword for Markus Kruber) instead of two. No official word on prices yet, but since Karak Azgaraz costs £5.99 ($8.99), espect Stromdorf to be similarly priced, or possibly cheaper.

If you’re interested, here’s the Steam page for the Stromdorf DLC.