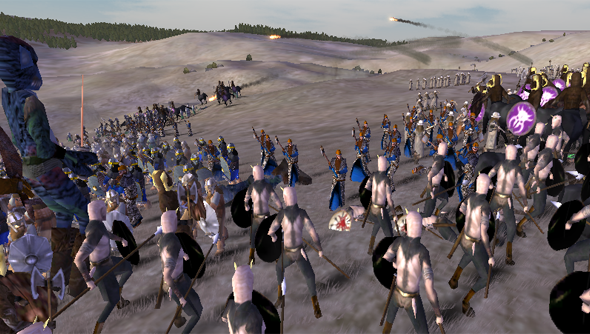 Creative Assembly struck a deal with Games Workshop for “multiple titles” in the swords ‘n’ skaven Warhammer universe last year. But modder Jubal Barca began work on his own adaptation long before that – shortly after the release of the now-sequelised Rome: Total War. And in clear contravention of the modder’s code section 13*, he released the final version of Warhammer: Total War this weekend.

Very final it seems too: replete with a revamped feature list, new factions and buildings, a major UI overhaul and ginormous unit roster boasting stegadons and steam tanks. Barca’s End Times map is made up of 150 provinces, taking in the Chaos Wastes, Lustria, Naggaroth, the Mountains of Mourn and all the strange places in between.

Barca can categorically say that there will never be another update: his team cannot fit another unit into the game without it crashing.

“It’s been over half a decade since I started working on Warhammer: Total War – over a quarter of my life – and so finally in this brief ramble I’d like to give a final round of thanks to everyone who helped along the way and to all of you, dear readers, for wanting this mod and making the frustrations of bending the Rome: Total War engine to my will so much more worthwhile,” wrote Barca is his sign-off.

“Comrade_General deserves a specific mention for putting up with ludicrous numbers of skinning requests over the years, but for all the people who’ve worked on this, from Zodiac Productions onwards, today is the day when it finally comes to fruition.”

I’ll be happy if I can recreate my favourite ever White Dwarf battle report, in which a horde of Skaven abandoned their exploded machinery and fled right across the the objective border of the map, winning the match. How about you?

*’A modder must never finish that which she seeks to start.’