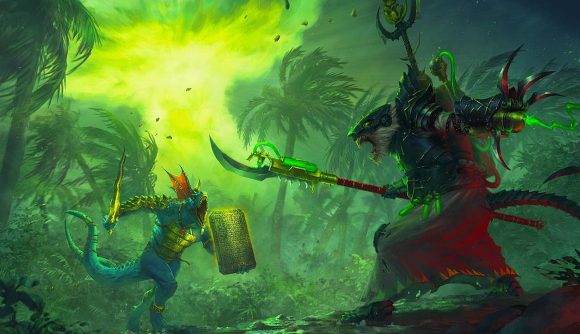 July 30, 2019 This article has been updated to include Games Workshop’s financial report.

Games Workshop – the company behind the Warhammer tabletop games – is having a pretty good year. In fact, it’s had a pretty good three years in a row, with a sizeable increase in royalty income, almost all of which comes from Warhammer videogames.

In its latest annual financial report (available via Games Workshop), the wargaming company announces record-breaking financial growth for those last three years, and a £1.7 million increase in royalty income to £11.4 million. 87% of this is from PC and console videogames, with a further 7% from mobile games. CEO Kevin Rountree attributes this especially “to the strong performances of Total War: Warhammer II and Warhammer: Vermintide 2”.

In a statement given to PCGamesN, Kate Heseltine, analyst at Edison Investment Research, says “few retailers can boast three consecutive years of record-breaking growth in the current climate. Games Workshop, the global leader for tabletop miniature gaming, has reported FY19 sales growth of 16% to £256.6m”.

As you can see, then, Games Workshop’s licensing arrangements represent a small chunk of its overall business. Much of its recent growth is due to the wild success of Age of Sigmar, the reboot of its fantasy tabletop game. Those licensing deals are also heavily focused on videogames, though there are plans to grow into other media – just a few weeks ago Games Workshop announced that a TV series based on its Warhammer 40k game is coming, starring Inquisitor Eisenhorn. There’s also an animated 40k series in the works, which will feature the Blood Angels and likely be shown on the Warhammer TV YouTube channel.

Total War: Warhammer III is also on the way, though there’s no release date or many details available just yet – but we’re hoping that it’ll include some new playable races to try out, like Ogre Kingdoms or Chaos Dwarfs, and maybe some proper naval battles.