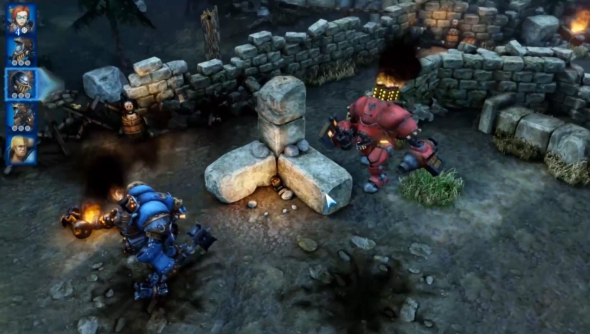 Warmachine: Tactics was made to last. An adaptation of a tabletop game Kickstarted by nearly 20,000 faithful fans, it was never going to be sequelised a year after its release. Instead, it’ll follow the League of Legends model of preservation and restoration.

LA developers WhiteMoon Dreams were tasked with laying the concrete. They found strong foundations in Unreal Engine 4, and set about building a turn-based tactics game fit for the future.

WhiteMoon began work on Warmachine in Unreal Engine 3 – a framework their team already knew and understood.

“Working with UE3 was nice because it was very familiar,” said WhiteMoon CEO Jay Koottarappallil. “But when Epic told us, ‘You guys should really consider developing in UE4, we’re really firing on all cylinders for that,’ we began an evaluation on it.”

As it turned out, the new engine offered an easier development pipeline for the studio’s artists and designers. UE4 would allow them to build a “really big game” in a little over a year – at “one-fifth” the size of the budget of similar games and with fewer staff than anticipated.

After that, the team had plans to churn out units and updates for another “four to six years”.

“We wanted something that was going to be scaleable, and I feel like the choice of the engine has been one of the best decisions that we’ve made on the project. It was really forward-looking.”

WhiteMoon have faced a very modern design conundrum: they’re concerned with ensuring not just that Warmachine looks and feels contemporary now, but that it remains that way in half a decade’s time.

“We didn’t want it to be one of those games that just sort of waned over the years,” said Koottarappallil, “and then we would have to think of a gigantic engine upgrade. 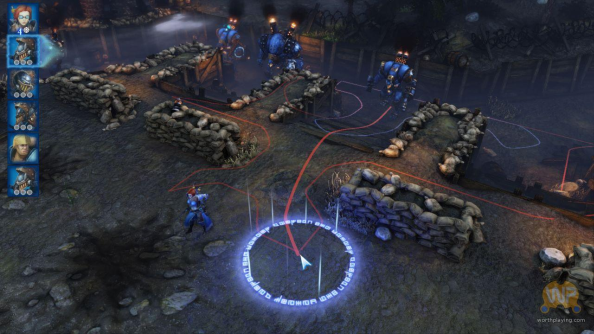 “We really have to look at League of Legends and other games that have gone on for a long time,” he went on. “At some point, only a few years after the game has been released, players start asking: ‘Okay, when is this game going to start looking like the other games I’m playing nowadays?’.”

To make matters more complicated, the soothsayers at WhiteMoon also had to prepare for a changing studio. By 2020, the Warmachine team will inevitably have been eroded by the natural back and forth of the games industry – the requirements of other projects, and the flow of staff to and from other developers.

To prepare for that eventuality, the developers have carefully tied off and labelled all of their work – in the knowledge that somebody different might need to open up and fiddle with their code in the future. They’ve done so using UE4’s Blueprint – the toolset that allows designers without engineering expertise to program and play with complex systems. 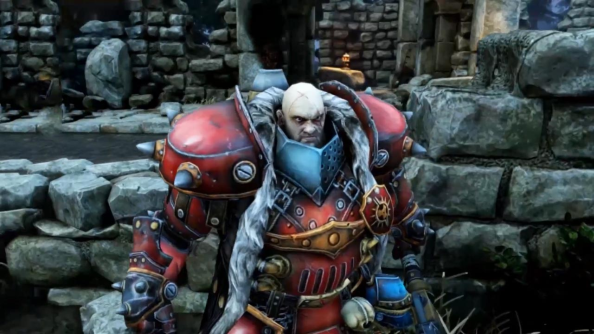 “We used the crap out that,” said Koottarappallil. “Being able to hire on new designers and have them learn a more visual scripting language is much easier for us. It’s more cost-effective and it’s easier to find those people. So once again we’re really ensuring longevity.”

Some of UE4’s other innovations required a little more work to take advantage of. To access the new engine’s capacity for detail, WhiteMoon’s art team had to retrain on the job – overturning the fundamental principles of their work to adapt to physically-based rendering.

“That was honestly one of the big hurdles that we had to go over internally,” said Koottarappallil. “We have artists who had been working for years with the standard chain models that people have been using since 3D started showing up.

“But now you have to teach them that, ‘Okay, all these years you’ve been using specular, but the truth is that specular doesn’t really exist that way’. That’s kind of like saying, ‘Your parents are not who you think they are’.”

Once WhiteMoon had put the hours into self-education, however, two wonderful things happened: first, the art became “ten times better”. And second, the art team learned how to pull “performance wins” out of their work – leaving space for “all sorts of insane detail”. 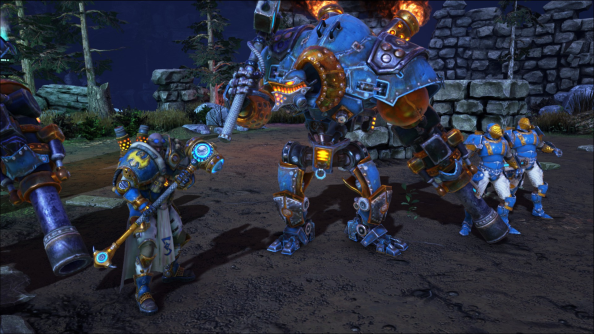 WhiteMoon have collaborated directly with Warmachine’s tabletop team at Privateer Press, reworking their miniatures in ways that made sense for three-dimensional, animated characters.

“A lot of times the concept art is made for a particular pose,” said Koottarappallil. “We realised that, ‘Oh my gosh, the guy can’t lift his arms over his head’. And we would go back and forth to Privateer and spend time building these beautiful models.”

UE4 has given WhiteMoon plenty of scope for sci-fi steampunk visual effects (“the base Warjack [mech] is always going to have flames shooting out of somewhere”). Through Blueprint, the studio were able to build their basic mech, and then reuse it as the basis for every subsequent design. Within fourteen months, they’d put together 52 characters.

Warmachine creator Matt Wilson and his staff at Privateer had a “really big hand” in the game throughout – writing all of the game’s dialogue and directing voiceovers.

“We talk almost every day, just figuring out everything from what features are going into the game to what units are coming up six months from now,” said Koottarappallil. “It’s a really tight loop.”

Wilson was set up with a PC connected to WhiteMoon source control, so that he could see the very latest units and updates in-engine.

“We’ve had large clients before that have wanted to maintain a lot of artistic control, and actually Privateer was the most easygoing of all,” said Koottarappallil. “Matt is actually the one that does all the approvals, and he hardly sleeps – so we could submit anything at any time of day.” 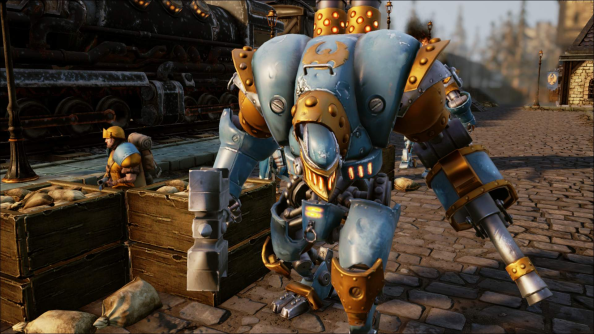 After a comfortable experience sharing their work with Privateer in UE4, WhiteMoon were confident that they could do the same with Warmachine players in Steam Early Access.

“Early access is always a scary thing for developers, right – putting out something that’s unpolished and all that,” said Koottarappallil. “But we were able to iterate so fast internally that we were sure we would be able to turn that around for the public as well.”

The challenge, it transpired, was bugfixing. WhiteMoon’s team peaked at 30, but bubbled around the 20 mark for most of development. Their QA team was three people strong – community management and social media duties willing.

“Our big problem was really being able to discover and knock out the bugs quickly,” said Koottarappallil. “When you have 52 units, each with their own set of abilities, bugs can show up anywhere.”

The studio ended up leaning on the community for help – “good and bad, because there’s a lot of people that get it and there are lot that don’t” – and relying on UE4’s capacity for quick turnarounds.

“One of our players last night told me that they had found a bug,” said Koottarappallil. “I submitted it to QA, who verified it and told Engineering. The whole cycle took 15 minutes and the fix went out in a patch within hours. It took no time, no effort. It’s just wonderful.”

Like one of Warmachine’s big metal mechs, the engine is still moving forward. In 2020, perhaps, WhiteMoon will be taking advantage of entire toolsets yet to be released, revamping Warmachine: Tactics for a future audience.

“That’s exactly how we’re thinking about it,” said Koottarappallil. “The engine is out there and it’s evolving constantly. Every update brings huge, brand new changes – not changes that upset everything we’re doing, but changes that just add to what we’re doing. The scalability over the years will be fantastic.”

Warmachine: Tactics is out now on Steam. Unreal Engine 4 development is available to anyone for a $19 monthly subscription fee.

In this sponsored series, we’re looking at how game developers are taking advantage of Unreal Engine 4 to create a new generation of PC games. With thanks to Epic Games and Edge Case.