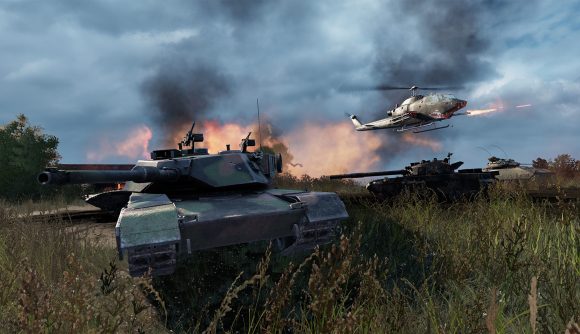 Pop in a Scorpions cassette and crank up the volume, because Cold War RTS game Warno has arrived in Early Access on Steam. It’s missing some core features that make for some of its key selling points, but there’s enough here to get a sense of how developer Eugen Systems has gone about marrying concepts from its Wargame series with its newer Steel Division games’ format.

Set in a slightly divergent 1989, Warno has you commanding either NATO or Warsaw Pact forces in a hypothetical Cold War-gone-hot situation in the Fulda Gap region of Germany. While Eugen says more units will be arriving over the course of Early Access, at launch Warno gives you access to two pre-made battlegroups and their associated units. There’s the American 3rd Armored Division and the Soviet 79th Guards Tank Division.

You can only play skirmish mode for now – the Army General campaigns will be added at a later date. At launch, Warno has four maps to pick from: Chemical, Death Row, Two Ways, and Danger Hills. These can support battles ranging from 1v1 to 4v4, and you can either fight against and alongside AI or play co-op or head-to-head against human opponents.

As Eugen promised, the units themselves are obsessively detailed, with accurate uniforms, equipment loadouts, and formations drawn from the real-world military units stationed in the region during the late Cold War era.

And while there are only the two battlegroups for now, each one has a range of scouts, infantry teams, tanks, self-propelled artillery pieces, helicopters, close-air support aircraft, and logistics vehicles to pick from. Eugen says towed, crew-served weapons like field guns and infantry anti-tank guided missile systems will be coming in future updates, along with more maps and more divisions representing more nations on both NATO and Warsaw Pact sides.