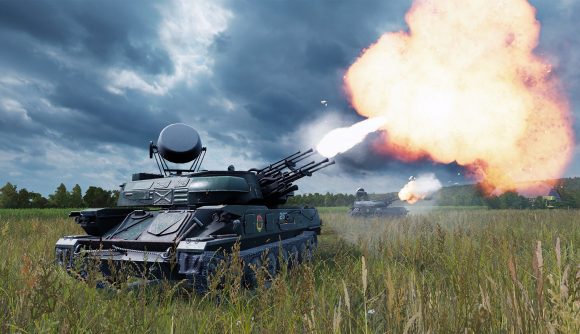 Cold War RTS game Warno entered Early Access on Steam January 20, and the developers already have their first content update lined up. In fact, Eugen Systems players can expect new content for Warno about every two weeks during Early Access, although they caution that these may at times be delayed due to unforeseen circumstances.

The studio is naming Warno’s Early Access updates after Napoleonic marshals, and the first one is called Milestone Ney. It’s coming in February, and will add two new divisions and a new 10v10 map. The new battlegroups are the US 8th Infantry Division (Mechanised) for the NATO side, and the Soviet 39th Guards Motorised Rifle Division for the Warsaw Pact.

The next patch, Milestone Davout, will include two new German divisions, one each from East and West Germany, and multiple new maps. The fourth update, Milestone Murat, will be the same lineup: a new West German division and a new East German division, and additional maps. That’s a sizeable expansion to the current Warno roster, which at launch included just two initial battlegroups.

Eugen says either either Davout or Murat should include the “first batch” of towed weapon systems for both sides, and that these will include hardware like howitzers, mortars, and anti-tank guns. The team is also reworking weapon loadouts for air units, and even considering adding bombs for helicopters – something the engine wasn’t originally created to handle.

The unit barks you currently hear in Warno have been pulled from Steel Division 2, and Eugen says these are only being used as temporary placeholders – the team is in the process of translating and recording all new voice lines for the full release of the game.