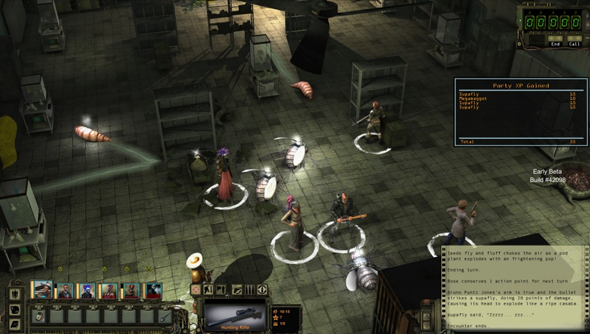 Wasteland 2’s citizens are sticklers for murder. Until the latest patch they’d kick up a fuss if you killed an innocent even if they, themselves, were dead. Thank goodness their protestations are now silent thanks to Wasteland 2’s 6th, and largest, patch.

Prior to this patch party members (CNPCs) would protest when you killed innocents even if they were out cold or dead. That’s no longer the case. Nor will combat freeze up if “a party member transformed into a Pod Person.” Jesus. I need to play this game more because I’ve not come across the pod people.

Oddly, Inxile didn’t include either of those two gems in their highlights, instead they focused on two major questlines that couldn’t be completed properly for some players because of bugs. A huge bug pass generally, and Steam achievements for Mac and Linux players.

I’ve included the full patch notes over the page. If you want to avoid spoilers I’d advise against reading them as lots of the quest sensitive bugs reveal nuggets of story.

Additionally, we’ve corrected a couple of critical quest bugs, plus an absolutely massive number of smaller issues with in-game object details, cleaned up behavior when the player does unexpected stuff (like poking new air-holes in an NPC’s head with an SMG right after accepting their quest to track down that family heirloom), and have updated the game’s text in both English and other languages. This one is in the running for being our biggest Wasteland 2 patch so far – and certainly of the new year.

See below for the full details!