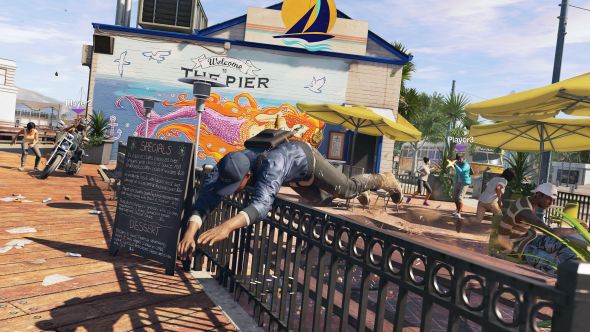 Playing Watch Dogs 2 non-lethally just feels right, doesn’t it? Marcus and his merry band of hacktivists just don’t look right when they’re gunning down police with automatic weapons. That’s why Ubisoft’s latest free update for the game seems interesting, what with it adding a paintball gun. There’s also some other bits, but those other bits have nothing to do with firing paint pellets at police officers, so…

We had a look at Watch Dogs 2’s new paid DLC, as well as the free update, at that link.

Of the new features, Showd0wn – with an ‘0’ because Hackerman – adds 2v2 PvP matches that can be played with a pal or a stranger. There are three objective types: Steal the HDD, Doom-load (KotH), and Erase/Protect the Servers.

Elsewhere, there are now online races in drones, motorbikes, eKarts, and more. These even have their own leaderboards.

If you’re looking for some offline action, Loot Trucks will now show up in the world. You need to hack into them, then fight off the waves of police who show up to protect them. To be honest, you might need more than a paintball gun for this one.

There are also a bunch of new clothing options and a host of gameplay tweaks. Here’s the changelog: