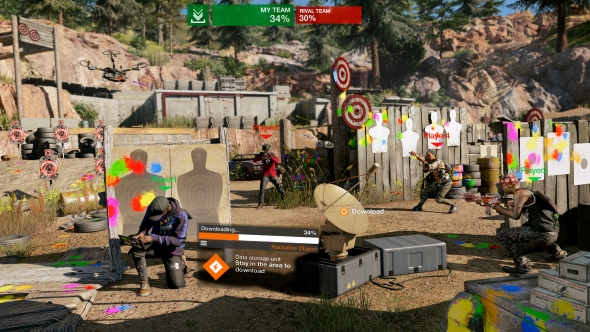 Watch Dogs 2 may feel a distant memory on the bullet train-fast calendar of gaming, but like any modern title it’s still very much alive. Its third piece of major DLC – No Compromise – will land on PC on May 18, providing season pass owners with one last chapter of hacktivism. Before that, though, there’s a sizable free update for all players that adds a surprising amount to the game’s multiplayer suite. So much so, in fact, that it vastly outshines the paid-for missions. I visited Ubisoft to go hands-on with both sides of the upcoming additions.

Play your own way with the best sandbox games on PC.

No Compromise – actually a bit of a compromise

If you’re a season pass owner, chances are you really like Watch Dogs 2. Well hopefully you do, because No Compromise, the final piece of paid-for DLC, is very much an extra helping of the game’s signature hacking sandbox. The headliner of the content pack is the Moscow Gambit operation, which sees Marcus and DedSec come face-to-face with the Mafia.

The mission set focuses on dirty dealings in the porn industry and asks players to infiltrate a party at an adult film studio. Arriving at the rooftop pool palooza, Marcus is immediately surrounded by topless models in six-inch stiletto heels. Hacking into the studio below allows you to take control of the movie cameras and slide them from stage to stage, witnessing some (very tame) movie-making in action as you do. The objective is to hack the film’s director and discover the horrific things he’s been doing with his actors (human trafficking is the topic of the day again), and Marcus’s final confrontation with him is, amusingly, 50 shades of pain.

From my hands-on time with the operation it appears that sticks closely to the main game’s mission template – hacking items, remotely scout locations, acquiring access keys – and does little to freshen up the formula. It’s hard to get excited about returning to that scout-and-hack cycle, even if it is one of Ubisoft’s most robust gameplay loops. That means the operation has to rely on narrative as a hook. Unfortunately I think Moscow Gambit is a duff move; the porno gangster angle feels like a poor imitation of Grand Theft Auto territory, and I think that’s a massive disservice to Watch Dogs 2. The main game did a terrific job of distancing itself from Rockstar’s behemoth. Sure, it has an open city with stealable cars and urban shootouts, but it’s focus on meme-fuelled internet fun cemented the adventures of DedSec as their own thing. Venturing into the adult-focused realms of Grand Theft Auto feels like Watch Dogs faltering, and not even a hentai-tentacled sex droid can save it from that.

Things are more true to the game’s spirit in the premium customisation additions that come packaged with No Compromise. A trio of new outfits are based on the emergency services, and include a fantastic fireman’s hat, a sexy torn tee-shirt, and a pair of Crocs rubber shoes. Matching up with these are equivalent vehicles, all decked out with DedSec vinyls. Tearing through San Francisco in a black and lurid green fire truck is exceptionally good fun. Finally there’s also two new non-lethal weapons: an air shotgun that sends cops flying, and a taser sniper rifle for long range knock-outs. 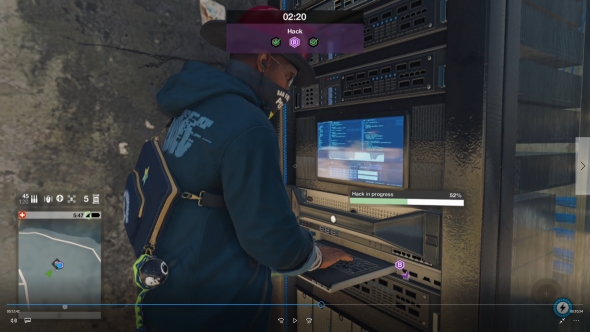 While the premium DLC is on the disappointing side, no such thing can be said about Showdown, the free new 2v2 multiplayer mode. Watch Dogs has always had a smart approach to multiplayer, and the three match types available in this free update emphasises that creativity while mixing it with PvP traditions.

Showdown randomly selects one of its match types for paired-up players to engage in. The most exciting of the three, Steal the Hard Drive, tasks both teams to grab three drives, each of which is located in an awkward place. It sees players scrambling to climb warehouses and billboards in attempt to score, while simultaneously taking pot shots or hacking items to make things increasingly difficult for the enemy. It’s a great mix of multiplayer aggression and Watch Dogs’ signature hacking puzzles; can you work out how to access the drive under pressure?

The second mode is a little more conservative, using multiplayer classic King of the Hill as its template. Both teams must download data from a specific spot, which requires standing within a radius of the equipment. Enemies that make it inside that area prevent the progress bar from building, so the mode is essentially a battle for territory control. Matches naturally feel much smaller scale here due to only using one locale, but it provides the right quick-fire thrills. Having just two players on each side allows small cat-and-mouse moments to develop, which can be exceptionally satisfying when the tension finally bursts.

That leaves Hack/Protect, a capture point mode which is perhaps the most interesting of the three. Attackers are required to hack three terminals, a job that not only requires the infiltration of the defender’s area, but also spending a good several seconds completely exposed while undertaking the hack. There’s an excellent seesaw effect to the flow of a match; the defenders struggle to defend all three terminals, but when only one remains the match is suddenly heavily in their favour. With just one point to hold down, it becomes almost impossible for attackers to take it with anything less than perfect co-ordination. The secret appears to be a simultaneous assassination of both enemies, then making the most of their respawn timer to seize the final terminal. Naturally, making that happen is easier said than done. 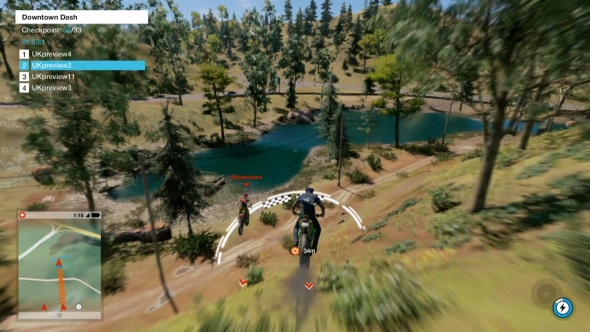 That’s not where the free update stops, though. It also brings competitive races into the fold, consisting of kart, off-road, and drone variants. You’ll have seen single-player variants of these before, but they vastly benefit from 4-player support. The off-road endurance race, a track that covers both off-road and city areas, is comprised of a massive 152 checkpoints and can play perfect host to a variety of intense corner-pass struggles.

The final talking point, and one that perhaps best sums up the free update, is the paintball gun. A non-lethal weapon in the sandbox that turns deadly in PvP, it splatters foes with bursts of colour that also display on an enemy player’s screen. Like the very welcome multiplayer modes, it’s a good bit of fun, and something that feels perfectly suited to the DedSec way of life. Why kill your enemies when you can troll them?

Watch Dogs 2’s free content is included in Title Update 7, released this month. The No Compromise premium DLC will be available to PC season pass holders on May 18.