It may be late in the year, but 2016 is still throwing out huge triple-A games. This week it’s Watch Dogs 2, one of Ubisoft’s most intriguing sequels. Have the studio managed to make open-world hacking interesting this time? Perhaps, but the real question is: how does Watch Dogs 2 perform on PC? With a delayed release, we hopefully should be looking at a port that has used its extra development time for great PC optimisation.

So, let’s find out. We’ll be testing the game out using two cards from Nvidia (a GTX 970 and GTX 1080) and two cards from AMD (an R9 380 and RX 470) in order to find out how the game performs at 1080p, and how best to get it running at 60fps. When all that’s over and the dust settles on heavily SMAA’d San Francisco, there’ll be no doubt as to Watch Dogs 2’s PC performance. 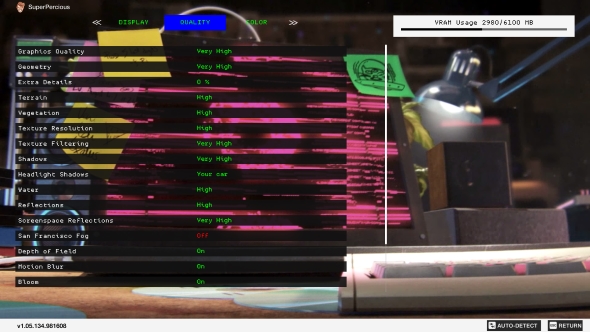 Watch Dogs 2’s graphics settings are split across three tabs: display, quality, and color. In display you’ll find resolution settings, v-sync, and a field-of-view slider, as well as a pixel density setting. The color tab allows you to adjust brightness and sharpness.

The quality tab is where you’ll spend most of your tweaking time, and is comprised of 20 options. Chief among these are the presets, of which five are available: ultra, very high, high, medium, and low. This links into a recent trend of developers using more than the traditional four presets in order to offer a slightly more granular approach to setting up the game for various systems.

A VRAM usage meter, seen in most Ubi titles these days, helps you calculate what settings are within your system’s capabilities, and hovering over each option displays a tooltip that provides advice as to how intensive the various settings are.

For our presets analysis we compare Watch Dogs 2 on four different settings – ultra, high, medium, and low – and see how the different presets affect graphical and performance quality. Ultra uses the free ultra textures pack, which can be downloaded through Uplay. 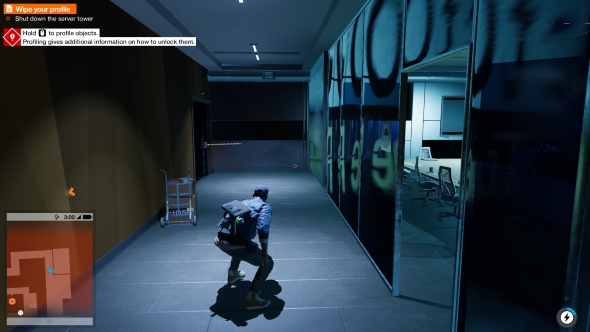 With excellent shadow and lighting work, Watch Dogs 2 at ultra settings is a good-looking game. It’s never going to stun you with its beauty, but there’s plenty of detail in its environments and a plethora of visual effects that keep everything looking pleasant. You can see in the above screenshot the reflections in the office glass partition wall, which dynamically adjust as you move.

As for performance, ultra struggles a touch, which is upsetting considering Ubisoft recommends using the GTX 1060. We’d hope to see 60fps when playing at 1080p, but instead ultra results in significantly lower. Outside in the busy open-world, expect to see around 45 fps, but don’t be surprised if it dips into the high 30s. When inside or in quieter zones, it’s common to see the counter settle around 55 fps. 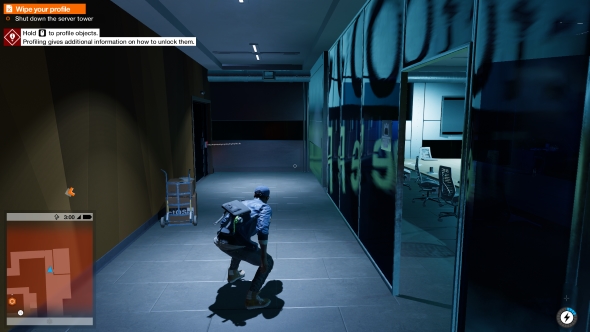 Should your system not be up to ultra, you don’t have to sacrifice much when dialing down to high. There’s a few more jagged edges, which in this scene are most notably visible on the back of the chair in the office, and on the pipework at the end of the corridor. The shadow beneath Marcus is also not as sharp as on ultra, but the pixelated edges are a small tradeoff for the performance gains.

At high, our system pushes out frame rates in the mid-70s pretty consistently, regardless of if we’re playing in the open-world or interior levels. In less busy areas 80 fps is achievable, while more intensive sequences will see it dip into the high-60s. 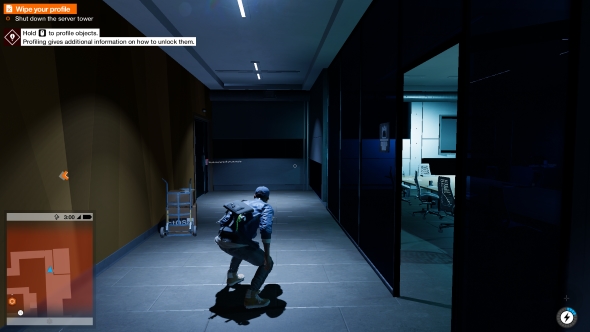 You can instantly see that medium offers significantly degraded quality when compared to the high preset. The most obvious change is the lack of reflection on the glass wall, but the whole scene is also darker thanks to less complex lighting. It appears as if a light source has been removed, with the end of the corridor much darker than on high. Jagged edges are more prevalent, with the edges of the floor tiles rougher than previously.

Such sacrifices do ensure high frame rates, though. Expect to see figures predominantly in the mid-90s, dipping down to the high-80s, or rising as far as 110 fps when the going is good. 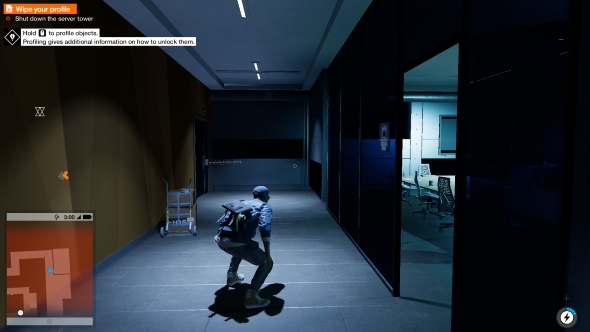 The lowest preset is where things become really quite ugly thanks to the textures taking a real hit. You can see the wallpaper pattern loses definition between the segments of orange shades, and the ctOS sticker on the cardboard boxes is blurry. The same issues can be seen on Marcus, with his badges looking like splotches of colour rather than meme designs. Even the HUD effects are affected, with the wavelength decal by the door at the end of the corridor looking smudged.

The result of such a graphical drop is a frame rate that’s very frequently in excess of 100 fps. And when it’s lower than that, it’s never typically less than 90 fps. It makes for an incredibly smooth experience, albeit one that feels somewhat like GTA in the early 2000s.

For a quick comparison between the best and worst the game can look on these presets, take a look at these city-set screenshots below. You can see the poorer lighting does the game no favours at low, and the reduction in texture quality really affects every element. There’s also a lot of reflective surfaces, be that the glass of a skyscraper, the bodywork of a car, or even shiny paint on the road. With reflections turned off, Watch Dogs 2 is a notably duller looking game. 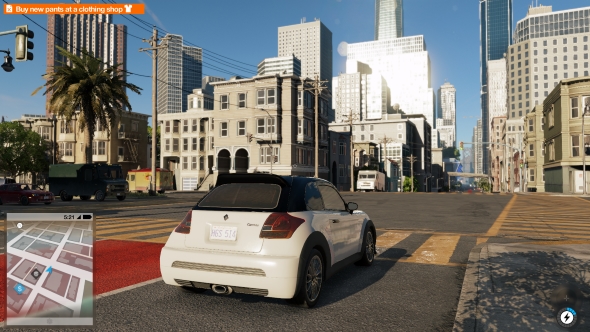 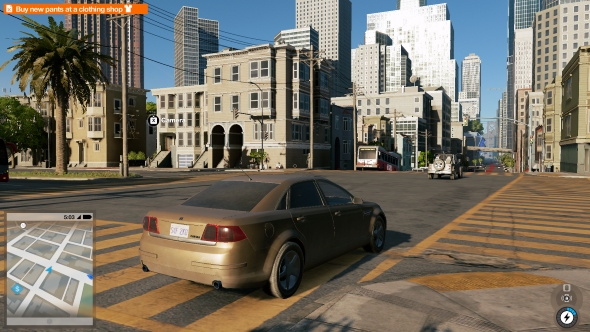 To see how Watch Dogs 2 performs on different hardware, we have tested the game on four different graphics cards; two from Nvidia, and two from AMD. We’ve sampled from both the current and last generation of GPUs in order to offer the most useful information.

All four cards are tested on the game’s ultra preset, which dials every texture option up as high as they’ll go. It uses HMSSAO ambient occlusion, a proprietary technology developed by Ubisoft that was first used in the original Watch Dogs. It’s essentially a less-powerful version of Nvidia’s HBAO+. As for anti-aliasing, ultra uses SMAA (it’s a single setting with no option for 2x or 4x). For the test we perform a live in-game benchmark with a 60-second duration, which comprises a variety of the game’s activities (driving, running, climbing, fighting). The same 60-second section is played three times to gain an average, and the process repeated on all four of the test GPUs.

As you can see, Nvidia wins out this time, with a high of 48 fps on ultra settings when using the GTX 1060, beating AMD’s RX 470 by eight frames. The 1060 is more consistent too, only bottoming out at 41 fps, while the 470 falls as low as 27 fps. A similar story can be seen in the previous generation cards, with the GTX 970 having the edge over the R9 380. These frame rates may seem a little low, but this benchmark is run at the game’s highest ultra preset.

The results are no big surprise considering the partnership between Ubisoft and Nvidia on Watch Dogs 2. With GameWorks tech being used as part of the PC port, the engine is optimised for GeForce graphics cards.

What is a surprise though is how low the frame rates are on the current-generation cards. Considering the GTX 1060 is Ubisoft’s recommended GPU for Watch Dogs 2, we’d expect to see something much closer to 60 fps, especially since we’re only testing at 1080p.

As you can see in the video above, playing Watch Dogs 2 on ultra settings with a GTX 1060 doesn’t result in a nice, smooth 60 fps. It’s clear some settings need adjusting. In this section we comb through every graphics option on each of our four test GPUs in order to find out how to run Watch Dogs 2 at an average of 60 fps. It is here where we discover which settings make an impact, and advise what to enable or disable in order to get the best results from your graphics card. 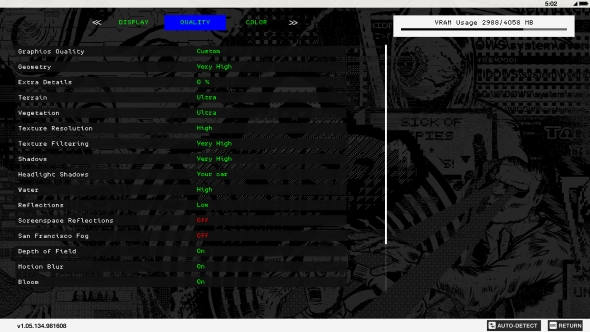 If you’re running the incredibly popular GTX 970, then the good news is that you’ll be able to play with a large majority of the settings turned up. Geometry, texture filtering, and shadows can be set to very high, while terrain and vegetation can be turned up to ultra. You’ll have to opt for a more modest high for texture resolution and water, however. Be sure to drop reflections down to low though; while it means water will only reflect the sky, it helps save a good 5 fps. You’ll want to turn San Francisco fog off, too; it’s a real hog on the frame rate whether it appears on screen or not, and while it does look lovely the fog only appears every 3-5 in-game days.

Set your ambient occlusion to HMSSAO and anti-aliasing to SMAA, and you’ll be on your way to 60 fps. 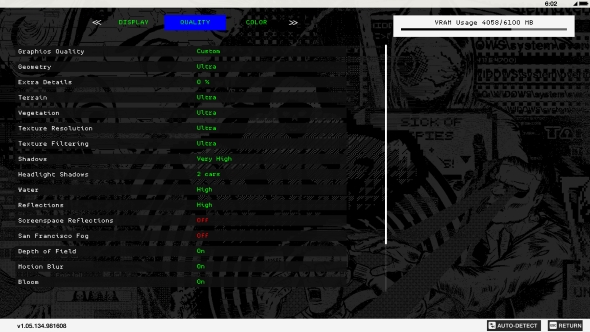 For those of you running this year’s Pascal-powered GTX 1060 card, ultra settings on most options is easy to maintain. Geometry, terrain, vegetation, texture resolution and texture filtering can all be set at the maximum, while shadows only need to be dropped to very high. Water and reflections need to be set to high, with HMSSAO and SMAA. As with the GTX 970, you’ll want to turn off San Francisco fog if you want a consistent 60 fps; it’s a really intensive effect. 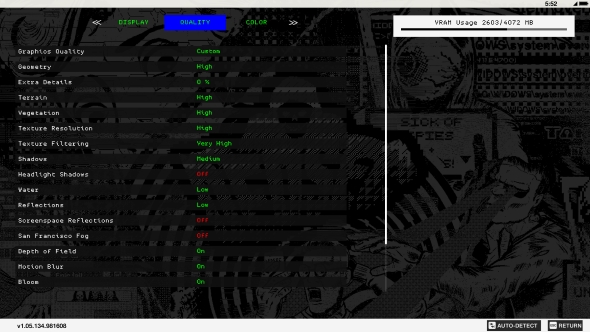 If your rig sports an R9 380 you’ll have to make the most concessions. Thankfully many of the high settings are still within grasp, so use that for geometry, terrain, vegetation, and texture resolution. You can knock texture filtering up to very high, but shadows will need to be kept at medium due to being notably intensive. You’ll also have to turn off headlight shadows, in addition to San Francisco fog, too. Set ambient occlusion to the less demanding SSBC setting, and use FXAA for anti-aliasing. With that done, you’ll be good to go at 60 fps. 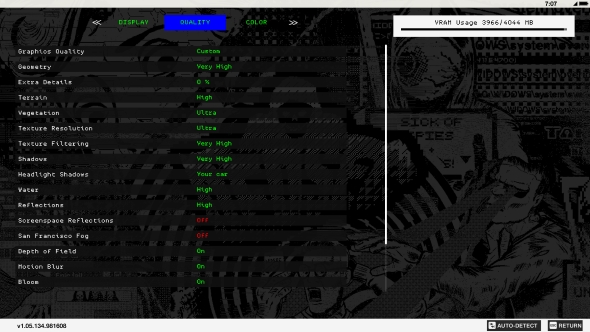 This year’s AMD card allows you far more power to engage more of those higher settings. Geometry, texture filtering, and shadows can be all set to very high, while vegetation and texture resolution can be dialed in at ultra. Water and reflections need to be a little lower and set to high, and San Francisco fog turned off. Ambient occlusion at SSBC and anti-aliasing at FXAA should have you all set up for 60 fps.

We may have had to wait several days after the console release for Watch Dogs 2 to launch on PC, but it seems that the time was mostly well spent. Ubisoft have created a respectable port; one that never goes beyond the call of duty, but one that is satisfactory in the majority of areas.

It doesn’t escape criticism; we’d expect better performance at 1080p ultra settings on Ubisoft’s suggested GTX 1060. An average of 48 fps feels quite low for reccomended specs, and while we’ve been able to run at above 60 fps on the card, it’s clear that for the best performance you’re going to need the GTX 1070.

Thanks to the numerous options though it’s an easy game to tweak, and 60 fps is achievable on a good variety of cards without sacrificing too much.

For those with powerful rigs (or anyone willing to suffer a frame rate hit), the San Francisco fog effect is quite something, rolling in across the bay and providing that authentic SF downtown vibe. It really is intensive though, and not at all necessary.

Be sure to install the latest drivers too; both Nvida and AMD have put out new builds that support Watch Dogs 2. With those in place, you should be able to get a trouble-free experience.