After spending the entirety of Watch Dogs Legion convincing a ragtag band of Londoners from various walks of life to join together and save the city from Albion’s evil clutches, it’s a bit of a shame that you can only battle their goons on your tod. Even though you spend ages convincing Doug the accountant and Leah the accountant and Frank the accountant that it’s their noble calling to join DedSec, they’re all a bit busy when you actually need them fighting by your side, so you’ve got to bare-knuckle box a drone by yourself. Sorry mate.

But no longer! The Watch Dogs Legion online mode release date is on the horizon, and it’ll allow us to team up and fight the good fight with up to three other accountants (apparently there are other professions in the game, but not in my fiscally sound DedSec). Fellow staffer Dave Irwin and I had an opportunity to preview Watch Dogs Legion’s multiplayer mode, and took to the streets of … well, we were calling it ‘dystopian’ future London, but we might settle for authoritarian rule if it meant we could clown around on busy city streets with mates on a clear evening.

Anyway. Legion’s multiplayer takes part after the main storyline’s conclusion, and is a standalone experience. After we each acquire a new recruit for multiplayer, we join Matt and Jesse from IGN, and begin working our way through a playlist of co-op missions.

Piling into a makeshift taxi, we head out to our first objective: infiltrating a compound and stealthily disposing of some sensitive material. Dave’s DedSec agent unfortunately experiences a serious case of cold feet; as soon as he enters the compound, he finds himself physically unable to walk beyond a certain point. No matter how much gentle encouragement we apply – running him over with a car, for example – he refuses to participate. Despite this setback, and our apparent inability to navigate stealth games, we somehow complete the first stage of our mission, hop on a boat – at which point, Dave’s agent magically reappears beside us – and successfully complete the first quest (after a small, inconsequential team wipe). 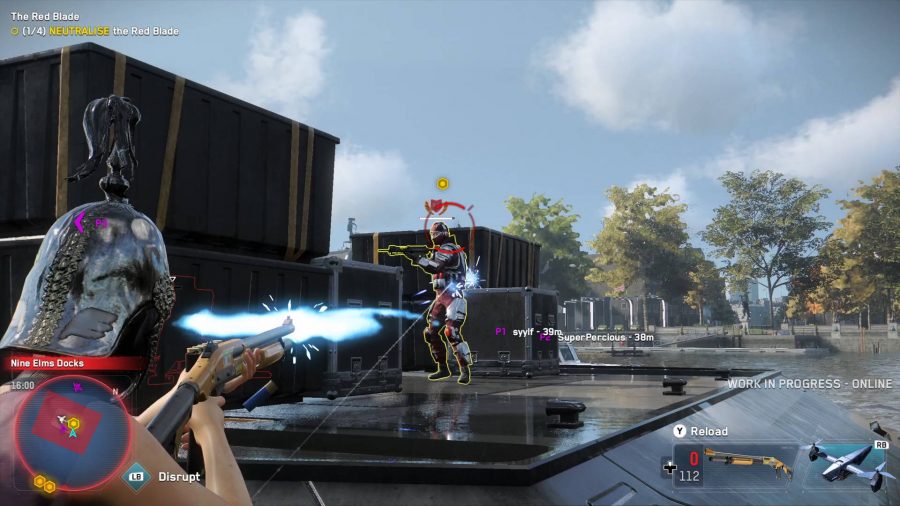 Approaching the second mission, we make good use of Watch Dogs Legion’s hacking mechanic to survey the site where a fellow DedSec operative is being held captive. Remotely accessing cameras and drones is even more helpful in multiplayer – by piecing together info from multiple sources, we assemble a plan of attack, covering one another by distracting guards and disabling drones at opportune moments.

I play the babysitter, making sure enemy drones don't spot our cabal of zoned-out thumb twitchers

This flawless plan quickly unravels as we bungle yet another stealth approach. Chaos ensues. The mission requires us to access a series of computer terminals, so we split into pairs, buying each other precious time by sending missile drones whizzing through the air like fireworks – and after some good old simultaneous button pressing, our target is free. Agent Dave even makes it through without getting stuck on anything; things are looking up.

Buoyed by this success, we hop onto some motorbikes and zip over to the next part of the mission, which involves hijacking a couple of cars and steering them into the Thames. Alas, this proves to be more than we’re capable of. The cars themselves are locked behind a pair of closed gates, which we don’t think to unlock until it’s too late. In retrospect, we should have done some more reconnaissance, but we were too excited to dunk our cars in the drink. Mission failed. 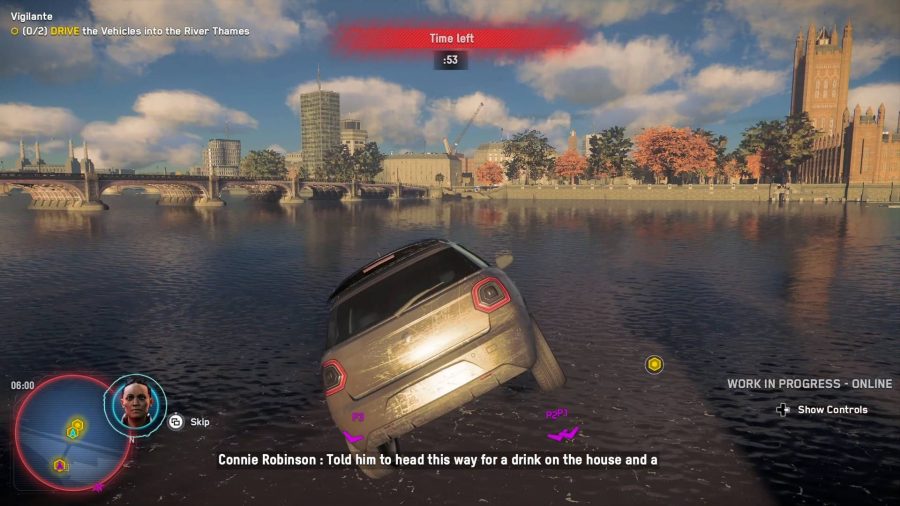 There are no checkpoints in this multiplayer mission, so we are sent right back to the start. The whole thing goes more smoothly the second time round, and before long, we’re steering our stolen vehicles toward a conveniently placed ramp. When the wheels of the second car leave the ground the driver’s game crashes. His car barrels gracefully into the Thames, but with no player inside the landing doesn’t register. Mission failed.

a bizarre, terrifying collision bug dumps us all out of the server

Fine. Round three. Hack the thing, nab the geezer from the compound – all routine by now. We do most of the hacking with drones and I play the part of babysitter, making sure enemy surveillance doesn’t catch a glimpse of our cabal of zoned-out thumb twitchers hiding behind a kiosk. Next we march toward our second objective, eliminate the guards, and slide into the target vehicles once again. Someone – who shall remain nameless – drives straight into a barrel, causing a bizarre, terrifying collision bug that disconnects us all from the server.

Related: Here are the best co-op games on PC

You may have noticed a theme by now. It’s worth pointing out that our play session took place a couple of months before Watch Dogs Legion’s online mode is set to go live, so hopefully a few of these issues will have been ironed out. 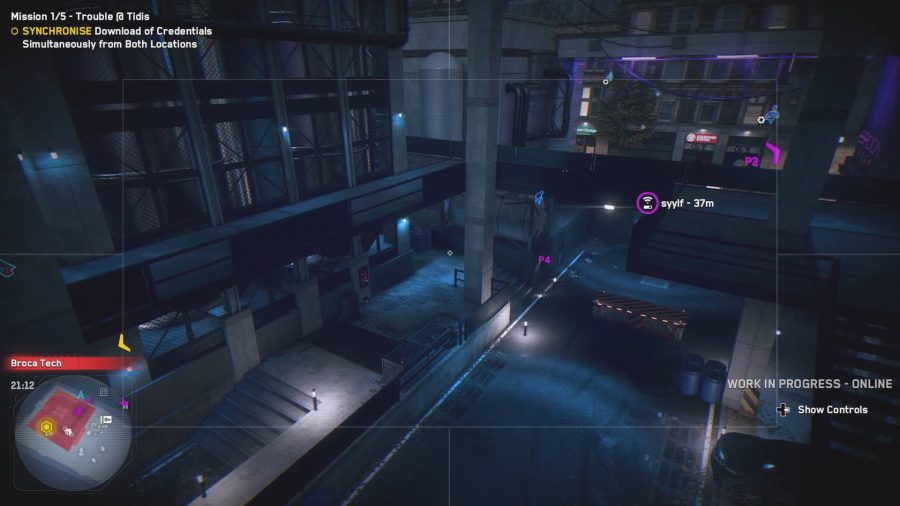 After reconnecting, we decide to vent our frustrations in the Spiderbot arena. This PvP minigame runs flawlessly, the four of us skittering around and leaping across the terrain, racing to pick up healing items and power-ups while trying not to get blown to bits. It’s a casual, fast-paced deathmatch with all sorts of overpowered weapons to grab – think rocket launchers and auto-aiming guns – and killstreaks to add to the chaos.

Next, we try a Tactical Op, which splits the party in two. Dave and I head to one site, while IGN drives to the other side of town. We then have to download data simultaneously; Dave is on camera duty, and I pilot my spiderbot around the area in search of the download hub. Great strategy in theory, but one of us is killed when the enemy calls in a flood of reinforcements, causing another mission failure. Fair enough: we like a challenge, but we fail again thanks to a connection problem, before being promptly dumped out of the server on our third attempt.

We do make it through the entire co-op playlist, eventually, and the way Ubisoft has adapted Legion’s puzzles and gameplay to suit multiplayer is impressive when it works. Coming together as a team to steer all the moving parts into place, even if the momentum was interrupted by some connectivity issues, is hugely satisfying. And when your plans crumble before your eyes it’s still a lot of chaotic fun.

Watch Dogs Legion’s online mode releases on March 9. It’ll be a free update for owners of the game, but if you’re yet to pick it up and the promise of multiplayer mayhem might tempt you, maybe wait and see if the issues have been fixed first.