I’m standing on a rainy street near Embankment in London, in the middle of the afternoon. Shouting voices cut through the steady hum of traffic and chatter – a man is kneeling on the pavement, and over him stands a heavily armed ‘peacekeeper’. These are members of the private military outfit called Albion, employed to monitor citizens after a series of terrorist attacks were carried out in Britain’s capital.

Most pedestrians scurry past, but a young man in a leather jacket darts across the street, ripping the tape from the arrestee’s wrists. The Albion agent decks him in the face. The vigilante falls, then curls up into a cowering ball in the middle of the street. The Albion enforcer punches him again, then backs up, watching him struggle to stand. I turn away; behind me I can hear the sound of the good samaritan hitting the ground again.

What use am I, you might ask – a member of organised resistance movement DedSec, formed to bring justice and freedom back to the streets of London – if I don’t step in and help? Well, I tried that. Albion goons are on every street corner. The sky is full of their drones. I’ve grabbed them in chokeholds as they subdued their victims, I’ve slammed them into the gutters, I’ve darted around corners to escape pursuit.

I got involved in every scrap, every unjust arrest that I saw unfold before me, until I bit off more than I could chew by taking on several Albion thugs at once. I nearly managed to knock one of them into the Thames – a truly terrible fate – but alas, he punched first, took me down, and arrested me. The character I had been playing was locked away, and I took control of one of the other DedSec agents. 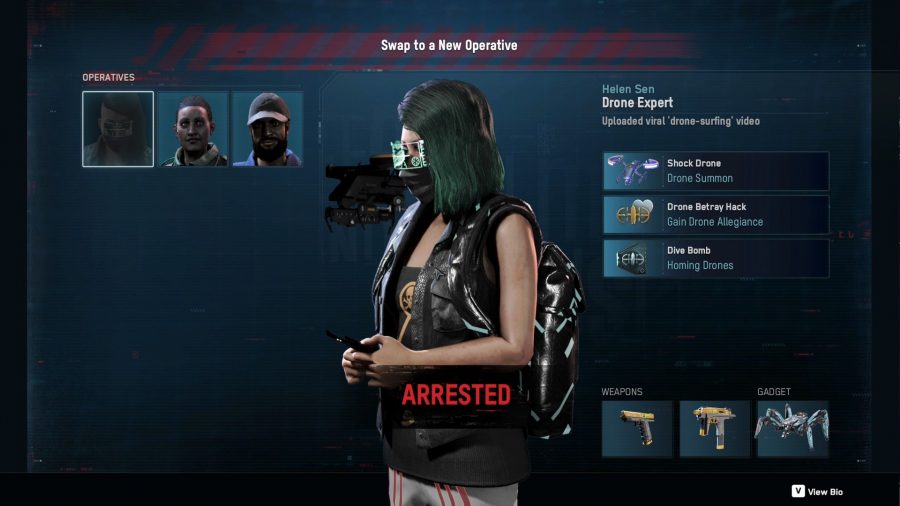 This twist on the game-over screen makes perfect sense. A game when you reload whenever you fail creates a canonical version of events in which your hero is infallible; throughout Watch Dogs Legion, your agents will be arrested, hospitalised, and even killed throughout your campaign to liberate London.

Problem was, I was still right at the start of my Watch Dogs Legion hands-on session, so I didn’t really want to find out what happens when all my allies were put out of commission because I couldn’t stop punching every baddie I saw. So instead, I walked past that man in Embankment as he lay cowering in a puddle, instead of getting embroiled in an endless loop of indignant interference. It didn’t feel good.

Fortunately, any DedSec agents who end up in prison or hospital are only temporarily locked out of your roster – they’re unavailable for a chunk of in-game time, which varies depending on who you’ve got on staff. Having a legal professional on the team, for example, will reduce the amount of time your agents spend incarcerated. 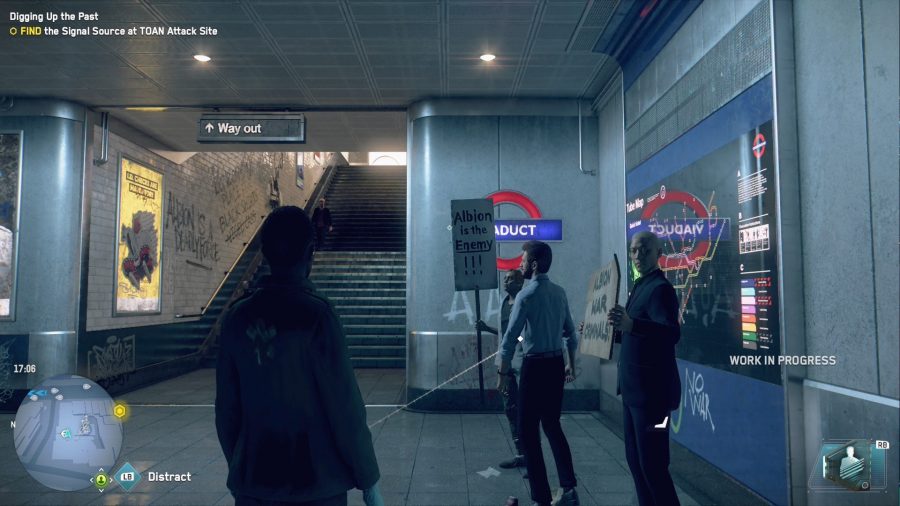 Since I accidentally got my drone expert, Helen Sen, arrested, the game points me to a barrister I can recruit to help get her freed sooner, so I fast-travel to Viaduct tube station in Holborn (which, Google tells me, was once a real London tube station, replaced in 1990 by City Thameslink. Neat). Down a side street, I find Deimos Sotiropoulos, the barrister – he’s wearing suit pants, a khaki shirt, and a bowler hat.

Deimos has the skill ‘Flatulent’, which means he alerts nearby enemies to his presence

He’s also gyrating slowly in a circle, writhing hypnotically to the beat of some tune only he can hear. Upon inspection, he indeed has the skill ‘Bail Out’, which reduces the arrest time of teammates. He also has the skill – and it is a skill – ‘Flatulent’, which means he alerts nearby enemies to his presence. Apparently, he recently searched for ‘hold in farts where do they go’. Sadly, his recruitment mission doesn’t involve finding the answer to this conundrum. 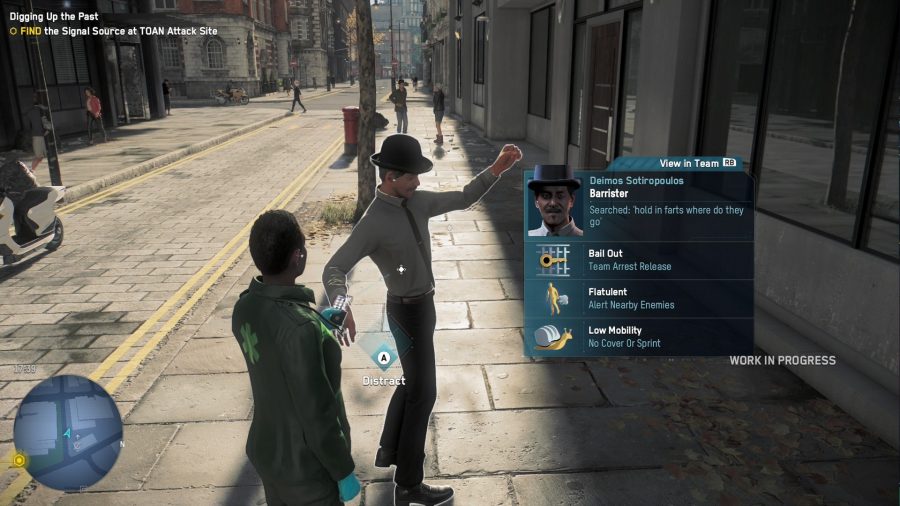 The streets of dystopian London are full of complex characters like our gassy friend Deimos, each with their own tales of persecution at the hands of Albion, and their own opinions on DedSec. If I stop someone on the streets, no matter who they are, they’ll engage me in open conversation – and I feel a kind of misty eyed solidarity with my London brethren; I’ll recruit the cleaner sweeping in Trafalgar Square, and the drunk old man in the Camden pub, and the woman weeping at the Blackfriars memorial, and together we will rise up and take our city back.

Of course, if you tried starting a conversation with a stranger in actual real-life London, chances are they would act like you literally did not exist, so there’s a thrill in escaping the anonymity of the bustling streets and getting to know the people I meet on my commute across the city.

London is full of people who have something to offer, even if they’re farting constantly in the process

Most people have heard of the bystander effect – something terrible might be happening before your eyes, but with enough witnesses, it’s easy to step back and reassure yourself that someone else will step in. The way to combat this is to give explicit instructions to passers-by; ask them to call an ambulance, pass you their jacket, clear a path. Watch Dogs Legion demonstrates how, under the right circumstances, every single person on London’s streets is capable of not only these basic tasks, but of contributing significantly to the fight for freedom when called upon. London is full to the brim with main characters; everyday people who have something important to offer, even if they’re farting constantly in the process. 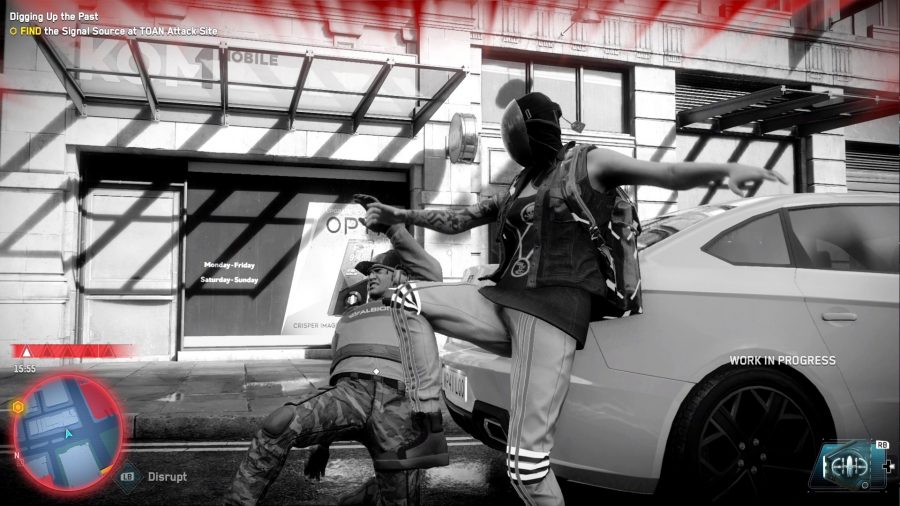 Aside from throwing punches and meeting potential recruits, I spent much of my time with Watch Dogs Legion sneaking around and hacking things, in an attempt to uncover evidence from the bombings that plunged London into a full-blown surveillance state. Exploring London – and this is bona fide London town, make no mistake – is a joy on its own, but Ubisoft’s cheeky humour keeps you bobbing along from mission to mission, balancing out the harrowing sight of Londoners unjustly detained.

There may be little in the way of nuance in the game’s plot – megacorporations bad, private law enforcement bad, take back the streets – but because it’s London’s streets we’re fighting for, to me at least, the stakes are as high as the Gherkin. And as long as I’ve got teammates left, I’ll deck every crooked cop I see.