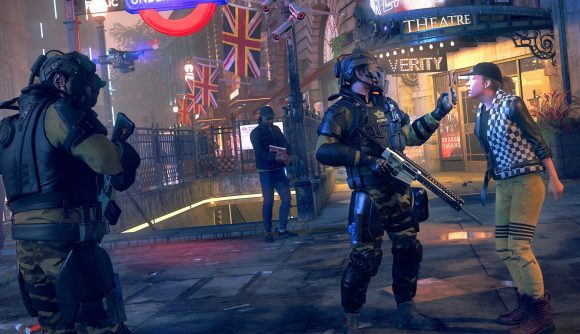 For Watch Dogs: Legion, the series is visiting London, for a drone-heavy open-world game about the underworld of England’s capital, and we now have a release date. You can join DedSec’s English division on the Epic Games Store and Uplay on October 29.

The announcement was made in a new gameplay trailer during today’s Ubisoft Forward, watchable below. In the third outing of the series, every NPC is a possible recruit, with their own stats and backstory, hinting towards the titular legion. A previous trailer actually showed the extent of this feature, showcasing gameplay of an old woman named Helen joining the effort, infiltrating a police compound, and taking out her enemies like any young, spry protagonist.

This new trailer expands on that, showing some of the cut-scenes and ways your various heroes will interact. Part of playing will be switching between characters depending on what resources you need. If you need a drone, find a hacker, if there’s a bunch of enemies that need to be taken down, someone with some heavy weaponry, if you need to sneak into somewhere, your mate’s granny is the way to go. You strategise as you add more members to DedSec’s ranks in London’s war on oppression.

You can watch the new trailer below:

Watch Dogs: Legion will release on the Epic Games Store and Uplay on October 29.