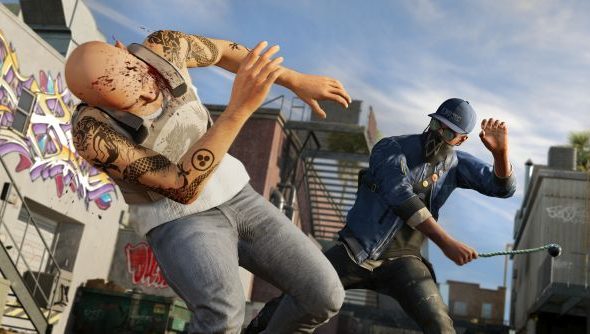 Whatever you may think of the final product, Ubisoft put a lot of time and effort into Watch Dogs. More than that, they built a recognisable character in Aiden Pierce. For Watch Dogs 2, they’ve got rid of him however – an uncommong practice in their games. From Splinter Cell to Assassin’s Creed, once they have someone noticable they generally stick to him. So – why change?

Watch more E3 coverage with the best PC gaming news site on the web. Us. It’s us. We’re talking about us.

“You need to start with the setting to answer that question,” says Jonathan Morin, creative director. “When we decided to go for the bay area and we started to explore and went there and listened to companies in Silicon Valley, listened to the vibes of these different areas, it became obvious that we wanted to have a hacker that was a bit younger. Someone that could bring this ‘everything is possible’ type of attitude that happens in the California and in the valley area.”

Aiden, basically, was a bit too sad and old for San Francisco. That wasn’t specifically a flaw in him, says Morin, but meant they felt a change was needed. “So for us it was more that than necessarily having to absolutely change Aiden or anything like that. With a new place came a new character and at the same time we listen to the fans a lot, and they talked about the narrative of the first game versus the fantasy. By going there, with the Silicon Valley, and this new character as a member of Dedsec, it gave us all the tools to go a lot deeper to the promise.”

That fantasy, of course, is being an all-powerful hacker. However, to put you into that fantasy, Ubi also want you to be able to customise your character more. Marcus is equipped for that.

“I think the one thing we did that’s different this time around is that we pushed the customisation of Marcus a lot. You do have this pre-set image, to help the association, he’s always gonna have his mask, he’s always gonna have his bag cause he carries his stuff. You can change them all, and the rest, if you want. Me personally, I’m the kind of guy who will rapidly change his appearance, I relate more with the character when I decided how he dressed. I think these steps are important.”