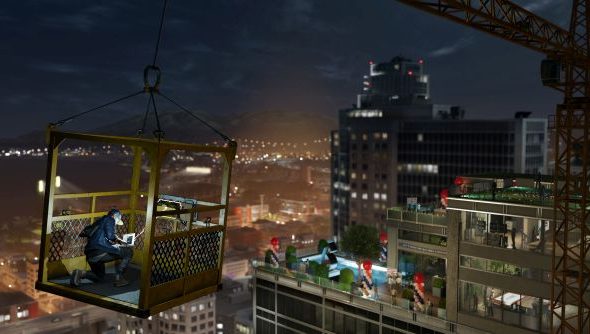 Climbing towers –  it’s been a thing in many Ubisoft games since Assassin’s Creed popularised it. In the first Watch Dogs they were present in the form of CTOS towers, miniature climbing puzzles which unlocked points of interest on the map upon completion.

Here’s theWatch Dogs 2 release date, trailer, gameplay, pre-order, and everything else we know.

Far Cry 3 had towers, too. Hell, even open-world racer The Crew had the driving equivelant. Fortunately, this formulaic system won’t be present in Watch Dogs 2.

“It’s not a game where you open your map and everything’s there,” Watch Dogs creative director Jonathan Morin tells Eurogamer, presumably pointing at the iconic, icon-cluttered maps of previous Ubisoft games. “There are no towers. You just explore the world.”

Instead of progression being tied to hoovering up icons, it’s attached to your follower count, which acts like a Twitter-fueled experience guage. Reaching a certain point triggers the next big job.

“Players start with a few followers in [hacker group] DedSec but pretty soon you realise you’re going to need more if you want to pull off big operations. So you start free-roaming,” Morin continues.

“Every time you get followers, it’s like you’re unlocking the DedSec hivemind. You’re also unlocking new knowledge, new operations, new co-op missions. And then organically you hit those end-game milestones.”

Apparently you can even ignore the story if you want.”You can barely touch the story,” Morin explains. “You have many different operations which give you followers, which guide your progression. Within the story there are three “milestones” to hit which finish the game’s narrative, but mathematically you can unlock everything else through co-op or free-roam.”