Time for real talk. Real, if slightly dated, talk. In my incredibly not humble opinion, Watch Dogs has within it the potential to be the best of all the open world games. It’s just been painfully underserved in the original version. It makes me so furious I want to write about it at length.

If you’re searching for some open-world games that aren’t broken, check out the best PC sandbox games.

Here’s the thing that frustrates me. Watch Dogs has all the other bits of GTA: the driving, the shooting, the hiding behind cars and the catapulting pedestrians into the ocean. Over and above that, it has a slightly noddy stealth system, and those foresaken towers*

In Watch Dogs, you can turn things on and off, raise things up or down, or move things left or right. There’s no graduation in the cranes/bridges/absurdly placed cherry-pickers. As the Grand Old Duke of York could have said: “When the drawbridge in downtown Chicago is up, it is up, and when it is down, it is most definitely down.” 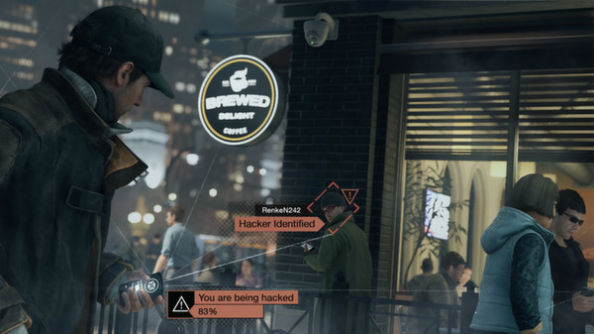 Now, here’s the thing. What if, and this is going to blow your mind, you could raise things a little bit. Not a lot, just a little. The bridge could be halfway up and down.

I think this could fundamentally change the way Watch Dogs works. Because if you’ve got more finesse over the control of a city, you can have way more fun with it. You can tinker.

What if you could raise the city bridges by a little bit, rather than open or close. That’s a recipe for spending an evening launching high-speed motorbikes into orbit. (see fig. 1)

Fig 1. Look how happy this man is. 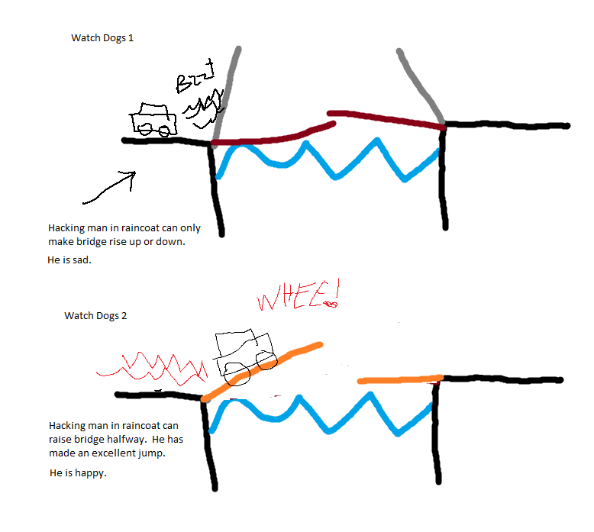 What if, by giving players more control over how cranes move their payloads, you let them explore more of the city’s rooftops and inaccessible places? What if, by putting two hackable systems next to each-other – say, radios and cranes – you let players aim and plan their destruction, rather than triggering pre-built traps. Imagine how much freedom you could give to your game designers, if you gave them analogue, rather than digital, controls. 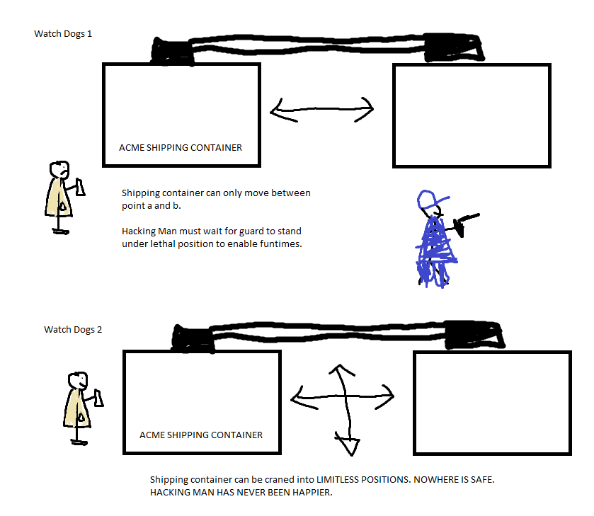 I get why the first game didn’t allow this level of granularity. Letting players loose with systems like this is scary: it’s sure to release all manner of bugs/odd situations. You just know that within 20 minutes, exploits and bizarre videos will appear. It’s clearly built to be accessible, too. Risking the launch of a many millions of dollars franchise on a hacking subsystem that takes a bit of learning might be a scary prospect. 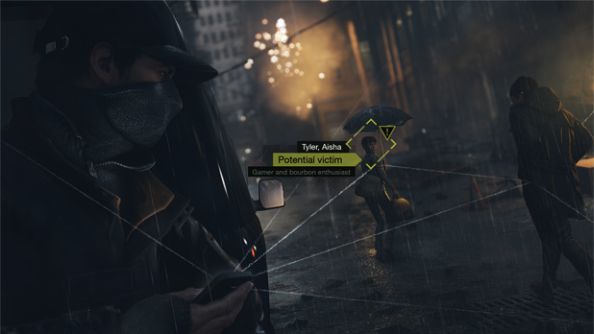 Watch Dogs’ hacking should make you feel powerful and curious. It should feel like a sandbox, a system that allows for devious plans to be made, fail, and made again.

In its current form, it really doesn’t. Fixing in Watch Dogs 2 should be priority number one.

*Imagine being the tower puzzle designer in Ubisoft. Imagine how good you’d be, after five years of carefully constructed ascension puzzles. Imagine what a thrill you’d get from thinking up a new way to momentarily confuse a player’s route up a seven-storey television mast. Imagine thinking: “Oh balls, in 2016 I need to make 20 for The Division, 20 for Far Cry Primal, and another 20 for Watch Dogs 2.”