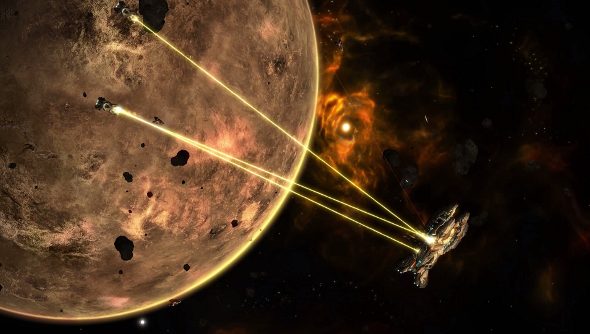 Wayward Terran Frontier: Zero Falls is quite the mouthful and the sort of name you’re going to forget in five minutes, but maybe you shouldn’t. It’s an indie space game that’s part trading and spaceship sim, part action RPG, with a style that’s not unlike Gratuitous Space Battles.

Players will be given command over a space station and custom ships in a procedural, infinite universe where NPC factions go about their business, at least until you board their ships and start murdering their crews, if that’s your cup of tea.

“Our dream is to make the ultimate space-trader open world exploration game by allowing you to disable and board any ship in the universe and get into a gunfight with their crew,” says lead developer George Hultgren.

Killing everyone doesn’t sound like a solid business plan for traders, but when you can tear ships apart, set them on fire, crush them or simply just get inside them and start hunting down their crews does it really matter? Maybe you could be selling plots in the afterlife.

Here’s how the developers, Reason Generator Inc., describe the combat:

“The first thing you will notice is there are no health bars in space. That’s because every active ship is fully simulated during combat with living crew making decisions, conduits delivering power, engines providing thrust, and mounts rotating guns. A ship is defeated when its crew is defeated, it is disabled when its crew can no longer fight back. This takes the concept of subsystem targeting to the extreme. A lucky shot might ignite a capacitor bank and start a raging fire, or a well aimed volley could detonate a reactor core and end the fight instantly. You can learn your enemy’s weak spots to gain an edge in combat, and you can learn your own weak spots in order to survive.”

Even ship atmospheres are simulated in detail, with the engine calculating the flow of air between different rooms and out of hull breaches.

The game’s been in development for multiple years, but now it’s on Kickstarter. Reason Generator needs $20,000 to finish it, and with 21 days to go, just shy of $15,500 has been pledged.