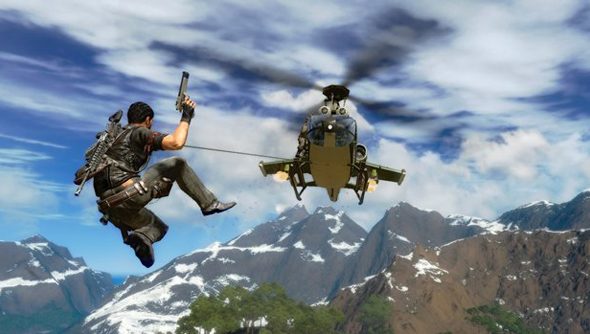 JC2MP is an uncharacteristically small scale name for a multiplayer revamp that’s anything but.

This is a mod which takes a world at the mercy of one agent of mass destruction and empties an entire bag of agents over it. A mod which offers the grapple-chuting, perma-exploding cacophony of a game played as it was never intended – or rather precisely as it was intended, but amplified to a never-foreseen degree. A mod which introduces the fictional South-East Asian island of Panau to a whole new meaning for the phrase ‘state of emergency’.

A mod which is about to receive the greatest possible honour: its own green button on Steam.

Just Cause 2 was already the game for those of us who ever tried to do something absurd in an open world and found the simulation too unyielding. All JC2MP’s team have done is opened its promise even wider, in such a way that it somehow doesn’t crash to desktop every second minute.

What they haven’t done is eliminated its many possible glitches – but you’ll be hard pressed to find one in the video below which doesn’t enhance the experience in some sense:

The JC2MP team last reported progress midway through last week’s 0.1.0 beta test, and admitted they’d had a “rocky start” scuppered by lag spikes and server crashes. Past the first day, however, they were able to squash many of those issues and “massively” increase stability, reliability and performance in time for today’s official release.

Just Cause 2 is currently £9.99 on Steam, and its attendant mod will cost nothing extra when it arrives in about six and a half hours.

My favourite thing about Just Cause: every motorcycle abandoned mid-jump explodes, apropos of nothing. Wistful sigh. What’s yours?