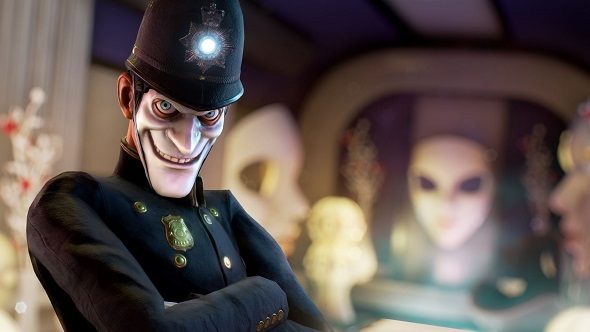 There seems to be a bidding war going on in Hollywood at the moment, as production companies are buying up the rights to various videogame properties. Rather than picking another triple A title, the next game set to hit the silver screen is Compulsion Games’ We Happy Few.

If you’re looking for a spook, check out these terrifying PC horror games.

Announced by Variety on Friday, the project is set to be helmed by Gold Circle Entertainment, the production company behind such classics as Pitch Perfect and My Big Fat Greek Wedding. Dj2 Entertainment are also collaborating with Compulsion Games to bring the project to fruition, with their CEO Dmitri M. Johnson and chief content officer Dan Jevons set to produce the film. It is still in the very early stages of pre-production, with dj2 and Gold Circle currently on the lookout for writers for the project.

According to head developer at Compulsion Games Guillaume Provost, “[Gold Circle Entertainment and dj2] approached us enthusiastically with really solid ideas about how to adapt our game to film while retaining its menace, dark humor, and central themes.” For those who aren’t familiar with We Happy Few, it’s a horror survival game set in the 1960s, where the player is trapped within an open-air prison in the form of a quintessential English town. To suppress the populace, all prisoners are given a drug called Joy which makes the world appear as a idyllic wonderland. Upon refusing to take their daily dose of Joy, the player discovers the true horror and gruesome reality of the town.

We Happy Few is still in Steam Early Access, making it the first early access game to be considered for a movie. The premise certainly lends itself to a gripping mystery, but it begs the question how development of the film will proceed when the game is still in production.

This project isn’t dj2’s first crack at making a videogame film though, as the company are also signed on to produce both the Sonic the Hedgehog and Sleeping Dogs movies. They also helped produce a Skulls of the Shogun animated series and a live-action Hawken short.

While it has been optioned as a potential project, it is not guaranteed that a We Happy Few film will make it to a cinema near you. The scriptwriting process is an arduous one, with many drafts left on the cutting room floor. Even then, many videogames films have been trapped in development hell for several years before being canned. I’m still waiting for that John Woo directed Metroid movie. Hopefully, We Happy Few will be one of the success stories coming out the recent videogame film gold rush.