You might remember We Happy Few as an inspired, darkly funny trailer about Orwellian office life that didn’t quite carry through to the game that was released in Early Access – a survival and stealth-focused roguelike with little in the way of direct storytelling.

You might have dismissed it. But if you haven’t checked in over the past couple of years, there’s a good chance you don’t know what We Happy Few is any more.

Procedurally generated environments had previously covered for a lack of staff resource behind the game, which is why it was overlooked by many. But new funding from Gearbox has since bolstered the development team, and what was originally planned as a quick, replayable adventure is now a story campaign over 20 hours long.

For more ambitious first-person storytelling, check our list of the best FPS games on PC.

In short, Compulsion Games has spent the past few years closing the gulf between the survival game they had, and the first-person adventure players hooked by that trailer wanted and expected.

It’s the story of a game’s almost total reinvention in the face of community feedback. We talked to PR and community developer Naila Hadjas to find out more. 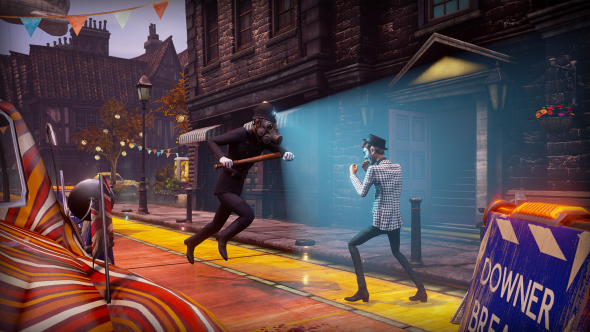 PCGamesN: We Happy Few has been significantly improved since I played it nearly three years ago. Does any procedural generation remain, or is everything handcrafted now?

Naila Hadjas: The game is an unusual combination of handcrafted story and side encounters located in procedural areas. We Happy Few is hard to fit into a genre; it has become its own thing really.

The original vision for the game was ambitious but wasn’t received in a universally positive manner. How did you feel about that feedback?

NH: We’ve been doing open development with We Happy Few since the beginning. We knew what we were building was complex and that we would need all the feedback we could get from the community in order to make the best game we can. The feedback we received was really helpful and we changed the game based on it.

What triggered the rework?

NH: We gathered all the feedback we received and took a hard look back on the game. Along with reworking our survival mechanics (thirst and hunger no longer kill you, they now act as a buff and debuff), we realised the beginning of the game wasn’t doing a good enough job in introducing the player to the world.

The game’s mechanics weren’t clear either. At first this was intentional since we were building a hardcore experience where we wanted our players to be dropped in a world where they would have to learn to survive the hard way. But we realised that this was too confusing and that if our players get frustrated too early on, there was a chance they would not get to experience the rest of the game and its story. 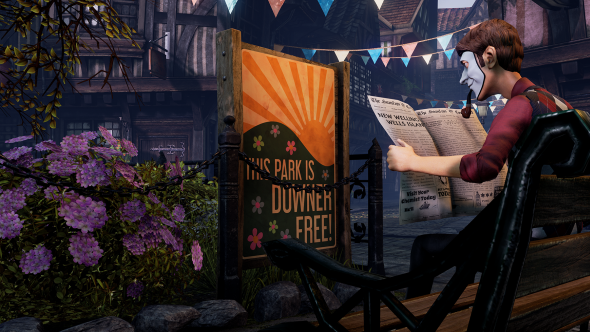 Is the new build of the game closer to your original vision of the game, or is this something new?

NH: The story and the world is similar, but it is now almost a completely different game. What started as a hardcore survival roguelike game meant to be replayed over and over in three or four hour playthroughs is now a fully story-driven action adventure game with survival-inspired elements.

We always had a story, but we decided to expand on it since this is what the community seemed more interested in. The game is no longer a survival game but it still has survival elements to it. Thematically, that is relevant to the story we are trying to tell. Stealth and combat are still present but our characters now have a skill tree.

How do you feel about the feedback the game received from E3?

NH: We couldn’t be happier. We’ve been completely quiet about the story for so long so as to not spoil it during Early Access, to the point where no one believed we even had a story. So to finally be able to show the world what we’ve been working behind closed doors has been really gratifying. We are really happy, not only that our story trailer has been a hit, but also that those who played the hour-long demo after having played the Early Access are loving the changes we made.

Everything felt very polished, heartfelt, and funny in the demo. How have your ambitions for story and gameplay expanded?

NH: Alex Epstein, our narrative director, has been writing the game since the beginning of the project. He writes day and night for it, to the point where we need to sometimes cut some text and dialogue down because it had about 20,000. When we made the decision to give players the game they wanted, which was a full story-driven game, he was ecstatic. We even hired a second writer, Lisa Hunter, Alex’s longtime writing partner and wife, and together they created this incredibly rich world full of very wacky yet real characters.

Some of the elements that were added include audio flashbacks and a lot more environmental narrative. Gameplay wise, the key change has been the addition of a skill tree for our main characters – this alone expanded the gameplay into a multitude of playthrough variations. We went from a roguelike survival game to a fully-fledged, story-driven action adventure game and a campaign of over 20 hours.