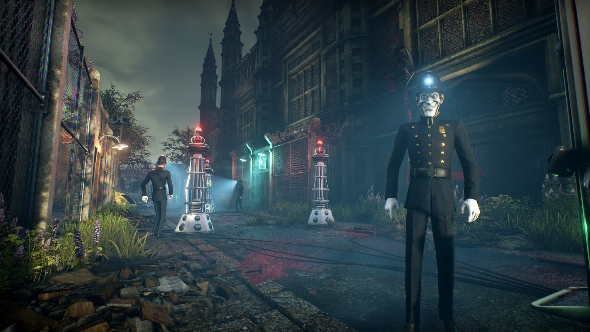 We Happy Few is an interesting beast. As Phil noted in his first impressions piece, it combines a tightly-scripted, arresting opening with a pretty typical survival game core. One moment you’re engrossed in a fascinating dystopian workplace, the next you’re rifling through drawers for bits of string. In many ways it’s a monumental letdown, especially after E3 trailers that appeared to promise us the next Bioshock. But despite this, I think We Happy Few offers a very interesting look at how one genre’s systems can be forced to serve the motivations of another.

Like the challenge of staying alive? Try these other brutal survival games.

I have a theory: developers Compulsion Games wanted to make a narrative-heavy, Bioshock-like experience with We Happy Few, but the constrictions of being a small studio shattered such ambitions. So what did they do? Rather than give up, they adapted a genre that requires far fewer resources and made it tell the story they’re desperate to share.

As we all know, survival sims are a comparatively cheap genre to develop. Once the map, characters, and systems are produced, it’s up to players to get on with it and make their own fun. No need to script, perform, and animate set-pieces. No requirement to build a hundred unique environments. No demands for carefully orchestrated boss battles. You can see why pretty much every survival game in existence is made by a small studio.

The interesting thing is how We Happy Few uses conventional survival sim systems to tell its story. I’ve played the game for a few hours now, and have explored two distinct areas of faux London borough Wellington Wells: the crumbling, decrepit zone inhabited by ‘downers’ (people who have rejected the Joy drug everyone’s hooked on) and the drug-fuelled wonderland just across the bridge from it. Both areas demand you do a lot of ‘surviving’, so there’s plenty of eating old mushrooms and trying to find beds to sleep in, but there’s also a little more to it.

You see, We Happy Few is a social stealth game. As with many survival sims, keeping out of combat is pretty important, especially when you’ve yet to craft any decent gear. But while something like DayZ promotes cowering in long grass, that’s not an option in We Happy Few. Because you’re walking through a town that’s completely populated, your only option is to hide in plain sight. You must pretend to be like those around you in order to survive.

By doing so, the story of Wellington Wells begins to bleed through. Having to blend in teaches you much about these citizens and their circumstances. The very first area you arrive at suggests that choosing to reject Joy could be a bad idea: the people here have devolved into a state of perpetual madness, staggering around apparently oblivious that they are mumbling to no one other than themselves. 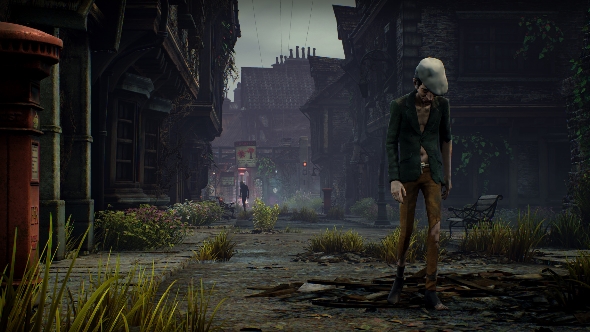 “Bugger off!” shrieks a woman as I walk a little too close to her. Tapping the ‘talk’ key makes my character mumble his own nonsense, which seems to convince her that I’m no threat. She goes back into her own little word and stumbles off down the cobbled street, seemingly having already forgotten I’d disturbed her day.

People shriek, cry, or get violent when you encroach on their personal bubble (sleeping in someone’s bed is asking for a temper tantrum), but most of the time they’re so zoned out that walking from house to house isn’t so tough. It’s as if coming off the drug has the same effect that we in the real world associate with substance abuse. It’s a fun subversion of expectations. At the very least, it explains why there’s a chap drinking battery fluid instead of preaching The Truth.

As with more traditional story-based games, We Happy Few ramps up the difficulty as you enter subsequent levels. The following area is a handsome place where the inhabitants are all jacked up on Joy, and here the stealth requirements double down. Running in the streets instantly gives you away as a downer, so you need to calmly parade around as if you haven’t a care in the world (nor a desperate need to find something to eat within the next ten seconds). Not sounding off with a chirpy “Hello!” will have the neighbours eying you up, and you’re likely to be lynched for looking too inquisitive, so keep away from those drawers. Indeed, giving in and popping a few Joy pills makes things notably easier, putting a literal spring in your step. Can you stave off the addiction to an easier life? 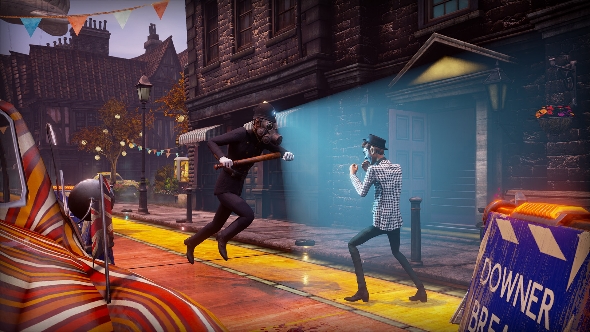 Aside from a population that appears as hateful towards downers as real 1960s people were of communism, the way NPCs react to you also teaches you that Wellington Wells is a corrupt place indeed. If a member of its terrifying, white-faced Police force stares down at you, truncheon in hand, offering up some whiskey will convince him to turn a blind eye to you as he swigs straight from the bottle. Coming off Joy may be the most heinous crime around in this society, but a suspected downer offering up a bottle of Jack is considered a saint by the apparently alcoholic constabulary. No doubt about it, this is the 1960s.

There’s something more sinister than boozy bobbies though: taps. As your thirst meter flashes red and you seek out something to drink, you soon discover that water from the kitchen sink drugs you with Joy. Taking the chemical isn’t a choice at all: the government have been doping the population with every cup of tea and shower they take.

This is a really interesting way of building a universe: environmental storytelling built into systems. We’d never know that Joy was in the water supply if we didn’t need to fend off thirst. We wouldn’t realise the police were corrupt if they didn’t respond to our actions, and would fail to understand the intricacies of this society’s behaviour if we weren’t forced to fit in. 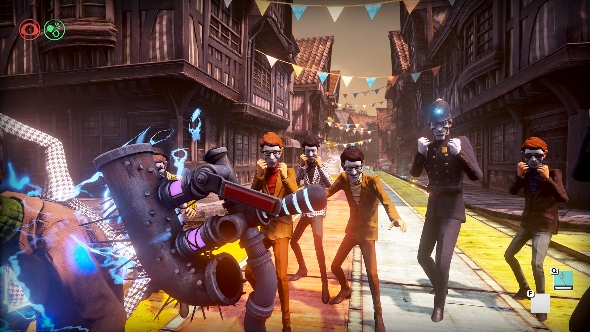 At the very start of We Happy Few there’s a waste paper bin that’s shaped like the bottom half of a Dalek, an icon synonymous with the 1960s. And, in many ways, We Happy Few reminds me of 1960s Doctor Who: a show that desperately wanted to tell fantastic and fascinating sci-fi stories, but only had the budget to realise that vision in bubble wrap and PVA glue. What viewers got may have been somewhat disappointing, but there was still undeniably a bit of magic there.

We Happy Few may not have the budget to create a rollercoaster ride of British rebellion, but it’s turned cheap to develop mechanics into a nightmarish dystopia that, for all its frustrating meter-monitoring nonsense, still has some magnetic magic. Compulsion promise that Steam Early Access updates will add additional narrative segments like those seen in the prologue, but perhaps it doesn’t need need to. For all the excitement those chapters could add, the real intrigue comes from the nervous terror of just trying to survive among Wellington Wells’ white-faced junkies.