A rival weed dealer has moved into my nightclub. Worse yet, they announce their arrival to my face – the audacity! Enraged at the move, and worried about how it may affect my budding weed empire, I use my connections in the local police force to seize their assets, sending their plans up in smoke. If anyone is going to be slinging weed around here, it’s going to be me.

But wait! Before a swarm of blue lights rushes to my house and bashes down my front door, I should mention that I’m talking about my experiences inside of Weedcraft Inc, an upcoming tycoon game from the Polish studio Vile Monarch. It’s a sandbox that sets out to test morals, letting you create your own weed business, either legally or illegally, and managing it with aggressive or more compassionate means.

The topic is a perfect fit for the tycoon genre. After all, the laws surrounding marijuana are often complex and contradictory, and tycoon games are all about making order from chaos. Yet the genre is often also understood to be lighthearted and played for laughs, which is something the developer wants to avoid. Vile Monarch doesn’t want Weedcraft Inc to just be a joke for people into weed culture and Seth Rogen movies – though that seems unavoidable. The hope is that it also helps to introduce people to the more serious aspects of marijuana use, especially in the US.

“It’s a huge challenge for us,” game director Kacper Kwiatkowski tells me. “And we’re still working on it. But that was the initial [goal] – we wanted to show the two faces of weed. We thought that to be fair to the subject matter we needed to represent both. Like, if we went just pure seriousness, just corporate, just human drama, that wouldn’t really feel like a weed game. People have some expectations.”

In a clear effort to reflect reality, then, each of Weedcraft Inc’s campaigns have you start out in a different city, all with unique laws surrounding marijuana that play into the unfolding story. The first campaign follows a son taking over a family business in a rundown apartment building in Flint, Michigan after the death of his father, while the second follows an ex-prisoner in Denver, Colorado who has been given a loan to start their own weed business. From there, you’ll then have to rent or buy properties where you can grow your own supply and sell your product to consumers.

“You have to work around the system to make it work,” Kwiatkowski says. “Sometimes you’re forced to do it criminally if you want to be a weed entrepreneur. But, at some point in the game, you’re able to change these laws. You become so powerful that you can shape the situation to your needs.”

The process of growing weed in the game is represented by clicker elements, inspired by games like Farmville. For instance, you’ll need to tap a water icon above a plant to ensure it’s watered thoroughly, while holding down a scissor icon and releasing it at the correct time makes a plant grow faster. 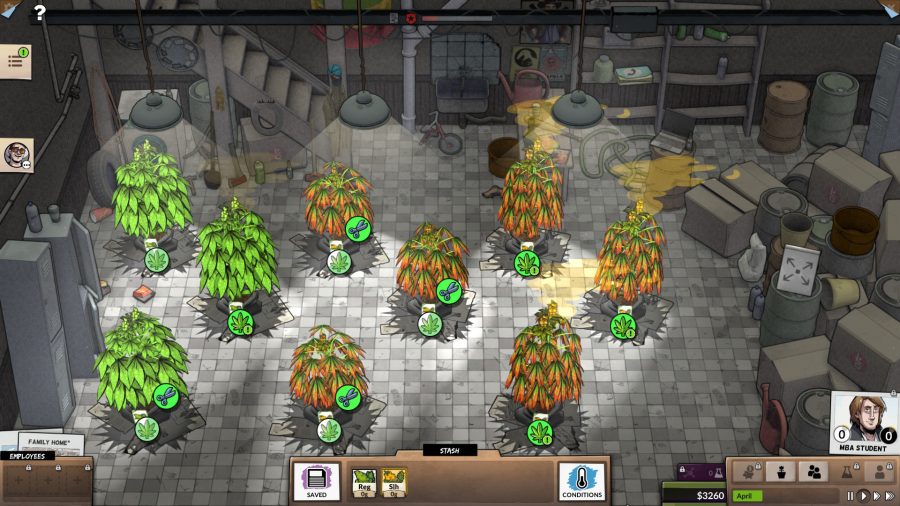 But Weedcraft Inc goes beyond what you’d expect from a clicker game in its simulation of growing green. I’m able to change the lighting, the strain, the type of soil, the chemical components, and the flavour, with all of these factors helping to produce a better product and improve my popularity among consumers. On top of this, I can also buy fans to cool down the temperature of the room, and purchase humidifiers to purify the air and make sure the police don’t catch on to my growing business.

Once I have enough cash I’m able to employ some extra hands. Employees in the game help automate the process of cultivating weed, letting you spend time away from the production side of the business. Though, understandably, they need to be paid a wage and can be arrested if you’re not careful, which means you’ll have to find some way of bailing them out when they’re behind bars. The employees I hire are fairly useless to begin with, but after a couple of months I’m able to upgrade their abilities and designate points into cultivation, salesmanship, and their ability to find out gossip about the competition.

There is some effort put into making your employees feel more like people and less like machines, but it’s basic at best. I can form bonds by talking to them to get info on their likes and dislikes. The resulting conversations are brief, reduced to repeated statements about TV shows and hobbies, but it does lead to some of Weedcraft Inc’s most testing conflicts. When I fall into debt and can’t pay my employees’ wages, the employee I got to know is more likely to understand my plight, while the others go for the jugular and demand their pay. 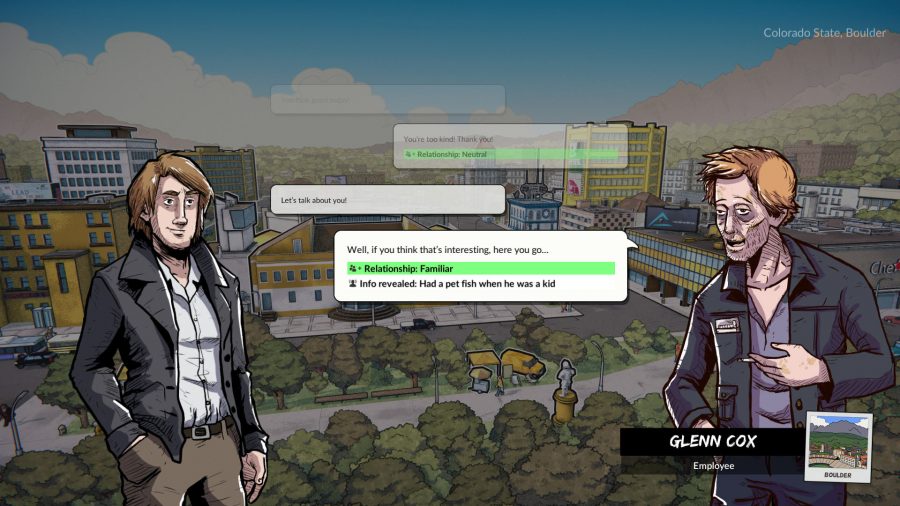 “The fantasy of being a boss is literally like taking care of your employees,” narrative designer Alek Sajnach says. “We wanted to have that aspect in our game. As we were playing around with the idea, it [became] something that could be [expanded] out into the other mechanics, such as talking to the competition, talking to the police and politicians, and stuff like that. We thought it was the way to go because the topic of marijuana is very human.”

As much as you should want to look after your employees just on principal, there are other benefits to doing so in Weedcraft Inc. Employees you’re on friendly terms with are more likely to carry out illegal activities for you, which means maintaining friendships is a valid strategy for getting an edge on your competition. Your charm can also be used to convince police officers and politicians to turn a blind eye to crime or accept bribes, or even change the laws of the city you’re in – from marijuana being illegal to allowing it for medicinal and eventually recreational use.

Your competitors are also susceptible to sweet talking and can be persuaded to leave a particular marketplace or lend you the secret to one of their successful strains if you develop a rapport with them. This gives you a tremendous amount of freedom when approaching the campaign’s objectives, which is great – so long as all the possibilities have been accounted for. Unfortunately, that doesn’t seem to be the case in the build I’m playing. 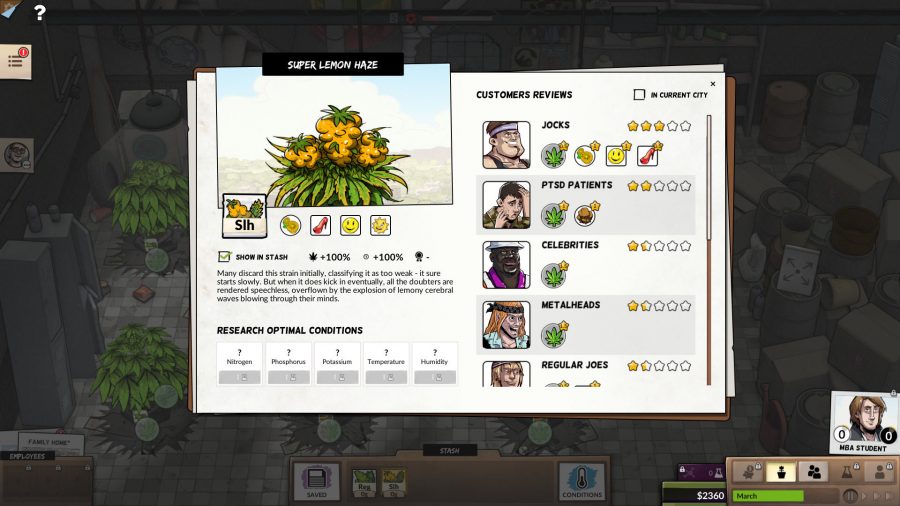 In the Denver campaign I’m tasked with ruining a competitor’s business. Instead of aggressively pushing them out I decide to befriend and then sabotage them behind their back. The competitor’s business quickly fails and the person who had previously been on good terms with me is now calling me names as part of the campaign’s dialogue. However, as soon as that conversation finishes, they switch back to being my friend, as if nothing had happened. The game’s sandbox seems to have become momentarily detached from the campaign.