It’s been a quiet weekend, but that’s because the team have been stuffing themselves with chocolate. Everyone is winding down from PAX and GDC, our poor, event-ridden Rob goes back into hibernation. It’s Easter though, and that means chocolate and time to play games. Here’s what the teams been playing this week:

When I read in an interview with PC Gamer, that “there was a scene in the game at the end where one of our artists got to a point in the game, played it, turned off BioShock, opened up his computer, opened Microsoft Word, and wrote a resignation letter. It had offended him so much,” I’d put it down to hyperbole, one of those bollocks statements developers make in press junkets to big up their game. Then, before I even entered the flying city of Columba, I came across a scene I found profoundly uncomfortable. I didn’t consider quitting the game but I spent a good while looking for an alternative to what the game was asking me to do.

To get into Columbia you must be baptised.

I don’t want to be baptised. I’ve no desire to take part in that ceremony again, I certainly don’t want to in a game, either. You have to initiate the baptism in Bioshock, too. Activating the priest (videogames, eh) lets you pass through to Columbia and all that fun stuff we saw in the trailers. I wanted there to be another way through. I tried to get out of the circle of acolytes, to see if there was another route past the priest, but you are trapped in by the white robed believers. Eventually, I asked him to baptise me into their church.

I can’t think of an action in a game that has made me have quite so strong a reaction, I was repulsed by what the game was making me do. Something of the strength of the reaction I think comes from the lack of choice – though, I could have chosen to quit the game. I’m still too early in the game to know how frequent a theme religion is to become – though I suspect ‘very’ – but from my reaction to this scene I wonder if I, too, will be firing off an email to Levine when I reach the end point that had his artist threatening to resign. 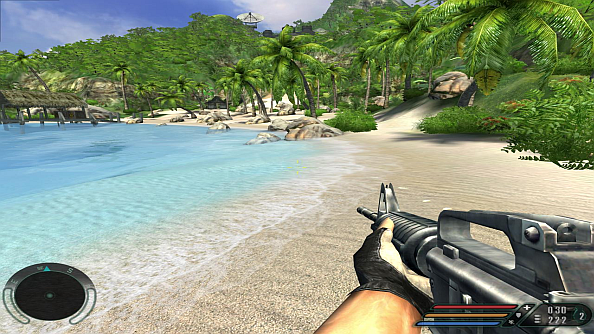 About a month ago, Crytek king Cevat Yerli told me that when working on Far Cry, the dev team adopted a self-consciously B movie approach to storytelling. I wasn’t entirely sure what he meant until yesterday afternoon, when I watched crop-topped, pilotless-helicopter bound CIA agent Valerie Cortez kick protagonist Jack Carver in the face to save his life.

Y’know, I suspect that Crytek have to bite their tongues very hard indeed when told that Crysis 3 isn’t half the sandpit their debut was. Evidently nobody remembers that Far Cry frequently funnelled its players through chrome corridors – there both to give its levels somewhere to get changed in private, and to make the intervening beaches and forests more meaningful places to play.

But I’m still loving Far Cry. Things are always moving about, which is nice. Trucks are loaded and unloaded, helicopters despatched and landed, mutant apes suppressed and succombed to by their former masters. And the AI is still really, truly impressive stuff, nearly a decade later. Actually, ‘impressive’ is an insufficiently aloof definition – ‘alarming’ is better, especially when a half a squad of grumpy mercs successfully flank and flush you out in the brush. Oh, sorry – you thought you controlled the space? The pushes and pulls, the how and whens? Well, be careful – this sandbox is quicksand. 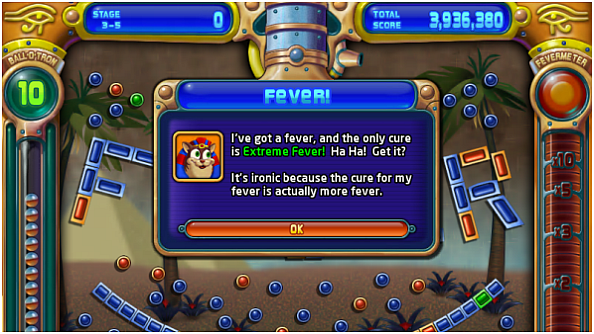 I’ve played a few games this week, but if I’m going to be straight up, honest and undisguised, then I have to admit that I’ve played Peggle the most.

You might remember that, earlier this week, Peggle was released for free. I have a dim recollection of downloading the game and then nothing more. Suddenly, it was the next morning and I was very tired, having not slept nearly as much as I should have. These past few days I’ve played every level in Peggle several times over. I’ve unlocked every character. I’ve topped some of the scoreboards, though I won’t be satisfied until I rule them all.

It’s not much more than a modern reinterpretation of Arkanoid with something of a pinball twist and a few special powers thrown in, but that’s all it needs to be to give me endless hours of fun. The special powers are actually really rather clever, each of them providing a very distinct advantage that might or might not suit you depending on how you play. The levels are also quite deviously designed and, though the concept behind Peggle is extremely simple, many of them are very challenging. The game isn’t a jerk about anything, though, and if at first you don’t succeed, it’s quite happy for you to just try again.

There can be quite a lot of elitism about casual versus serious gaming, about the value of one compared to the other. Personally, I don’t feel any animosity towards casual games or casual gamers but, I have to admit, I do take sides: that casual stuff just isn’t my bag. I’ll be sticking with my Peggle, because that game is the most serious of serious business.

(Also, the screenshot above clearly demonstrates some of the best writing in any video game ever.) 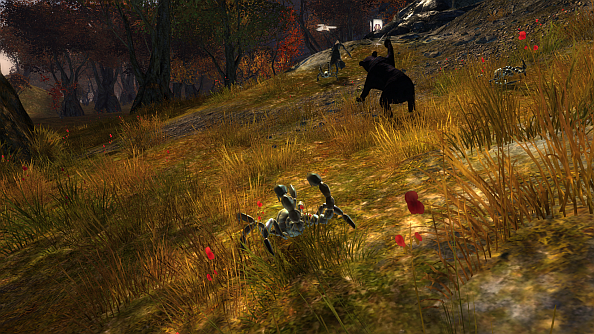 I’m still on my quest for my legendary longbow, Kudzu, slowly gathering all the ingredients. I’m over half way there now, finally getting the last of my 77 Mystic Clovers, and finishing the Gift of Kudzu. That coupled with my precursor weapon puts me at around four weeks until completion by my watch.

The most recent patch included some nice additions to the Living Story, giving players some more adventures as the story progresses, soon to be concluded in late April.

But before that, there’s something else on the horizon. All I can say is log in tonight between 11pm-midnight for something spectacular, and check the site tomorrow morning for more Guild Wars 2 news.

A big thank you to the Going Postal guild on Desolation for letting me par-take in their Guild Rush event for some extra loot. Guild Leader “Hexdragon” and his followers are all nice chaps, feel free to whisper him for a friendly community.