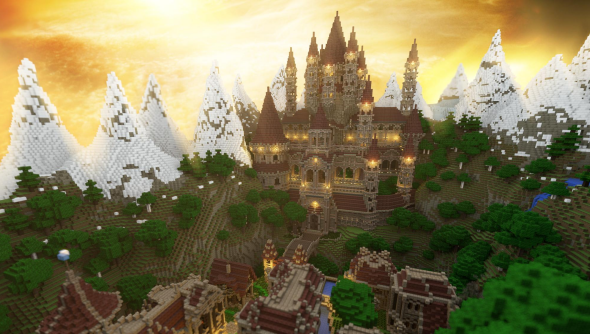 It’s the Sunday before Christmas and so, sensibly, drank until becoming insensible last night. Now as you grab for distractions to try and repress images of swapping clothes, dangerous drinking games, and the mess that was left in the bathroom (and the shower) you fall upon your old friend computer games. Well, this is what we’ve been using to draw our attention this week.

I’m smelting copper as I type this. There’s a spider on my roof.

A friend of mine set up a Tekkit server a few days ago and invited several of us to play. Since then, I’ve been busy carving out a moat, making bricks and mining for tin. I’ve also realised how little I really know about the Tekkit mod pack, which doesn’t so much alter Minecraft as completely reinvent it.

One of my favourite things to do in the game is build with other people. It doesn’t have to be alongside them and on the same project, it can merely be in the same neighbourhood. I like to see what people choose to build, how they build it and what aspects of the game they pay most attention to. Do they prefer to mine? Do they like underground lairs? Do they like to build tall, elaborate towers, embellished with detail?

Playing with other people also seems to involve an ever-increasing cycle of harassment and mental torture, as we start to leave messages or “surprises” for each other, begin critiquing elements of construction style or ever so subtly alter one another’s creations. Co-operative Minecraft is all about finding and pressing people’s buttons until they finally snap. Or maybe that’s just us. I’ve recently re-subbed to WoW to try out Mists of Pandaria, which is fabled to be a much better expansion than Cataclysm. If it’s one thing I’m going to do is to just always keep a copy of WoW updated on my PC. The pain of downloading this gargantuan, not to mention finding and reinstalling all your old mods was nearly enough to put me off it all together.

Installation aside, I jumped in to discover a myriad of changes. For perspective, I stopped playing WoW just as Dragon Soul was introduced. Talents have been totally reworked, shrunken down to just a few active/passive abilities. It also seems there is a huge incentive to constantly adapt your spec in accordance to what the fight requires, something that only bodes well for the raiding scene.

Thankfully my account was intact, even after being hacked multiple times on my vacation. After a few hours studying how each class has been affected, I have chosen to roll with my Death Knight over my Shaman. This is mainly because I was on a quest to attain both of the legendary Warglaives from The Black Temple. At first this was in hopes you could transmogrify them, until Blizzard decided they wouldn’t allow legendaries at all. Still, I already have one, so I might as well hedge my bets every week for the second.

Wait, isn’t there a whole new expansion to play through? In last week’s Playlist I wrote “Super Hexagon is a pure game. It has no story, no tutorial, no pause menu, no characters (well, sort of).” Without explaining what I meant about the characters. It’s the patterns. You get to know the patterns.

The standard open hexagon pattern is the most common shape you’ll come across, it approaches the centre, trying to enclose your triangle in a wide-armed hug, leaving one of its six sides open for you to dodge through. At first it seems to be a pretty plain shape but as you come across more and more of the open hexagons – sometimes three or four in a row, each with a different side open, forcing you to dart around between them, you realise they’re a playful pattern. Teasing you.

It’s the squares that are the most abrasive fuckers. The squares, like the open hexagon, converge with one side open, one exit, but because they’re squares, and have fewer sides, they also provide you with less space to maneuver your turn. What this means is that when the squares begin to march towards you you’ve a lot less time to react and you can’t afford any slip ups or backtracks.

The pattern you’re really looking out for is the spiral. They’re not too rare but infrequent enough that each time you see one you feel a flutter of warm endorphins fill your brain. The spirals are simple to navigate, you line up with the entrance and simply turn clockwise (or anti-clockwise) and watch your triangle thread between the angular pattern. It’s easily the friendliest pattern.

Though after a while, and I’ve now spent 26 hours with the game, all the patterns begin to change temperament as you learn their behaviour. It’s not that the patterns are trying to kill you, they too playful for that, always giving you just the amount of time to get through the gaps, they’re playing with you. All of them. What that says about the triangle though, which is constantly looking to escape their embrace, I don’t know. We’ll see if I can work it out by the time I hit 50 hours. I’m a big fan of New Year’s pre-resolutions. It’s only mid-December, but dammit, there’s going to be some changes next year. And one of them is that I’m going to become a competent StarCraft 2 player. There’s never been a better time for it: Heart of the Swarm gives us all a chance at a clean slate.

So I’ve been spending time with the beta and getting back up to speed with it, although so far I’ve chiefly been reminded how bad I am at StarCraft 2. That’s given me a chance to employ some novel new strategies that I suspect pros will not have even tried yet, like the Ineffectual Widow Mine Wall. It may not help keep the Zerg at bay, but it sure makes me feel better for a little while.

Of course, I won’t be playing much of anything this weekend because I’m making the 1000 mile trek home to the Zacny family homestead in Indiana. But I have a pretty decent laptop, and through the miracle of Good Old Games I should have plenty of things to play on it. Perhaps this is the Winter of Wadjet Eye?

{"schema":{"page":{"content":{"headline":"The Weekly Playlist: the one where Paul tries to break his friends’ minds and Jules’ brain snaps after too much Super Hexagon","type":"news","category":"world-of-warcraft"},"user":{"loginstatus":false},"game":{"publisher":"Blizzard Entertainment","genre":"MMO","title":"World of Warcraft","genres":["MMO","RPG","Subscription"]}}}}