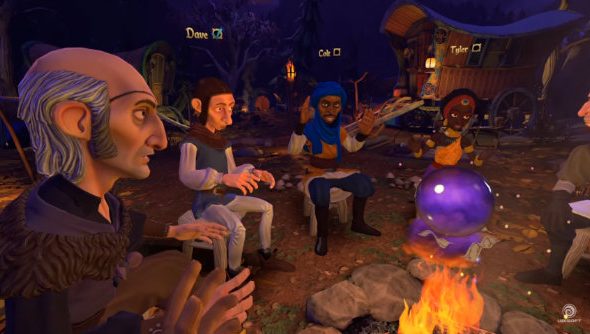 This could be a lot of fun. Developed by Red Storm, Werewolves Within looks to take the deception and human interaction of traditional tabletop games and transfer it into videogames via the power of VR.

This tabletop apporach to a social game sounds like a novel approach, but you can still get one over on your friends in a lot of the games in our list of PC’s best strategy games.

In Werewolves Within, five to eight players are transported to the medieval village of Gallowston, a place being terrorised by werewolves. Obviously the whole being killed by werewolves thing has been breeding paranoia among the residents, so they conduct regular meetings to try and find the beasts hiding among them.

Each player is assigned a random role, and everyone must work together to uncover the werewolf. Or, in the case of the werewolf, do their best to deceive everyone else.

This being VR, you’ll be able to lean in and whisper to the person next to you, point fingers, stand up, cross your arms, or use your body language for pantomime-style tells. You’ll be able to do this with private or public matches, and even a mix of the two.

“VR is proving to be an amazing platform for social interaction, moving toward truly feeling like you are there with other people,” said David Votypka, senior creative director at Red Storm Entertainment. “Werewolves Within gives players a taste of how VR can generate strong social connections, allowing you to get together to have a great time with others no matter how near or far they are.”

Have a watch of the debut trailer:

Werewolves Within marks the latest venture into VR for Ubisoft, who recently announced the game Eagle Flight and a VR partnership with the film company, SpectreVision. Werewolves Within will launch across all major VR platforms in autumn this year.