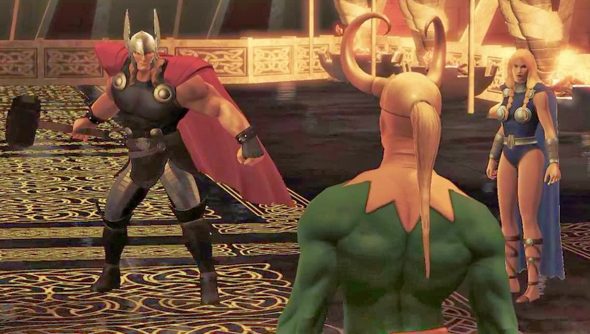 Update: All the keys have now been given out. Thanks to everyone who entered and have a great Christmas!

Update: Comments on this article are now closed – we’ll be picking the winners and sending the codes out shortly.

Loki has the attention and curiosity of the filmgoing public locked down. He has Tom Hiddleston’s looks, which transcend greasy hair with ease; a Shakespearean delivery that’ll shake even the haughtiest action cinemaphobe out of their slumber; and an inherently relatable mix of wibbling rivalry and unrelenting megalomania.

Since his arrival in Marvel Heroes, you can also add frost giant-summoning and crippling ice magic to his list of tricks.

So, er. How would you like to be Loki, for an indefinite period?

Each of our keys unlocks Loki as an unplayable character – plus a two hour buff which increases the chance of finding rare items, and a consumable card usually dropped by end game bosses that can grant players a pet, a costume, or something else entirely.

To be eligible for a key, you’ll need to create an account on this here site, and triple check you’ve provided us with an email address – either on sign-up or on your profile page.

Then: let us know you’re interested in the comments of this post. Say something, anything at all, so long as it’s nice. Our Nick will then begin the slow and very manual business of mailing the keys out individually, incanting each and every commenter’s name as he does so. It gets weird.

If you’re lucky enough to find one in your inbox, you’ll want to log in to the Marvel Heroes site, click ‘Profile’ at the top right of the screen, and find the ‘Redeem Key’ tab. You’ll finally find your brand new Loki, the snow still hissing on his boots, in your heroes roster.

The best thing about all this is that Marvel Heroes is free to play – so there’s really nothing preventing you from creating a new account, excluding the chance of a massive power shortage right now.

Still here? Get to it, then!