That’s the overriding goal of the upcoming Wealth of Nations expansion to the superb Europa Universalis 4. While EU4 already refined its approach to the economy quite a bit, it did not go far enough to re-create the dynamics that gave rise to powerful trade empires like Great Britain, the Dutch, and Venice. Now, with Wealth of Nations, Johansson wants to give them more tools to become powerful, but also steer them into long and bloody trade wars.

Johansson explains that the most recent EU4 expansion, Conquest of Paradise, was “big picture” improvements and changes. Wealth of Nations, by contrast, is a comprehensive series of refinements. By tweaking just about every aspect of trade and diplomacy to promote more conflict and competition for trade, Johansson hopes to leave players shocked at how differently EU4 will play in Wealth of Nations.

The biggest new feature in Wealth of Nations is the national trade company, like the British or Dutch East India Companies. They will, Johansson argues, paint a much more realistic portrait of colonial expansion than EU4 does at the moment.

“Colonial nations …have lots of colonists they send over. They form colonial states. They mind their own business, but what they do and how you manage them can blow up in your face in one form or another,” Johansson says. “But trading in the Indian Ocean was more like taking control over the trade routes in an area rather than just conquering large swaths of territory.”

Enter the East India Companies. Unlike traditional colonies, they don’t contribute taxes and manpower. But if you assign them provinces, they provide huge bonuses to local trade power, giving the mother nation a greater slice of the pie in a given region and more ability to steer trade. They also don’t require the same kind of investment that a regular colony does. Where typical colonies often necessitate full-scale invasion and occupation, trade companies can cherry-pick a bit more and accomplish their mission without pulling their sponsor into a major colonial effort.

While the getting is good

It’s a cool twist on the colonial model, but both Fraser Brown and I admitted we were disappointed that East India Companies can not get out of control the way they did historically. The British East India Company, for instance, basically started conquering India by itself, presenting the British government with a fait accompli. The Company and their mistreated Indian army also sparked the 1857 Mutiny.

We asked Johansson about this, and he understood why we were so fascinated by the idea. But it’s also a simulational element that might be more at home in a game like Victoria 2 than EU4, which is more about giving players control of historical forces. This is a trade-off Paradox Development Studio often face: when does something make for a more interesting model of the world, but a less fun game? With trade companies, they remain tools in the hands of players, and not independent operators.

Still, because they are so dependent on their parent nation, trade companies should give rise to more conflict. A trade-company dominated region is effectively unguarded and open to predation by any other power, meaning that they require active defense and protection from the homeland. That should pull more countries into conflict as they prey on one another’s trade provinces. 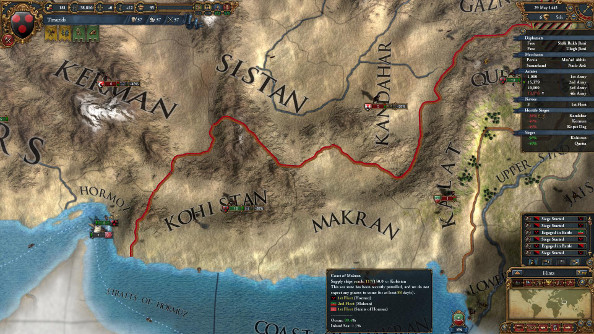 Local trade domination is also more important. “Colonizing by trade empire is going to be more surgical. You take that [province], that one, and that one. …We’re dividing Asia into areas just like we did with colonial regions. So, you’re going to have Indian, Indonesian, and Chinese [trade regions]. If you dominate the trade, or if your trading company dominates trade within a certain area, then that’s going to give you an extra merchant.”

Johansson really wants trading nations to be spending more time fighting and thriving than they did in the base release of EU4. Trade wars, for instance, have been set up to last generations and invite recurring conflict between trade nations.

“We’re going to change around how [the trade dispute] war goal works because now it just expires after the truce expires. [With Wealth of Nations], you’re stuck in this peace deal if you lose the war,” Johansson explained.

So if you pick a trade fight with another power and lose, your peace settlement is much more open-ended. You are stuck transferring trade power to the winner until you eventually say, “enough is enough” and break the deal. But the moment you do that, your adversary gets a new casus belli that lets them renew the war. It could be a very vicious circle.

The one group that might find life gets a little easier in the new expansion is merchant republics. Johansson points out that Venice, which was one of the most powerful Renaissance trade powers, is basically a sitting-duck for Austrian conquest. That’s both somewhat ahistorical, and not really how a merchant republic should be handled within the game. So Wealth of Nations is refining their role.

Taken separately, these may all sound like small changes. But they could have huge ramifications for how Europa Universalis IV works, as the trade, colonization, and militarist strategies become more intertwined. When Wealth of Nations comes out this spring, every great power will ignore the trade game at its peril.