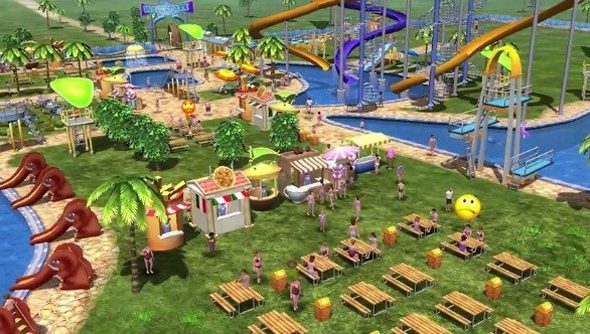 Rollercoaster Tycoon 4 hasn’t happened the way we would’ve liked. Built for mobiles first, it’s going to be retroactively converted into a PC game via Steam Early Access – and we’re not entirely sure the operation’s going to be a success.

In the meantime, lesser-known alternatives have suddenly taken on an optimistic sheen. Step up to the diving board Water Park Tycoon, destined for UK release by the end of the month.

Water Park Tycoon would wear its chief influence on its sleeve if swimsuits had sleeves. Instead, it wears its influence above its head as a gigantic, yellow emoticon.

Christ, those visitor models. Zoom out, zoom out! From on-high, though, things look much more promising – in particular the gentle curvature of that swimming pool, which belies the genre’s tile-based traditions with lessons learned from Photoshop.

Simulation specialists Astragon have developed the game in Germany, where it’s been released for a little while now. They’re also responsible for Farming Simulator, which we’ve covered once or twice on the site.

Water Park Tycoon will be available from “all good retailers and e-tailers” beginning May 23.