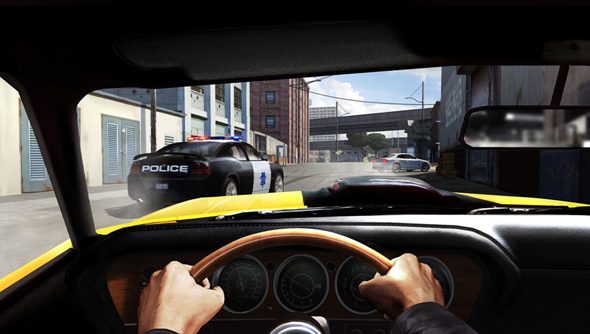 When Ubisoft Reflections finished up on the last Driver game, their owners did a very clever thing: they made them de-facto driving consultants on their roster of new console launch titles. So while the badge on Watch Dogs’ bonnet might feature Ubisoft Montreal, and the hub caps on The Crew will be branded Ivory Tower, it’s Newcastle’s Reflections who’ll provide the crankshafts, shankcrafts, and other essential metaphorical doohickies in both games.

That why if you want to know what sitting on top of a cantering horse made of steel, plastic and tiny explosions will be like in the games of the future, you could do worse than take a look at 2011’s Driver: San Francisco. Here are a few of the common features that’ll likely help define driving in the new generation.

Let me explain Driver: San Francisco’s concept to those unlucky enough not to know it by now. Longtime series protagonist Tanner is badly banged about in the line of his usual duties – frowning, taking corners at 140mph – and falls into a coma. Rather than take advantage of a well-earned rest, however, his subconscious invents a replica San Fran in his mind’s eye. There, Tanner continues his investigation unhindered by sleep or the silly constraints of the human body.

With a tap of the A button, you’re thrown from Tanner’s mortal frame and up into the air to take in a bird’s-eye view of the city. From there, you can possess the driver of any ride that takes your fancy. Why walk when you can teleport?

That’s the first twist; the second is that the passenger seat is rarely empty. In your time with Tanner, you’ll embody the too-devoted boyfriend steering his felonious girlfriend out of the grip of the cops and into the arms of her new love, and the foreign student caroled into street racing by a cousin looking to cover his extortionate college fees.

It’s bonkers, brilliantly so, and anybody capable of coming up with it isn’t going to be hemmed in by mere fiction – not even the po-faced techno-parable that is Watch Dogs. In February, Reflections had a team of 90 working on the game’s interiors and driving missions. 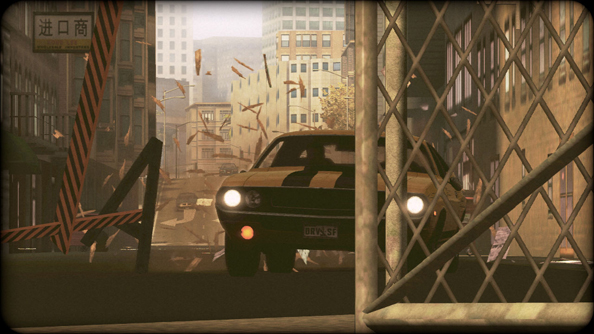 Welcome to Holisti-city, enjoy your stay

On your first ever body-hop, you’re chucked behind the beer belly of the very paramedic taking your own unconscious body to the hospital.

“Eyes on the city, Ray,” chides a nervous colleague as you bring the ambulance to a sudden halt. “Let’s go.”

That’s a motif repeated throughout Driver: San Fran – the same phrase employed by the news anchor who recaps your story every time you reboot the game. Eyes on the city; not the road, or the horizon, but the great web of streets and cable-supported bridges and gaping-maw highways they have in the US. All of it, at once.

That directive could apply to any of Reflections’ games. No sat navs here – you’re required to take a holistic view of your immediate environment, the next turning, and the route by which you might just get you to your destination in one piece. Driver has always encouraged its players to spend as much time hovering above the map as behind the wheel – and never so literally as in San Fran.

As you unravel the game’s plot, you unlock huge new tracts of land, and the greater zoom necessary to look over it. In one mission, you’re literally asked to scope the streets from the skies in a police helicopter search.

Be where you want to be now, say Reflections, in the car you want to be in. Never be jogging back up the road away from your overturned vehicle, waiting for a taxi to spawn.

The Crew is an open-world driving game that cuts out all the boring bits of the US but still takes hours to speed across. It’s gone one better than San Fran, and integrated its own Google Maps – a ‘satellite’ view that amounts to a fast travel shortcut to very fast races. In Driver: San Francisco, you can teleport to a new challenge from the other side of the city; in The Crew you can do the same from New York to Miami. The thinking’s the same; the scale, excitingly, isn’t. 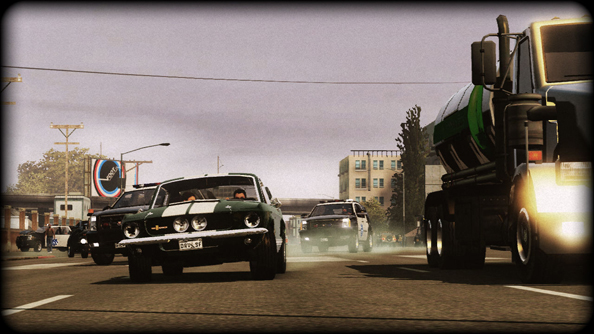 Brakes exist to be slammed, corners aren’t to be slowed for but drifted around at full pelt. Gear sticks are to be ripped out and replaced with sticky notes that read: “We’ve got this. You do your thing, Gosling”.

In Driver: San Fran, you’ll never be thrown off course by a disagreeable lamppost or bus stop, or even a pedestrian on your bonnet – every man, woman and child has the foresight and finesse to leap out of the way in the nick of time, just like the movies.

That’s the thing: ’70s movies. From them, Driver has learned that everything is in service of the chase. Anything that threatens to pull the handbrake on that fantasy has to go.

The same is demonstrably true of The Crew – you’ll drive a 4×4 through the undulating … countryside, but never wind up hissing quietly in a pond you didn’t spot.

Watch Dogs, too, is about execution – hatching a plan on the fly and then pulling it off, using all of the tools on your belt. If part of that plan involves screeching around a bend in a car low enough to limbo, no technical director is going to be allowed to whine in your ear about lift-off oversteer at the wrong moment. 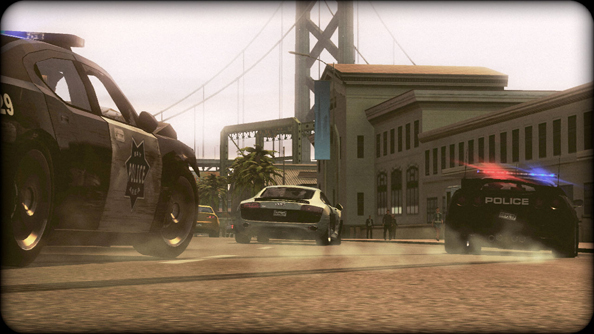 The year after Thief set the template for sneakery, the original Driver defined its lesser-known in-car variant. A vision cone attached to each cop car meant that for every instance of 120mph traffic weaving, there was a hurried u-turn or self-imposed exile to the back streets. In one wing mirror was your mission timer, never slowing for the bends, relentlessly ticking down to zero. In the other, a panda parked at lights which oh god they have to change soon god please. Somewhere in the middle lay a sweet spot of unbearable tension, just waiting to be burst by a siren and a movie magic chase.

The latter day Driver games have seen the system re-tuned for modern sensibilities. Those cones are now simple circles, and once you’ve lost the fuzz in a getaway, nothing short of a nudge to the bumper or a comment about somebody’s mum will draw them back to the scent. But the need to skulk and slip through the alleyways is still there, and can already be seen applied wholesale to Watch Dogs. Don’t expect the complexity or creative bamboozlement of GTA V’s new system, but do expect something not too far down the chain:

The Crew, meanwhile, occasionally features cops as convenient antagonists – and you can bet Ivory Tower have asked the resident experts in ‘70s car chases for their opinion.

If a cop hasn’t written his car off by the end of the day, he’s not doing his job

One can only assume that the San Fran police department has the most macho locker room in the profession: their employees treat their cars as battering rams, hammering you into disorientating spins and eventual submission.

You can nip and tuck yourself between oncoming traffic all you like, but sometimes the only way to escape an adversary in Driver: San Fran is to meet bumper to bumper and ensure their ride is totalled. Every opponent has a health bar, designed to be whittled and hacked at as you push them into oncoming traffic. Similarly, Tanner’s newfound talent for possession means you don’t necessarily ever need to accept second place with good grace: instead, you can swap to an eighteen-wheeler in the other lane and steer it into the would-be winner’s path.

In Watch Dogs, remote-controlled bollards take the place of the eighteen-wheeler, bringing an escaping con’s ride to an unceremonious (and quite noisy) standstill.

And at least one of The Crew’s modes will prove just as brutal. In some of its cooperative battles, four players will each pick their own armoured off-road monster and compete to cause the most damage to a lone humvee:

Just last week, Ubisoft delayed both Watch Dogs and The Crew so as “not to compromise on quality”.

Said Ubi: “As we got closer to release, as all the pieces of the puzzle were falling into place in our last push before completion, it became clear to us that we needed to take the extra time to polish and fine tune every detail so we can deliver a truly memorable and exceptional experience.”

The launches of both games are clearly very important to the French publisher, who never do anything without an eye on its sequel. And it’s Reflections tuning up these two budding series’ that are likely to leave skid marks throughout the next generation. In lieu of a familiar badge on the grill, it’s time we started looking for their mark – the pacey, holistic, crash-happy drive in which everything is second to the chase.