Ted Pollak is a market analyst covering PC gaming at Jon Peddie Research, and his job is to identify trends and make declarative statements about an open platform whose story is not easily decipherable by retail sales reports.

When I call him to talk about how the advent of the Steam Machine will affect the PC market, his first question is, “Well, first, what makes you think it’s a PC?”

“Look, some people have varying definitions,” Pollak says. “But to me, a PC has always been an open platform where the user can choose their distribution sources. Consoles are closed platforms where you are in a closed garden. Steambox, you buy all your software from Valve. There’s a proprietary controller. It fits the definition of a console.”

Pollak’s perspective is both that of a professional analyst and a PC gaming fan. While there are a number of things that excite and interest him about Steam machines, his excitement is tempered by doubts about whether they don’t trade away a little too much of the PC’s functionality and freedom.

“PC, to me, is freedom. I’m sure I’ll be criticized for saying that, for equating Microsoft Windows with ‘freedom’. Some people are not going to cry if they get hurt,” he admits. “But why would someone choose a supercharged high end Steam machine when they can’t run their MS Office, Quickbooks, their Adobe, Autodesk, all this software? Well, with a Steam machine, there’s no way to run that software at this time.”

That’s true, although the contents of the “software” category in Steam indicate a possible direction for the service and, someday, the Steam Machine. But Pollak’s main point is that treating the Steam machine as some kind of living room PC may be a mistake, especially since the primary beneficiaries of such a device would not be the kind of people who invest much in the hobby.

Its most exciting prospects are actually for PC users who want a cheaper and easier alternative to building a gaming rig or buying an off-the-shelf PC.

For that market, and for the hardware manufacturers who supply the builds and components, the Steam machine could be fantastic news, Pollak explains. It’s a market that has started to sag even as mid-range and high-end PC gaming take off. 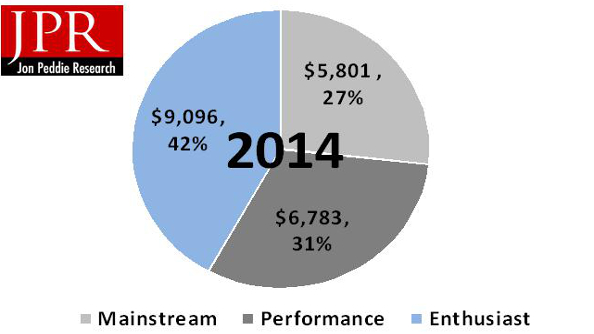 Note: Almost $6 Billion is spent on Mainstream PC Gaming Hardware annually but this sector is under threat. Steam Machines to the rescue? (Source: JPR)

“The mainstream PC gaming market [machines that cost $1000 or less] is in a bit of a challenging environment,” Pollak says. “This is due to two main factors: in the developed markets, the advent of the new console generation will pull some people that were potential gaming PC investments toward consoles. The other factor that is affecting the mainstream PC gaming market is emerging markets’ increased use of ARM-based mobile devices for gaming. When someone has a limited budget, they may choose to invest that in a mobile device. With the advent of MHL and HDMI-out, and Bluetooth game controllers, that’s technology that provides a game console or PC alternative.”

Low-end Steam machines could recover some of that market. “The lower end is more interesting than the higher-end. The high stuff — why would you not want to do all the other stuff you do with PCs? The low end, it’s like ‘Hey, this is a badass alternative to Xbox and Playstation.’ But Valve has a lot of work to do to compete there. Consumers have come to expect that the machine will be doing other things. Including video, social networks, and the like. So the potential for the whole thing as a platform is huge, but is there enough value added to hit the tipping point?”

There’s another issue that Pollak foresees, one that could change how games handle system requirements. “Back to the hardware differentiation: one of the problems with Windows configs, as well as Steam machines, is that when you have different levels of hardware, games perform differently. The system requirement sticker — people don’t know what they have anymore! You ask the average user what CPU they’re running, they have no clue. So some people don’t know what they have, especially when they bought it at Costco or a big box store.”

If Steam machines are to make PC-style gaming more accessible, they’re going to have to find a way to easily decode the kind of experience users can expect with different levels of hardware. Simply listing the recommended hardware is not enough.

Pollak thinks that Steam machines might necessitate some new ways of classifying PC games and hardware, which could be positive for PC gaming overall as game-buying gets easier.

But overall, Steam machines remain a bit of a conundrum for PC gamers. They’re certainly interesting devices, but if you already maintain a decent desktop, a Steam machine is a luxury. For all the excitement over bringing the PC into the living room, Pollak points out that it may not be as important as we think.

“I believe that for PC gamers, part of the attraction is the desktop ergonomic,” he says. “As much as people like to say to PC gamers, hey, grow up, put down your mouse and keyboard, those control inputs have an amazing amount of accuracy and customization. They provide what millions of PC gamers consider to be a superior input technology. …Most PC gamers are PC gamers because they play on the desktop, and they’re not going to move their gaming to a controller based console environment, because they chose PC gaming for a reason.”

Oddly enough, it may just be the current strength of PC gaming that hurts the Steam Machine’s cause among PC gamers. Pollak points out that increasing wealth in Brazil, Russian, India, and China has driven more PC gaming hardware sales, and higher-than-1080p resolutions have pushed consumers around the world into higher-end purchases. To hear Pollak tell it, the Steam machine may arrive just in time to help a faltering mainstream PC gaming hardware sector. That’s great news for PC gaming hardware manufacturers, but it creates a new problem for Valve. The dedicated PC gamers who are most interested in a Steam console may be the least likely to buy one.