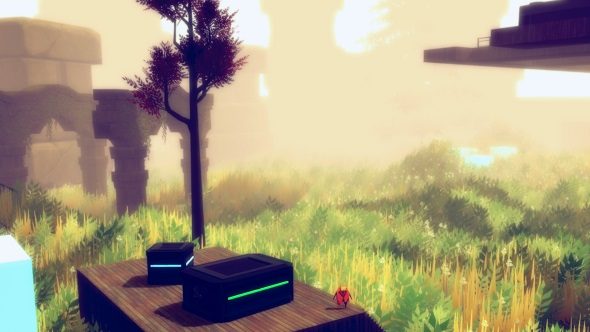 Balancing exploration, platforming and basic survival with protecting what remains of your family, Widower’s Sky looks like one emotional adventure. Casting players as a father whose wife dies during a crash landing on an alien world, it’s your job to get your son and dog home safely while fighting off dangerous wildlife and harsh environmental conditions.

For more journeys to the final frontier, have a look at these PC space games.

While it sounds like a dour expansion for No Man’s Sky, Widower’s Sky is a puzzle platformer which has players attempting to keep their son alive while desperately trying to find some way of getting back home. This involves gathering food and supplies while out in the wilds, with exploring the remnants of towering buildings and broken down factories for a way of getting off world. The father is only armed with a bow, which makes taking on the planet’s giant robotic walkers and hostile animals an often lethal proposition. Your pooch can help deal with some of the smaller creatures but you’ll need to keep it fed, watered and healthy if you wish to get home.

There are portals dotted around the world which you and your family can jump through, but these lead to new environments which come with a whole new set of challenges. While its pastel art style and calming electronic music make it seem like a stress-free adventure, Widower’s Sky is certainly not a relaxing game as your family’s life is constantly at risk. The landscapes are beautiful though, conjuring up a feeling of a world which is enticing to explore, yet full of danger.

It’s certainly a shake-up of the usual survival game formula, as players now have a dependent character that they must look after, rather than being a ravenous lone wolf who simply does what they want. Hopefully, the conceit remains engaging throughout the whole game and players become attached to their virtual son, rather than wanting using him as tiger bait.

Currently planned for release in the early half of 2017, Widower’s Sky is on Steam Greenlight at the moment so feel free to give it a look if the trailer has interested you. You may want a box of tissues with you when you play the full game, it looks like it could be a cryer.