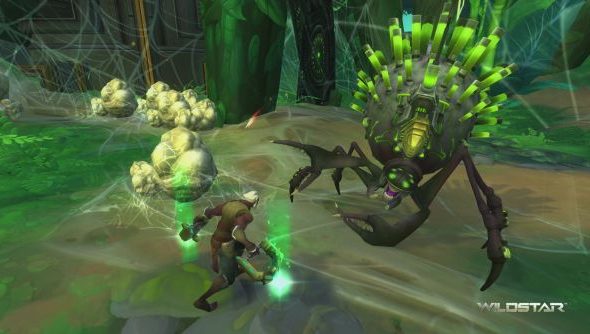 The quirks of videogame terminology mean that while a medic is a fast-moving kamikaze creature who skids across the firing line with defibrillators gripped in both hands, the MMO equivalent healer is simply a chap dressed in green who knows when to start loading the next spell.

A theme has emerged over the last few weeks of class reveals for Carbine’s intended WoW successor. Every one has emerged a capable and highly-mobile solo fighter, and the same is true here.

Carbine say the business of healing in Wildstar is “not about some UI minigame”, but tools like the resonators. Resonators generate “diagnostic fields” that heal allies in the area of effect while “devastating” healthy enemies. Similarly, medics can employ ‘stations’ – fixed zones of damage of healing they can strategically plant around the battlefield.

Explodable probes and medium armour make sure the medic can approach enemies themselves when need be. Is that the way you like to heal, or were you hoping for something a tad more trad?

A lot less is known about the Engineer at this stage. But they’ve been announced, he/she exists, and we’re hoping to hear more on that front in the coming days.