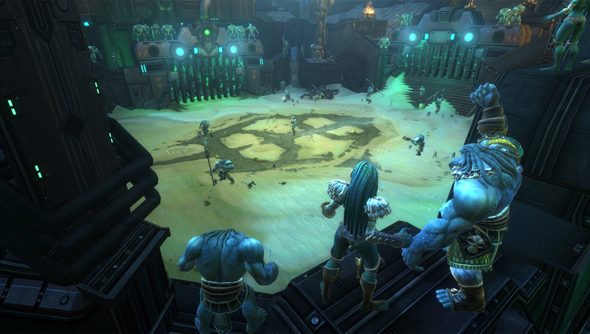 WildStar was in development for nearly an entire decade – its team built around a group of early WoW refugees determined to draw on its successes and expunge its mistakes. But it hadn’t been out a year before Carbine’s free-to-play switch was announced, and the MMO’s subscription denounced as the “antithesis of inclusivity”.

Carbine are going to work out the finer details alongside players old and new, in a closed beta with a grand opening today. It transpires they’ve seized the opportunity for a bold rework of not just WildStar’s payment systems, but practically every area in the game.

Throughout our Gamescom chat, Carbine lead designer Mike Barr makes graphs with his hands. When he talks about WildStar at launch, he draws cliff-faces in the air. When the subject changes to the redesign, he plots gentle inclines and calming waves.

This consciously hardcore MMO has turned newly accessible. But have Carbine preserved its spirit in the process? 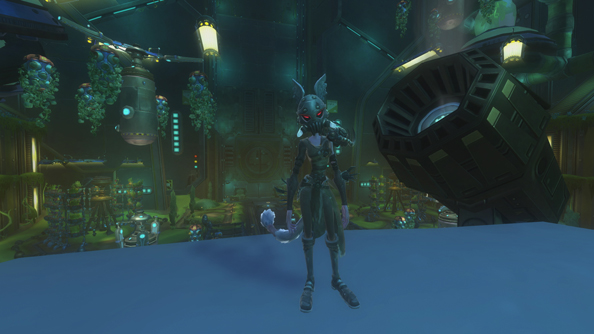 Before WildStar shipped, Carbine collated close to a million beta sign-ups. But launch was a different story. Despite an Eve-like credit system that promised free game time for dedicated players, subscriptions were subpar.

“I think I’d be lying if I said they were exactly what I expected,” says Barr. “We did great out the door, but if a game is going to cost you £60 upfront before you even know if it’s worth anything, and then turn around and cost you $15 a month when you haven’t even decided if you like it or not – that’s a lot of money to put out when there are so many free-to-play games that you can just try out.

The trick is in guiding those MMO window shoppers over the threshold. Barr thinks he knows how.

“We knew we had to do a lot of things to make the game more accessible to a broader market,” he explains. 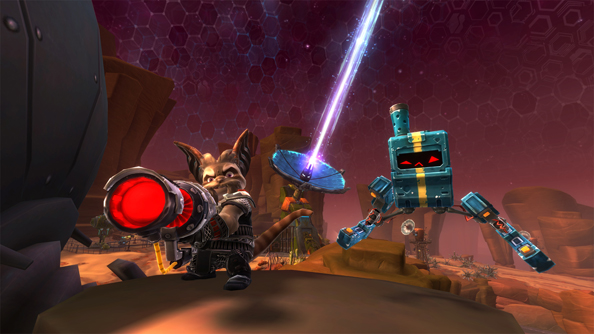 The studio reexamined every stretch of the game, from levels 1 to 50. It wasn’t pretty: their heat maps showed that some areas were total player bloodbaths.

“Wow, people are dying all the time in this area,” they realised. “And then they’re not coming back – it’s just too much.”

Enemies with pistols, it turned out, had unusually long telegraphs – the cones of attack that distinguish WildStar’s combat from that of other MMOs. Those cones were leading players to dodge and dodge again, eventually tumbling into nests of monsters that finished them off.

“You as a player, who might not be used to it at level eight, are just like, ‘Oh, forget this game. It’s too hard’,” says Barr. “We never intended it that way.”

In that particular case, Carbine cut the number of pistoleers to make sure players weren’t constantly weaving, and compensated with a faster respawn time. 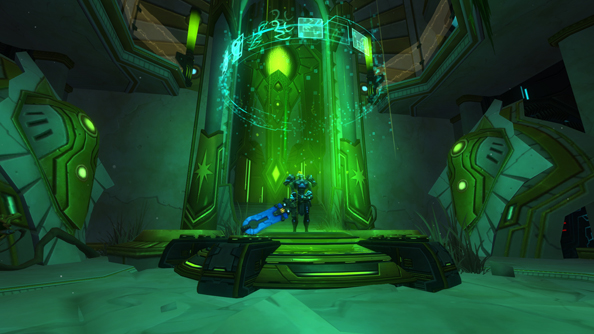 “We had to do that really for every playspace in the entire game,” recalls Barr.

Dungeons have been a problem too – even though “everyone loves them”.

“Everyone said, ‘Oh man, these are the best dungeons ever’,” Barr remembers. “But the problem was that it was just so steep, the incline when you got in there. You have a lot of action mechanics that other games don’t have.”

The solution has been to introduce a level six shiphand – a short quest playable alone or with a handful of friends – to get players moving in the right ways earlier, and a level ten training dungeon to teach them how to dodge and interrupt (“Everything you’d ever need to know to succeed”).

Of the two existing level 20 dungeons, one has been nudged up to level 25 – helping to realise that pleasant curve Barr is so fond of drawing. And Carbine are now rewarding players with more gear that will help them perform better in dungeons. 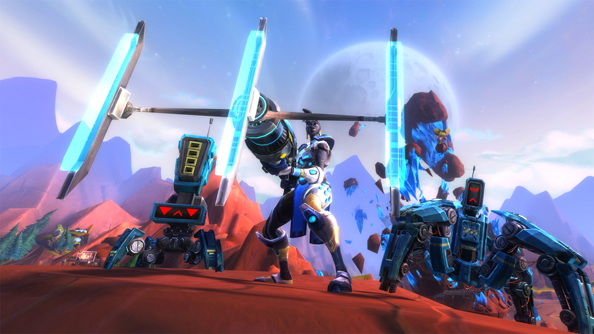 The same approach has guided their hand in building new encounters. Beyond a vertiginous new PvP arena, Cryo-Plex, there’s the Alpha Sanctum – a new solo instance. Carbine originally designed solo instances to free MMO storytelling from group dungeons, but accidentally introduced a new barrier – they only began at level 35. With the redesign, they’ve redistributed solo encounters evenly throughout the levels, slipping in a few more at cap, to provide a “slow roll” of story.

Then there’s the tutorial, which now comes in novice, intermediate and expert flavours. Intermediate used to take 45 minutes, and had you spend the first 20 outside of combat; it’s now a third of the length, and you’re scrapping in a matter of seconds.

Carbine have always offered a lot in the way of starting class advice, but outside the WildStar client – via instructional YouTube videos. Now those clips have been folded into the game proper, to help players grasp the implications of their first choices.

“A lot of people didn’t understand, ‘Hey, what does it mean that I’m an Explorer?’”, says product director Mike Donatelli. “And they’d get in the game and say, ‘That wasn’t really what I wanted’. So we’re giving them a little heads-up.”

Elsewhere Carbine have re-itemised and re-statted the entire game to render upgrade paths clearer – “It’s better for everyone involved” – and eased the moment-to-moment business of playing WildStar. 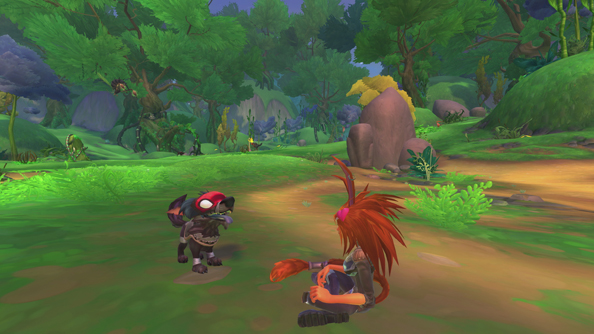 They decided, for instance, that there was no reason why players shouldn’t be able to sprint indefinitely while not in combat – or for them to have to turn to modders for a junk button. A new navpoint system seems most strikingly useful, since one of WildStar’s biggest draws is its world – you can now slap down a point on the map, and the game will generate a big arrow to direct you there.

“These are all things that our current players were asking us for,” notes Barr. “And we’re pretty much sure if we do this it’s going to be a better experience for new and casual players.”

It sounds like unequivocal improvement. But how did WildStar launch in such a punishing state last year?

“I kind of understand how it came up,” muses Barr. “Because we’ve been playing the game for so long in developing it, with dodge and telegraphs, we’re pretty good at that. So we were always looking at it going, ‘Oh, it’ll be fine, players will be fine, they’ll get it,’ and not realising.”

WildStar was built on the promise of hardcore MMO encounters – intended as a salve for players upset that the genre was stepping away from raid culture. There’s a worry inherent in its move towards free-to-play accessibility – that its early WoW ethos might be muddled in the process. 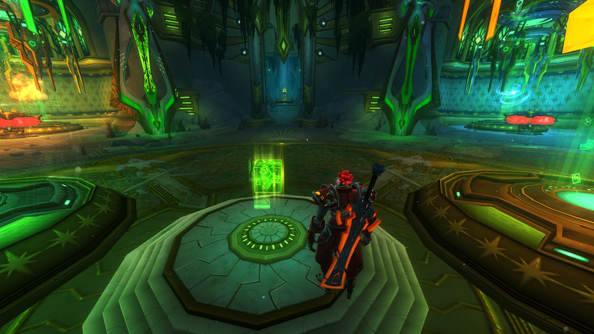 “What we’ve tried to do I think at every turn is preserve the challenge,” nods Barr. “It’s just that we have to keep in mind that not everybody that is going to come to the game is going to have that time to commit [to 40-man raids]. Who has the time?”

The idea is to continue championing the complexity of WildStar combat – but to ease players in, and make sure they have a much better understanding of its peculiarities.

“I think we made all the right moves,” says Barr. “And now this free-to-play transition and this relaunch allows us to really say, ‘It’s free, there’s no reason not to try it’. Try it and see if we’ve done everything I think we have.”