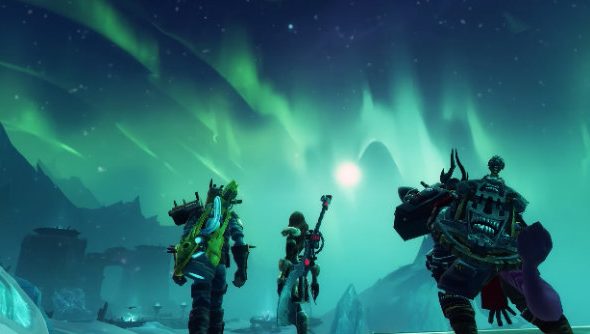 Why not look at our list of PC’s best MMORPGs.

Following the tale of Drusera and the Entity, Destination Arcterra takes you to an icy new continent filled with wooly beasts, skeletons and frigid giants, all illuminated by a beautiful aurora hanging in the twilight sky.

In this land, factions will be able to battle it out in a competition to collect keys from the zone’s bosses. Every 24 hours, the faction with the most keys will get access to a dungeon below the tundra.

Arcterra’s other main draw is the long-awaited second chapter to WildStar’s main storyline, Vault of the Archon, which is the ultimate goal of the Caretaker’s expedition into the frozen wasteland of Arcterra. Players need to work together to uncover its location, and a future update will lay its secrets bare.

If you want to look at the massive list of fixes and additions to Wildstar’s latest update, which is live now, head over to the Wildstar forums.

With almost half of their workforce recently laid off, hopefully Destination Arcterra gives Carbine Studios a boost. This update was supposed to land alongside Wildstar’s Steam launch, but there’s still no word on that as yet. Hopefully that will bolster Wildstar’s player count when it finally does.