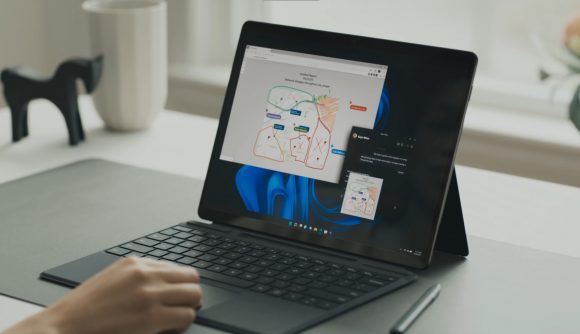 In the four months since Windows 11’s release, the OS has received multiple bug fixes and features. However, there’s still plenty of work to be done in polishing it up to run its best, and it looks like Microsoft is due to address a long-standing issue with Windows’ taskbar.

While exploring a pre-release build of Windows 11 Pro, Twitter user thebookisclosed spotted that Microsoft is changing how the taskbar handles program overflow. Currently, when more applications are open than the taskbar has room for, they are relegated to a single slot with no means of easily selecting them individually. Now, users will be able to cycle through everything in the overflow via a clickable flyout (pictured below.)

This will undoubtedly assist casual and power users alike in managing multiple apps, particularly on lower-resolution displays that leave less room for the taskbar However, we’d sooner encourage running as few programs as possible to maximise your system’s performance.

Welcome as new features are, there’s no update on several performance issues that continue to plague Windows 11. AMD and Microsoft are yet to provide a timeline for when the stuttering issues on Ryzen processors caused by TPM requirements will be addressed. Reports of these problems date back to July 2021, and it’s disappointing to see this be continually neglected.

An improved taskbar app list overflow experience is in the works.
Many people have complained about the rudimentary approach of reserving one slot for apps that don't fit and changing its contents as you flip between them.
With the new overflow flyout all apps are in reach again. pic.twitter.com/NMehp2Pl7t

As more Steam users continue to upgrade their Windows 10 systems, we pray that Microsoft doesn’t leave Ryzen gaming PCs waiting for too long. Here’s hoping that Zen 4 CPUs don’t suffer from the same issues, when they arrive later this year.