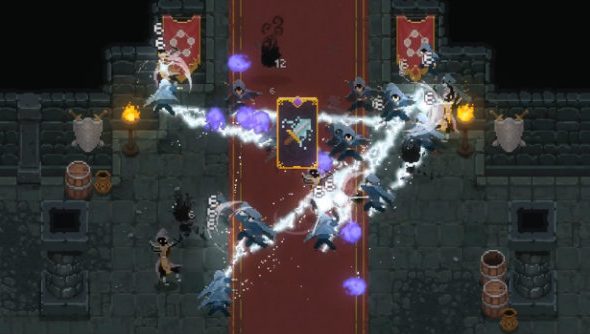 It might be worth digging out your magical mirror so you can keep an eye on this one. Wizard of Legend is a 2D dungeon crawler where you play, you guessed it, a wizard – he’s probably a legend too.

For more small studio goodness, check out our list of PC’sbest indie games.

Wizard of Legend reimagines the magic user. Instead of being a beardy old dude with a staff, you’re a hooded badass who’s faster than Bruce Lee and more proficient in the magic arts than Gandalf.

Instead of mumbling incantations, these wizards can throw fire from their fists in deadly combos, freely switching up the elements and using different spells to attack, counter, dodge and debuff. It looks lovely in motion.

There’s a standalone demo you can try on theWizard of Legend Kickstarterpage, but the full game (if it’s funded) will feature a single-player, co-op and even a competitive mode where two warlocks can go spell-to-spell.

The game’s programmer and artist, Bundy Kim, told me “the game’s combat takes a lot of influence from fighting games such as Street Fighter and also includes aspects of modern action games such as Devil May Cry”, which is very exciting.

Watching the trailer, those influences certainly seem appropriate. See it for yourself below:

There are also a bunch of exciting gifs on that Kickstarter page, so do head over, even if you’re not planning on backing it.