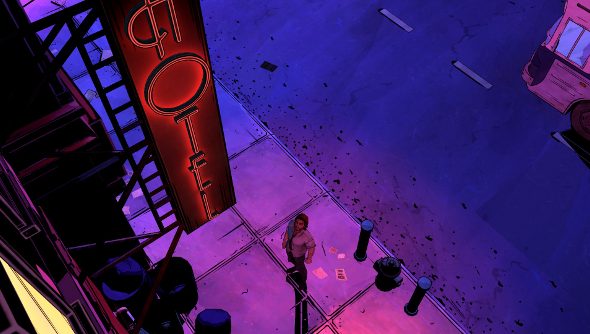 Four months is a long time to wait for a two hour long episodic adventure, but when I stepped across the threshold and into Fabletown, New York, everything came back to me instantly. Its distinct tone, Bigby Wolf’s gravelly voice as he interrogates people, the ever-present threat and promise of horrible violence – it’s hard to forget.

And so is the guilt. Like The Walking Dead, The Wolf Among Us delights in nudging the player into doing regrettable things, but in this Fables spin-off, you’re playing a monster who’s filled with centuries of guilt. It weighs on him, and it’s starting to weigh on me.

So Episode 2, Smoke and Mirrors begins with me wanting to be a better person. No dismemberment, no making children cry. I couldn’t have picked a worse possible time.

Like a backwards version of a police procedural, Smoke and Mirrors starts in a police station, a dangerous monster (that’s you) being questioned by the police, and it ends at a gruesome crime scene. Despite its pulpy, noir detective appearance, The Wolf Among Us is only superficially about a detective – more specifically a sheriff – chasing a serial killer. 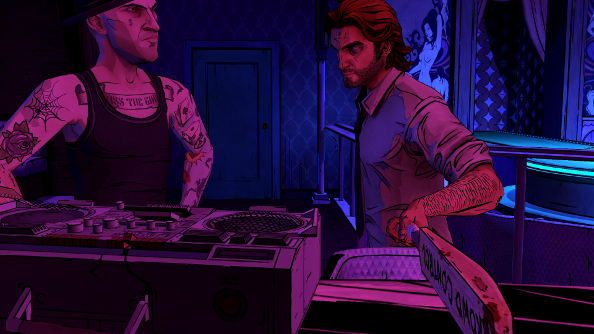 Bigby’s one of the biggest, baddest monsters in Fabletown, and this reputation precedes him everywhere he goes, casting a shadow over almost every interaction. This is problematic given the fact that Smoke and Mirrors is a whirlwind tour of some of the roughest parts of Fabletown, with Bigby trying to squeeze information out of a whole heap of people who aren’t very fond of him.

It’s a tightly paced episode, shining a light on a plethora of fairytale characters turned into broken messes by the mundane world they now inhabit like club owner and pimp, Georgie Porgie or the trouble-making Jack Horner. Bigby jumps from seedy dive bars to seedier hotels, and the game never lets a location get stale or exploration take too long. There’s no sense of being rushed, though, as the high stakes of the investigation naturally propel the story forward.

Through it all, Bigby clenches his fists and tightens his jaw. He’s an angry, angry man and it’s so easy to just unleash his anger on some unsuspecting unfortunate. But I was trying to be a nice guy. Telltale’s recent adventure games consistently make me change my play-style, just because I feel bad.

But damn is it hard. Within minutes, Smoke and Mirrors lets you torture a fellow fable. There’s a cigar, a big bottle and, of course, Bigby’s very effective fists. I was tempted to lose my cool twice. The first was almost immediately, when my instincts almost took over, trained by countless games that revel in violence. The second was because I was getting frustrated. He wasn’t talking, I was in a rush and I wanted some revenge. 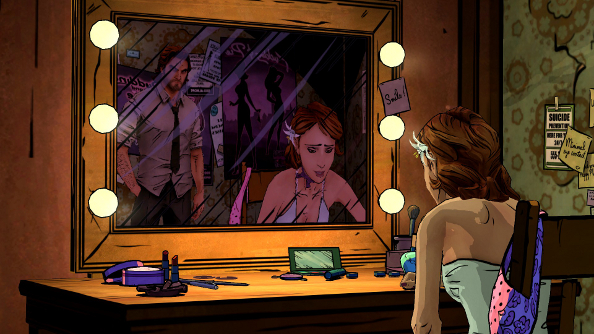 I managed to play nice, but it was a trial. It set the tone of the episode for me. I was fighting Bigby’s instincts as well as my, to be frank, desire to see some flashy, violent action.

My moderation did not go unnoticed. Almost every conversation with a fellow fable begins with a flinch. Bigby is feared, and my actions in the previous episode certainly give the people of Fabletown more to fear if the tank was getting empty. But by easing back on the threats and growling, people started to open up. The investigation was progressing. It felt good.

This is not allowed. Want to feel good? Don’t play a game about dead prostitutes, serial killers or fairytale fetishes.

The Wolf Among Us is as much about Bigby’s inner struggle with his wolf as it is about a series of murders, and his resolve wouldn’t exactly be tested unless he was forced into a violent confrontation. So it happened. Walls were smashed, eyes were gouged out, angry chaps shouted at each other. It was a gloriously over-the-top bit of savagery, exceedingly well choreographed, and it made me feel like a bastard afterwards. As expected. 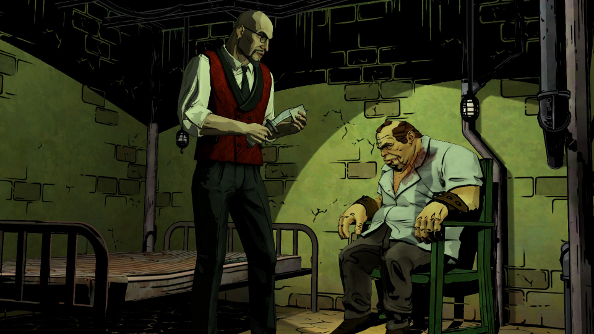 But that fight gives way to one of the more awkward scenes in the game: the site of a murder, a ritualistic killing spurred on by a sick fascination with a specific fairytale. That’s not what made it awkward though. Putting the pieces together, connecting the evidence in the room is a simple affair. Click on some objects, choose the right dialogue option. Done. But there’s so much repetition. Beauty, who has accompanied you, repeats, in agonising detail, exactly what you’ve discovered, after you’ve already said the same thing.

Maybe Beauty is just annoying. Actually, that’s definitely part of it. But I also think that as Telltale has moved away from traditional point-and-click adventure games, they don’t want to tax anyone’s mind too much and put them off continuing the story with tough puzzles. Or even simple puzzles, really.

That would have been my only complaint about the game, which never misses a beat and manages to be just as exciting and compelling as its predecessor, but technical difficulties somewhat hampered the adventure. A character says the wrong lines, some audio doesn’t play, the game locked up near the end; not major, game-breaking bugs, but annoying nonetheless.

Despite a few missteps, Smoke and Mirrors is an excellent follow-up to Faith. It’s a twisted journey through Fabletown’s dirty, neon underbelly exploring the darker side of glamour magic and the exploitation of fables. It ends somewhat abruptly, with a terrible revelation, making the wait for the third episode already agonising.