There are bits of Wolfenstein II that I can hardly believe exist. I have come to terms with the alt-history, the Nazi super-tech, the weird juxtaposition of hyper violence, melancholy, and humour that now defines the series. But the sequence of reveals, shocks, and cinematic moments that make up this thrill ride are exquisite, and nigh impossible. They couldn’t happen in any other medium, they wouldn’t fit any other story, and it’s a miracle that MachineGames ever got the chance.

Thank whatever you believe in that they did. Wolfenstein II: The New Colossus is a masterpiece.

Don’t allow anyone to spoil it for you. The marketing machine has already shown far too much of what is a tightly packed ten-hour campaign. It revs the engines for a while, letting you get used to the blood and gore, the sadness and despair. And then, around halfway through, it lets loose and becomes one of the sweetest, funniest, and yes, one of the best single-player stories of all time, all while maintaining a solid FPS grounding.

If there is anywhere that Wolfenstein II fails it is in those basics. There are times when combat is frustrating, death coming too swiftly. You are not an invulnerable killing machine, and the tools at your disposal do not always feel powerful enough to stem the tide of swastikas and black-red uniforms. Stealth is nowhere near as powerful as it was in the first game, with enemies feeling a little too eagle-eyed and too quick to 180 and spot you this time around. If you play it solely as a blaster, you’re going to have more fun with it than I initially did. 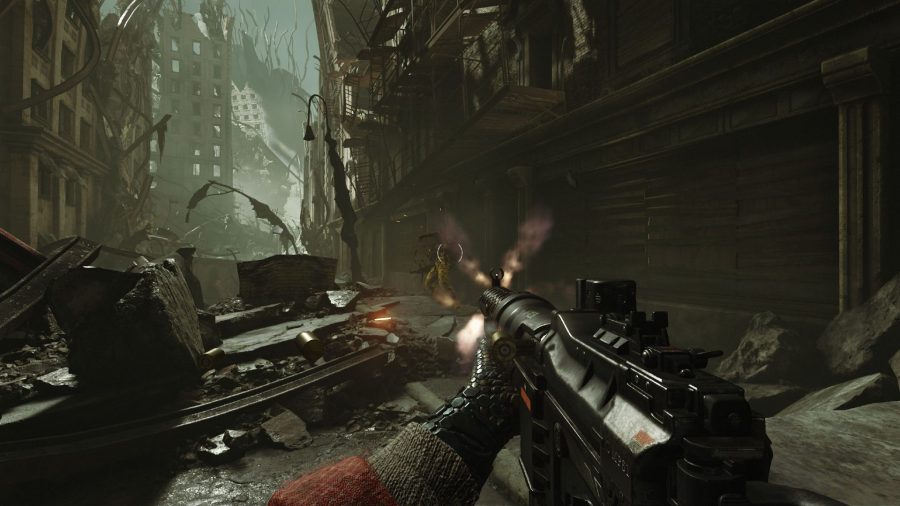 Once you’ve been spotted everything is balanced around you having the first shot, taking the initiative, charging in guns blazing and killing enemies before they have a chance to react. Give them one and they will shred you. More than once a fantastically written, beautifully constructed set-piece was hampered by one too many respawns, one too many returns to the loading screen. All the weapon upgrades and special perks and powers in the game will not stop you dying if you let yourself be outflanked, and that was on the third of seven difficulty settings. Some masochist somewhere is going to have a very good time indeed.

Forget whatever element of The New Order you think the developers couldn't outdo, because they have

Other pressing niggles include the weapon wheel, which simply is not pleasant to use with mouse and keyboard, and a middling autosave system that cannot even be excused by the existence of quick save. In a game with worse characters, sub-par guns, and a lesser soundtrack, this would maybe bring me to the point of disliking it. In combination with other elements not being up to snuff, these small but gnawing issues could be a downer – due to the skill in execution displayed in every other part of this sequel, I can only call it a total triumph.

Its many moving parts are held together by the most brilliant direction in a game I have ever played. Beyond emulating a movie, it uses the placement of cameras and composition of shots in cutscenes in ways only a videogame can – simply, in real life, there are places a camera will not fit. In and out of cinematics, the animation and voice acting is sublime, while the music is Mick Gordon’s finest work, automatically making it one of the best soundtracks of all time. By putting him in charge, combat is immediately and massively improved. I’ll be working with this in my ears for at least a week. 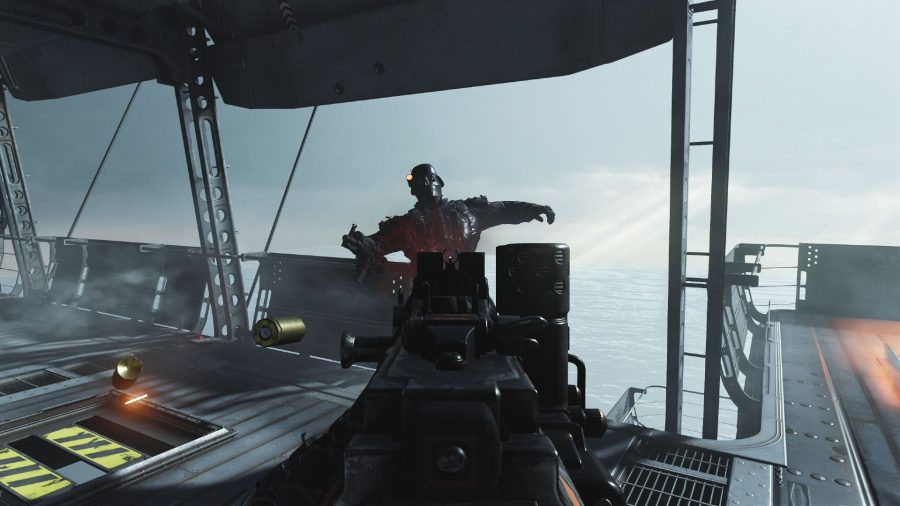 Forget whatever element of The New Order you think the developers couldn’t outdo, because they have. They one-up Nazis on the moon. They make a stuck-out tongue of original villain Deathshead’s cruelty. They cause mid-game Nazi zombies to look as predictable and tired as the ‘it was all a dream’ trope. They dance the line of their dramatic tonal shifts, discordantly stringing together exploding brains and hatchets to the face with B.J.’s struggles with fatherhood, the realities of a nation with the Klan in power, and the simple problems of having a shitty family.

The New Colossus doesn’t pull a single punch. In language, graphic violence, sex, even the descriptions of events that you do not directly see, it is raw and honest, and likely to turn a stomach or two. It’s a game about racism, hatred, and cruelty, from Blasko’s father right down to its horrendous 1960s world. And all that sits right alongside gruesome headshots and power stomps, brilliant explosions, and tides of fire brought by a highly satisfying array of ballistics.

Most impressively, Wolfenstein II is determined to be funny through all of that. It never quite wipes away the darkness at the edges, never takes you wholly out of that world where oppression rules and hope is fading, nor is a joke clumsily dropped in without taste. Set ups take time, with seeds planted in some of the most horrifying scenes used as callbacks later on. The absurdity of the whole situation is always the bedrock, the same thing that lets it be so violent, so cruel, also allowing for hilarious moments – sometimes, even, when those two overlap. 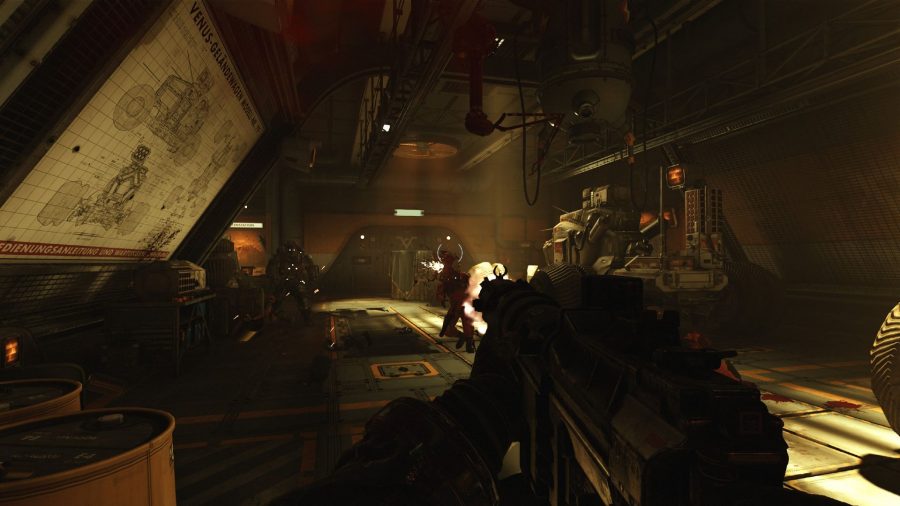 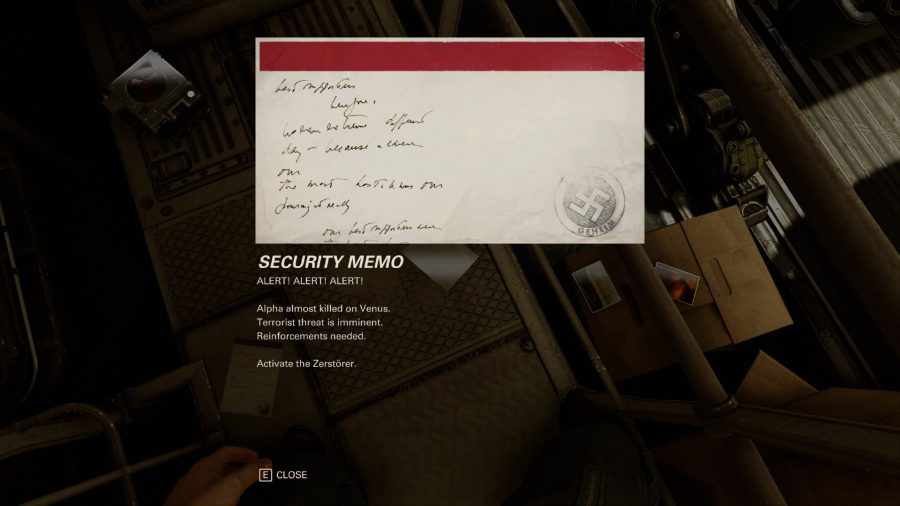 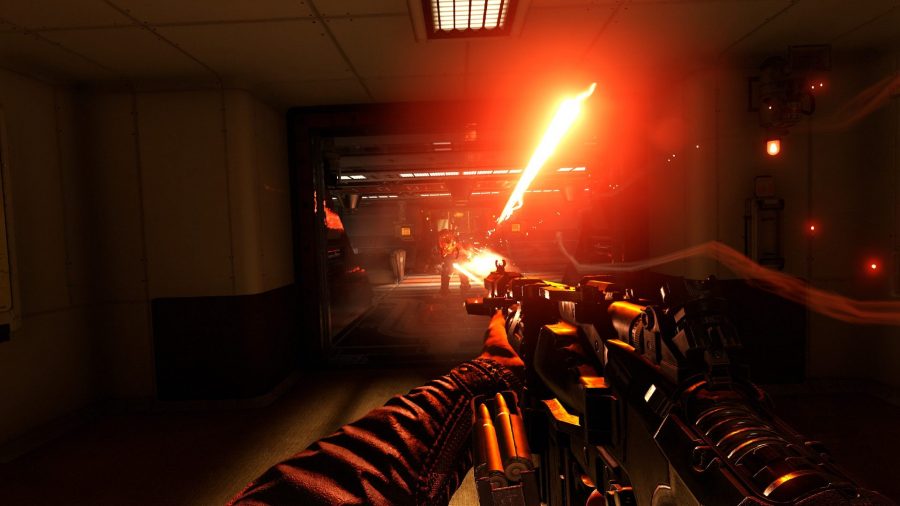 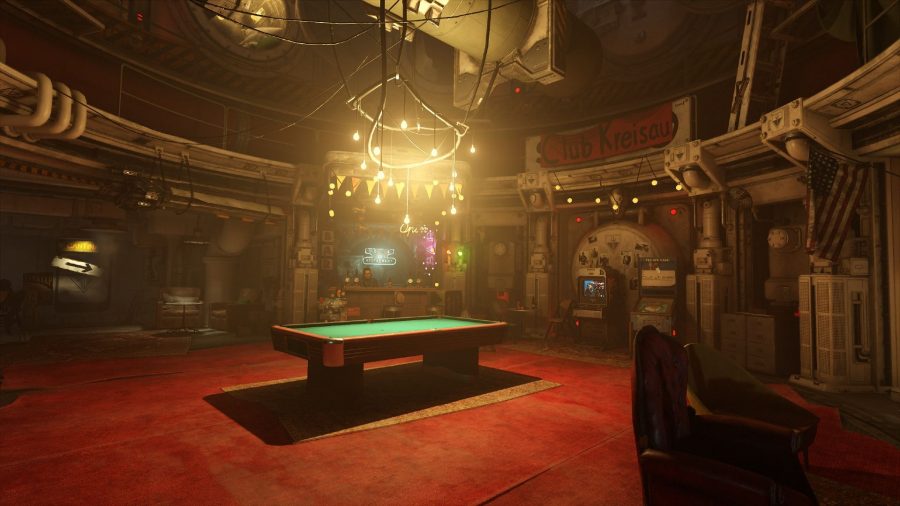 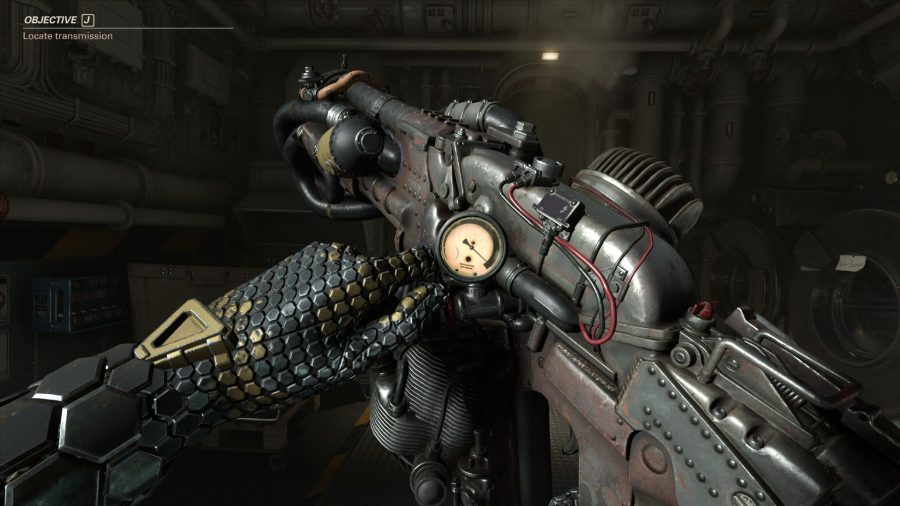 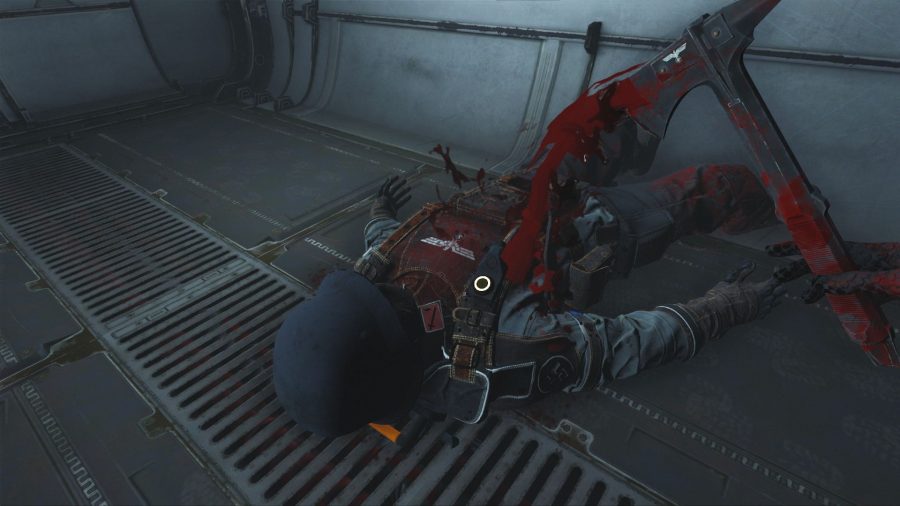 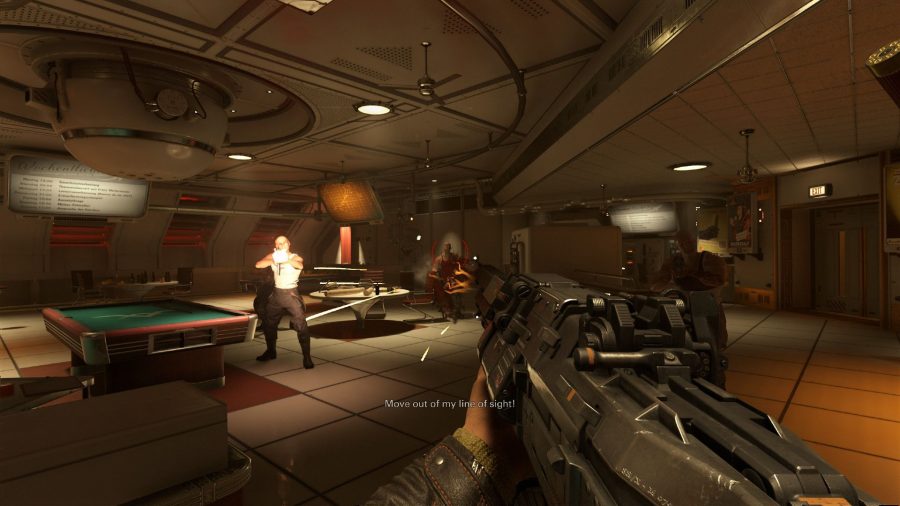 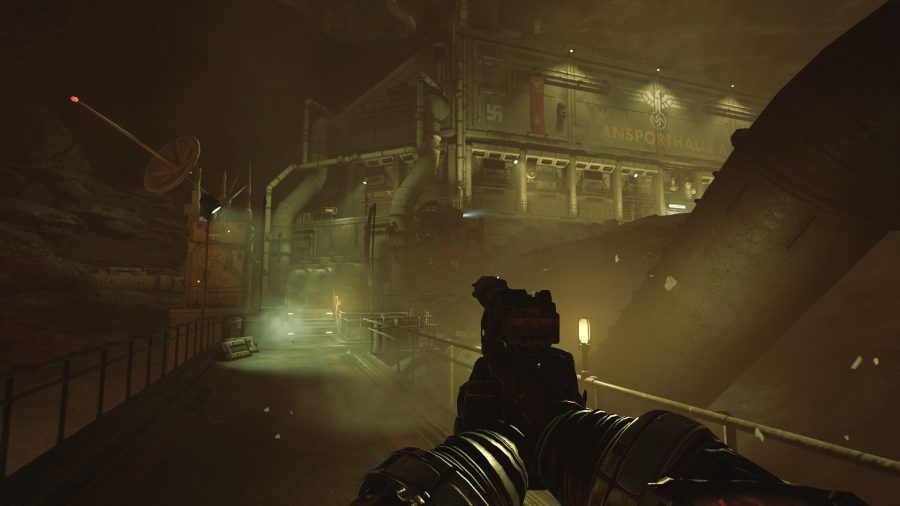 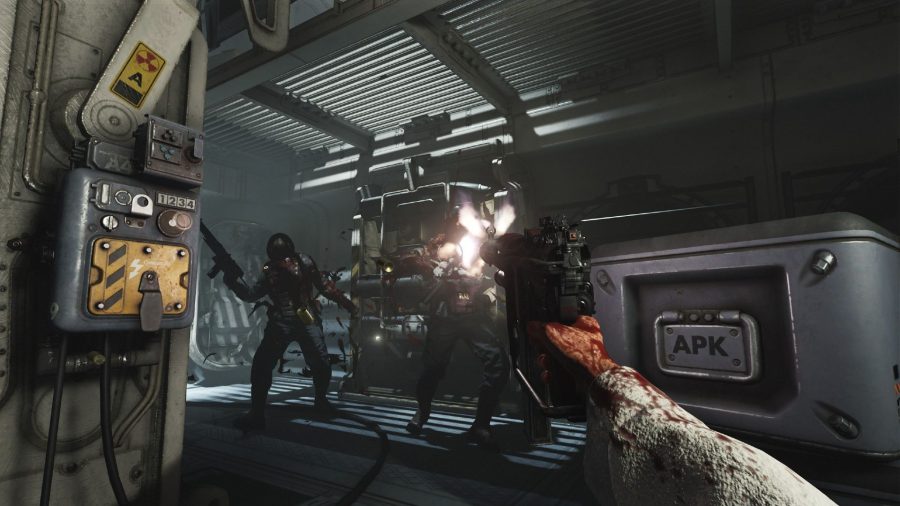 That discordance is the heart of the Wolfenstein series and the sequel makes it blazingly clear. William ‘B.J.’ Blazkowicz runs at the speed of sound. William ‘B.J.’ Blazkowicz kills a hundred Nazis an hour. William ‘B.J.’ Blazkowicz is a dying old man wearing the skin and supersuit of a ‘90s comic book hero – depressing monologues tucked away inside an edgy, violent exterior. All while playing the straight man to all those jokes, bookending each killing spree with quiet moments of introspection, including actual flashbacks to his youth – one of the stronger storylines in a game that has a mighty host of them.

The clever incongruity continues with the enemies. A clear effort has been made to humanise Nazis, to build lives on the foundation of hate they are famous for. Soldiers will have idle conversations, trying to understand why anyone would rise up against them, or talking about their holiday plans. The many (many) scattered collectibles, which make what is a beautiful game richer with backstory and detail, often focus on the personal lives of the troopers, scientists, and commanders you just beheaded, burned, bludgeoned, or otherwise put to pasture. The message is that the horrors of this world are committed by people – men, not gods or aliens or interdimensional baddies – and they deserve to die.

Where you stand on that issue, particularly in the current political climate of Hellworld 2017, I cannot predict. For me, it is a good message for the modern era, and a direct factor in increasing my enjoyment of the game. The plot reinforces this throughout, only subverting it in the most specific cases where it can surprise, entertain, and revolt. It’s a work of art. 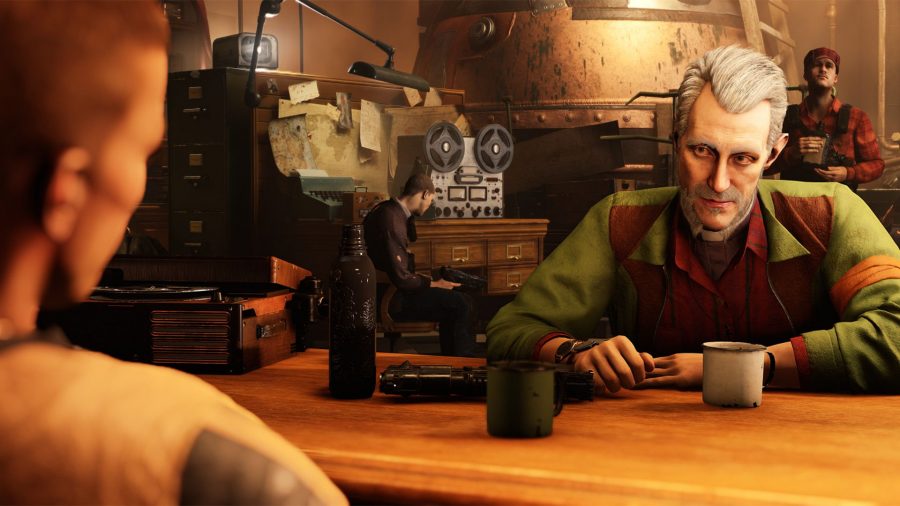 Wolfenstein II is a collection of perfected game elements built on an only slightly unsteady base. Don’t let that worry you, but maybe turn the difficulty down if you are having a hard time.

There is more that I have not fully explored, a series of side missions that reuse maps in odd ways, showing MachineGames have the intelligence to not overfill their main offering, but to give you a new perspective on it should replayability be a key selling point for you. I am also yet to entertain a whole other timeline, which changes the plot, further examines important characters, and hands you a new gun. It’s another flavour that should complement what is already an incredible meal.