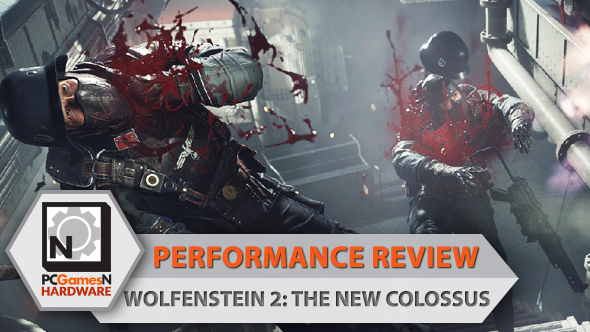 It is the best shooter of the year, but what is Wolfenstein II: The New Colossus’s PC performance like? Built on the current iteration of the notoriously difficult id Tech engine, it is easy to assume that a game so graphically intense is resource hungry and prone to slow down, crashes, and other system problems. We would not want you to leave things like these to chance, which is why we’ve put together this Wolfenstein II: The New Colossus PC performance review. 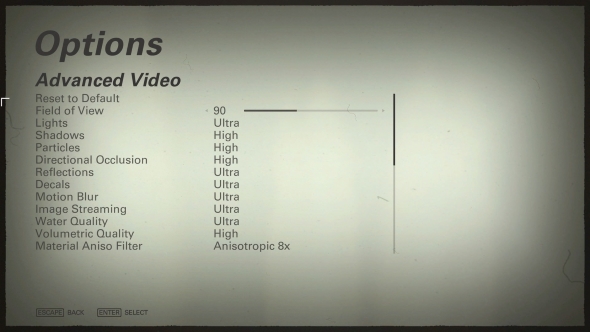 Split over two menus, Wolfenstein II’s video options cover a vast plethora of elements. In the basic menu there are options for overall quality presets, resolution, anti-aliasing tech, v-sync, motion blur, and a colorblind mode. Head into the advanced menu and you will find 27 different options, from the usual suspects of lights, shadows, particles, reflections, all the way through to things like lightmap aniso filter, GPU culling, deferred rendering, and decal filtering. This is certainly a graphics menu for the technology connoisseur.

With so many options, you will likely want to opt for one of the overall presets, but even they are more complicated than your average game. There are the standard low, medium, high, and ultra presets, but on top of those there are Uber and Mein Leben! options. As their order suggests, these only serve to make Wolfenstein even prettier.

The New Colossus is built on the Vulkan API, rather than DirectX, which will produce a few issues for players who make use of third-party overlays. FRAPS won’t work, so you’ll need to use software like OCAT to take benchmarks. However, during my testing process, I found OCAT caused Wolfenstein to display nothing but a blank screen. I also had problems with both Nvida GeForce Shadowplay and AMD’s ReLive; neither could display their overlays in-game, making their screenshot and frame counter functions unusable. Thankfully Wolfenstein has an excellent in-game performance metric display, but unlike FRAPS and OCAT it cannot create data reports.

For our graphics analysis we compare screenshots taken on the four standard presets of ultra, high, medium, and low. Wolfenstein II also has Uber and Mein Leben! presets, offering a little extra control without diving into the granular details. There’s not a huge difference, but we have analysed the highest setting alongside the standard four, too. As with many modern games, you will need to restart the game if you make graphical changes. 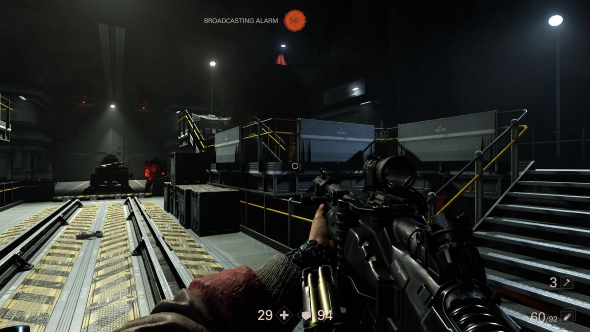 Unsurprisingly, Wolfenstein II looks fantastic on its highest settings. The dieselpunk aesthetic appears suitably grimy and functional, with detailed checker-plate floor panels and worn hazard stripe paintwork. The Mein Leben! preset’s strongest assets are its shadows, which are perfectly cast by every object in the world. You can see them in the spaces below the gantries on both the right and left, most notably under the large rectangular panels. These are not present in such detail on lower settings.

You would think that a shooter that looks this great would be taxing, but Wolfenstein II has a pleasant surprise up its sleeve. With every last bell and whistle turned on, our modest test rig achieved an average of 93fps. Even at its busiest moments, the rate only dropped as far as 62fps. That is seriously impressive. 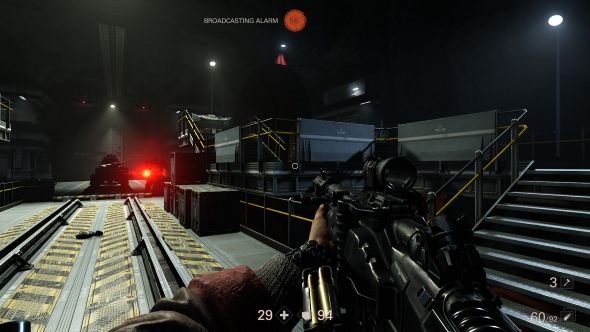 There is very little difference between the Mein Leben! and ultra presets. All textures remain intact, with the overall scene looking almost as fantastic as the highest settings. As noted earlier, it is all in the shadows. With a lower ambient occlusion setting, very specific shading areas lose their shadows. Check out the squares on the gantry to the left of the scene, the areas below the rectangular steel panels on the hand rails, or the steps on the right; all have reduced shadow detail and lighter shading when compared to Mein Leben!

Sacrificing those shadows will result in a fair performance jump, with an average of 108fps on a GTX 1060. With a minimum of 79fps, this preset will guarantee a super-smooth experience even when the going gets tough. 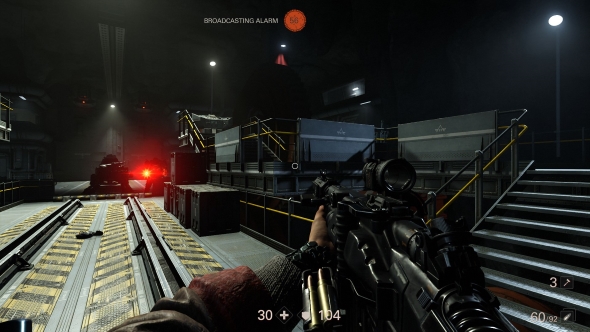 Once again, the reduction in quality only results in a lighting change. Textures and modelwork look just as great, but many non-essential shadows are significantly toned down or removed entirely. The shadows below the steel panels has disappeared, while the shadow cast on the right-most panel is blurrier and lighter. Far distance shadows are also reduced; there’s little shadow detail on the console at the top of the stairs.

High settings produce an average frame rate of 108fps, with a low of 79fps, demonstrating a notable performance jump in exchange for those shadows. Considering the performance on ultra, it makes little sense scaling down to high settings, but this is good news for anyone with older hardware looking to squeeze a few extra frames. 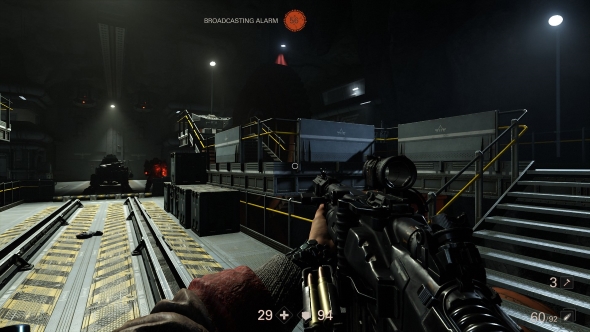 At medium, pretty much all the ambient occlusion shading has been removed. All the metal framework on the gantries is lit with very flat lighting, and there’s no detailed shading on the rail system on the floor. The overall effect is a far less atmospheric image. There is also no depth of field effect; the bottom edge of the rifle and the areas around BJ’s wrists looks sharper than before thanks the the lack of soft-focus that DOF provides. This in turn highlights a very slight amount of aliasing on the edges of the suit’s hexagonal scales.

These settings provide a performance average of 127fps, with a low of 92fps. That is great news for anyone with old hardware, but like with high settings, anyone playing on a half-decent modern rig will want to opt for a much higher preset. 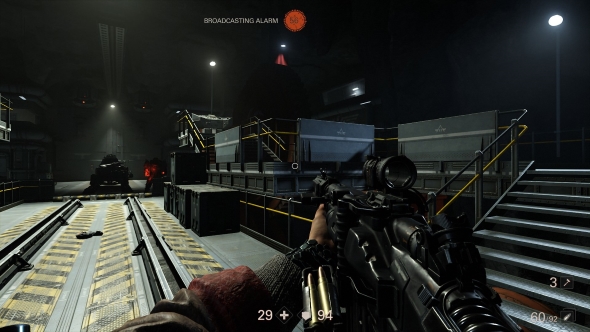 Wolfenstein II is still a looker at low settings, but it is the preset that demands the most sacrifice. Texture resolution is reduced, which creates a washed-out appearance, especially on light grey surfaces like the floor and stairs. Lighting is reduced to the bare essential shadows, which makes close-up items look too bright and distant ones too dark. A complete lack of ambient occlusion means the edges of the steps do not cast shadows downwards, and the recesses of the rifle’s magazine lacks shading. While aliasing is not dreadful, it is more notable here than ever.

On a mid-range PC you will achieve 146fps on average, though, so there is a solid return on performance. The lowest recording I have at this setting is 111fps, which is outstanding. It is clear that Wolfenstein II is built for scaling, and more evidence can be seen in our multi-GPU tests below.

To see how Wolfenstein II: The New Colossus performs on different hardware, we have tested the game on four different graphics cards: two from Nvidia, and two from AMD. We have sampled from both the current and last generation of GPUs in order to offer the most useful information.

All four cards are tested on the game’s Mein Leben! preset, which dials every texture option up as high as they will go. For the test, we use Wolfenstein II’s in-game performance monitoring tool.

The results are pretty incredible. Our weakest card, the old AMD R9 380, is able to play Wolfenstein at highest settings at an average of 71fps. That is great news if you have not been able to upgrade your PC for a few years, and incredibly surprising considering the issues that Wolfenstein: The New Order had.

With more powerful cards comes even better performance. AMD’s RX 470, despite being on the lower-end of mid-range, is able to kick out 80fps. This is thanks to the game’s partnership with AMD.

As for Nvida, the numbers certainly are not sloppy. If you are running a GTX 1060 – our recommended card for everyday gaming – you will be seeing average frame rates in the 90s, while those with older cards like the 970 can still hit above 60fps on highest settings. It is a great picture all around for performance, then.

That is not to say Wolfenstein II is perfect on PC, though. Many users are reporting issues on forums like the Steam community. While I have not experienced any issues with standard performance, I can attest to the fact that the game does not enjoy being alt+tabbed, and is susceptible to the odd crash if you try and do other things around it. These issues are less than ideal, but not game breaking; settle in for a shooting session and leave everything else alone and you should find things work smoothly.

How to run Wolfenstein 2 at 60fps 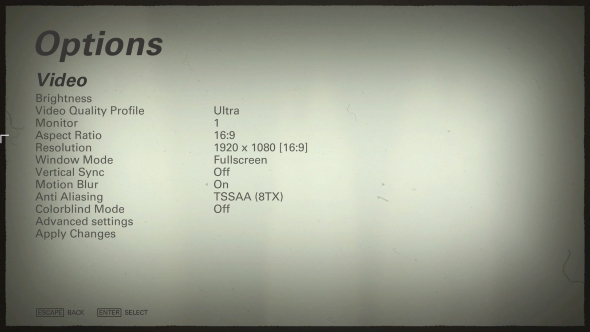 How do you run Wolfenstein II at 60fps? Well, you just run Wolfenstein II at 60fps. The game has been developed so strongly that, even with older hardware, the golden standard should not be out of your reach. The ‘worst’ performance I have encountered is using a GTX 970, but even on the highest settings it still outperformed 60fps on average. You could notch down to Uber settings to be on the safe side, but at 1080p you should be fine cranking everything all the way up.

Just a few days ago we were happy to report that Bungie had created the best PC version of the year with Destiny 2, but that crown has lasted less than a week. There’s no doubt about it: Wolfenstein II is 2017’s best PC port. MachineGames have put together a phenomenally good-looking shooter that runs smooth as warm honey, even on that old graphics card you were considering putting on eBay.

With a huge variety of settings and a greatly detailed performance monitor, it’s also got plenty of PC credentials. There’s nothing to rival Assassin’s Creed Origins’ amazing menu design and benchmark tool, but that’s a small niggle when performance is this good. Hopefully future patches will stabilise the game’s distaste for alt+tab and third party overlays, but aside from that our testing has revealed nothing to grumble about.

The final word, then, is that if you have a PC – even a rig that’s been gathering dust for the last couple of years – then it’s a PC version of Wolfenstein II that you want to buy. The game is clearly at it’s best and most brutal with a keyboard and mouse, and with framerates like these, you won’t want to even touch the console version.