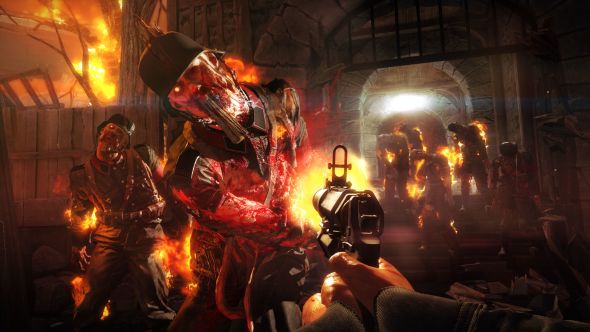 Bethesda marketing executive Pete Hines has described the next title by MachineGames, the new Bethesda studio who brought us Wolfenstein: The New Order and The Old Blood, as “fucking bananas”. We assume that’s an adjective phrase in this context, rather than a verb and a noun.

For more thrilling gunfights, why not try some of the best FPS games on PC?

Hines was speaking on the Kinda Funny Gamescast. “MachineGames has been hard at work on something, which I can tell you I have played,” says Hines. “It is fucking bananas. And I can’t wait to show what it actually is.”

Host Greg Miller asked if we’ll see a full reveal at E3 2017, a question which Hines ducked, but said, “I’ll let you know when.”

It’s widely believed that MachineGames’s next title will be a sequel to Wolfenstein: The New Order, and that it’ll be called New Colossus. A teasey DOS-like screen flashed during Bethesda’s E3 2016 presentation, listing New Colossus after previous Wolfenstein titles, beside a redacted release date.

New Colossus is also a sonnet by the 19th century American poet Emma Lazarus, which Wolfenstein protagonist BJ Blazkowicz recites in The New Order. It’s the poem that appears on the base of the Statue of Liberty, inviting the world to send their tired, poor, huddled masses to America.

In September 2015, Anya’s voice actress from Wolfenstein: The New Order said she’s working on “a second one”, so the evidence is piling up that more Wolfenstein is coming soon.