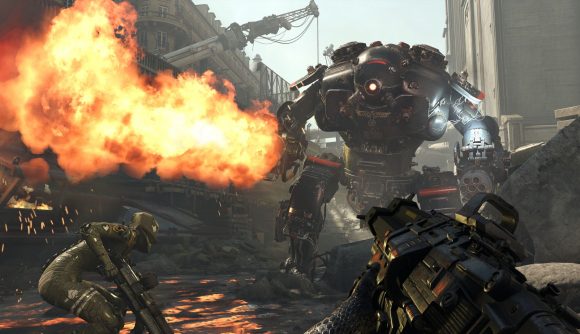 Wolfenstein: Youngblood will not feature real-time ray tracing support at launch, says executive producer at developer MachineGames, Jerk Gustafsson. The latest title in the Wolfenstein series will launch on July 26, 2019, but RTX support will come later as Nvidia’s engineers “are still hard at work” to get it up-and-running.

In an interview with GamesBeat (via WCCFTech), Gustafsson confirmed that MachineGames is still yet to confirm a date with Nvidia and its engineers as to when this functionality may be implemented in the game. Nvidia had previously, and rather emphatically, touted its extensive lineup of RTX games from E3, including Wolfenstein: Youngblood, and it would be surprising to see the RTX rollout delayed too long.

“We’re working together with Nvidia on that, but raytracing won’t be available at launch,” Gustafsson says to GamesBeat. “The engineers at Nvidia are still hard at work getting that solution to look as good as possible for the game, and the date is still to be determined. But from what we’ve seen so far, it’ll be good.”

Nvidia is also giving away copies of Wolfenstein: Youngblood with every purchase of a GeForce RTX 20-series graphics card (discrete or system) so that users can experience the ray-traced revisionist world of Wolfenstein first-hand.

Other RTX titles announced around E3 include: Control, Cyberpunk 2077 (you can read our first impressions of RTX in Cyberpunk 2077 here), Doom Eternal, Call of Duty: Modern Warfare, and Watch Dogs Legion.

Wolfenstein: Youngblood will follow the twin daughters of the series’ main protagonist, B.J. Blazkowicz, as they take to the streets of Paris to liberate the country from occupying Nazi forces and search for their missing father. If that hasn’t already got you stirred up for more, it’s also going to be a fully cooperative experience.

The title is built on the id Tech 6 engine, and MachineGames are “pushing the engine pretty hard in this game” according to Gustafsson. No doubt real-time ray tracing on top of that could make for a demanding workload, but we’re yet to hear exactly what extent of RTX implementation we’ll see once it’s been patched in.

Beyond the humble PC, Youngblood will also be available on Nintendo Switch, Xbox One, PlayStation 4, and become one of the first tiles to make it onto the Google Stadia streaming service come November.