The oft-forgotten stepchild of the Wolfenstein series is the 2009 entry by Raven Software, simply titled ‘Wolfenstein’. It added a touch of open-world exploration to the otherwise linear FPS series with its city hub of Isenstadt, in which players could tackle side-quests and generally poke around before leaving on more traditional missions. It wasn’t that well received, but exactly ten years later, Wolfenstein: Youngblood is trying the exact same thing, except there’s co-op now.

Youngblood is set in 1980, 19 years after the events of The New Colossus and some time after the ‘Second American Revolution’ it ignited. The Nazis have been ousted from America, series hero BJ Blazkowicz has killed Hitler – see Wolfenstein 3D, which is still canon, apparently – married Anya, and raised two twin daughters. Now he’s gone missing, with reports that he’s travelled to Paris in search of a location called ‘Lab X’. The twins, Soph and Jess, go after him.

That’s pretty much the whole story, and this is a good thing – as fun as the last game was, Wolfenstein II: The New Colossus could feel a little overplayed at times, with far too many pre-rendered cutscenes that were often too long for their own good. Youngblood has far fewer, and they aren’t even pre-rendered. You have to do a few things around Paris to get access to Lab X and find BJ, but in general, players are free to explore and shoot Nazis however they like.

While Youngblood’s Paris is split into districts – between which players must use the Metro system to travel – these areas are large, open, and contain much to do and discover. In fact, it’s very reminiscent of immersive sims like Dishonored, Thief, or Deus Ex, which isn’t too surprising when you realise that a large chunk of Youngblood’s development was handled by Dishonored creator Arkane Studios. 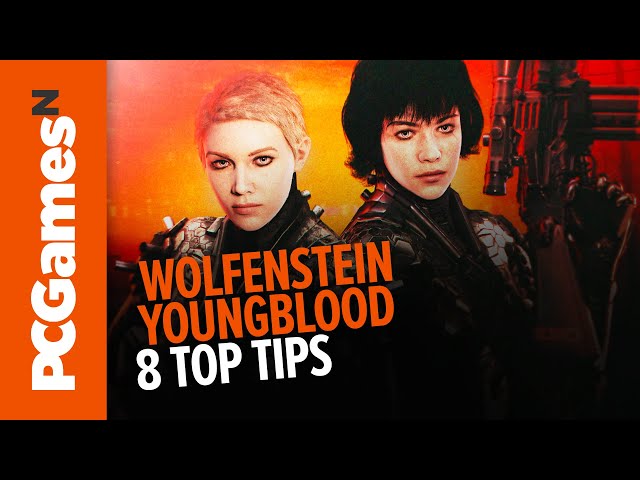 Paris even looks a lot like Dunwall, spectacularly so, in places – this is often a far prettier game than Wolfenstein II. There aren’t any friendly NPCs or magic powers, but there are secrets and shortcuts hidden everywhere. Jump up to an innocuous-seeming balcony and there’s a good chance you’ll discover a whole new area – possibly containing lore, equipment, a tip that may help you on a mission, or a stealthier, more direct route to your current objective. It’s really quite excellent, and this encouragement of exploration helps Youngblood’s open areas succeed where Wolfenstein 2009’s failed.

Controlled by the AI, your partner is pretty useless during tougher fights

The overriding goal of every area is to break into one of the secure Nazi ‘Brother’ facilities, override the Deep Thought-style computer there, and probably defeat a boss or two, but you’ll find plenty of side missions to do along the way. Some are given by NPCs in the Catacombs hub, and these are always the more important – for instance, they might help you infiltrate the Brother facilities by showing you an alternate path, or the location of some useful goodies. This helps each infiltration feel like a grander, more multifaceted operation, and gives you a compelling reason to do the side missions first. 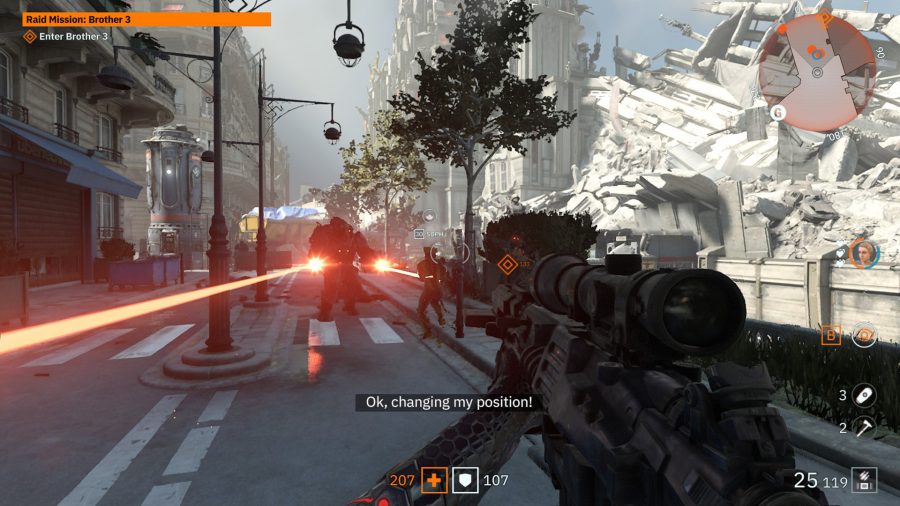 Other side missions will crop up while you’re out on the town. You’ll be exploring an area and your friend Abby will phone you up and tell you about something important that needs doing, like a key commander to kill, vital data to pick up, or prisoners to free. It feels a bit like busywork, but they won’t pop up endlessly like Skyrim-style radiant quests, and help to ensure you won’t be lacking for things to do in Wolfenstein: Youngblood. That’s just as well, because if you just plough through the main missions you’ll be done with the game in no time at all. You’ll need to level up a bit to challenge Brother 3 and Lab X, but a no-frills run will probably take you fewer than ten hours.

Down in the Underground

Youngblood’s hub area sees the resistance hunkered down in the creepy Paris catacombs - the ones with skeletons lining the walls. Here you can practice your shooting, play Wolfenstein 3D, and accept side missions, including daily and weekly challenges. What you won’t find are the fun character moments that made previous hub areas interesting. Unfortunately.

And on that note, Machine Games executive producer Jerk Gustafsson has said “this is our biggest game yet”, “longer than our previous titles”, and will take “at least 25 to 30 hours if you play through everything.” All I can say is that simply hasn’t been my experience. I’ve seen the credits roll, explored every district, and done multiple major and minor side quests in each one. I’ve clocked ten hours so far, whereas a similar approach to The New Colossus took me around 15. It’s possible that Youngblood will take you 30 if you do literally everything, but my moderately thorough playthrough definitely feels more lightweight than either New Colossus or New Order. 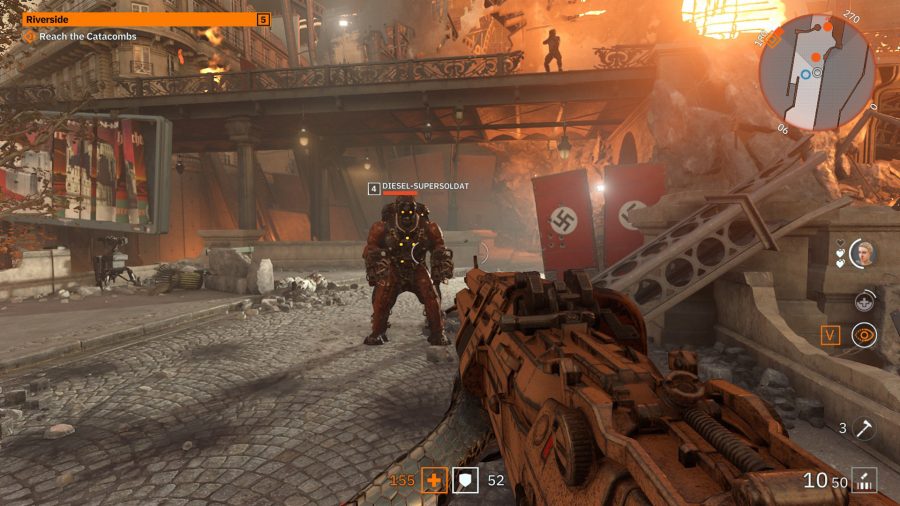 The actual gameplay is very similar to the previous Wolfenstein games, meaning: it’s still excellent. There’s a decent range of guns, from classic workhorses like the shotgun to the powerful Kraftwerk weapons. They’re all extremely fun to use, and satisfying to tear apart Nazis and robots with.

The enemies ramp up quickly in difficulty, from basic soldiers who’ll go down in a single shotgun blast up to armoured Super Soldiers and giant robots. The only real change is the inclusion of a health meter with armour points – health is almost no concern, but an enemy with heavy armour will pose a real challenge. It’s a UI feature that complements well-judged character designs in communicating enemy threat levels well, and that usually stops fights from feeling too frustrating. The only real casualty of all this is stealth, which is still sort-of possible, but it’s much harder – Commanders can still call reinforcements but they’re no longer marked, most enemies can’t be taken down in one hit, and the second an enemy sees you all hell breaks loose. 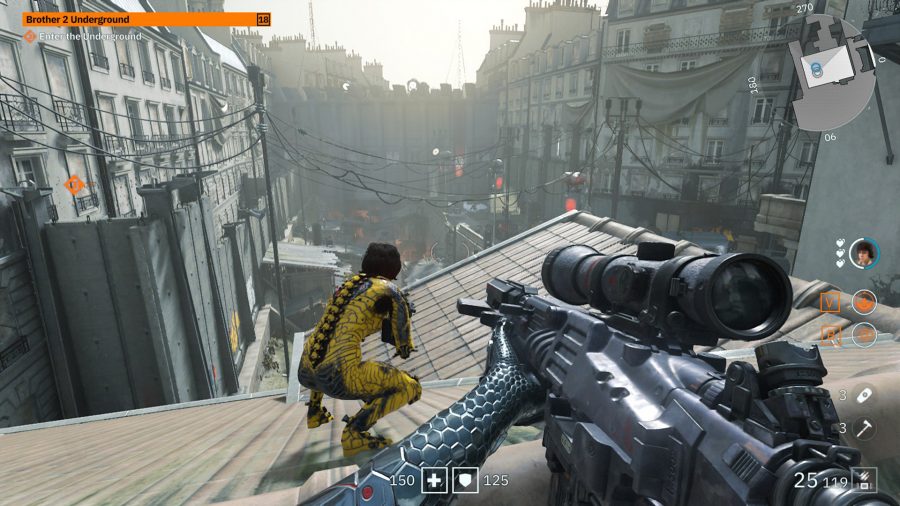 Which brings us to the main new feature of Youngblood: co-op. The game has been designed for two people, so that’s a bit of a problem if you want to play solo. You’re accompanied at all times by an AI partner who’ll heal you occasionally and intelligently stay out of the way if you do fancy a bit of sneaking, but sadly it’s pretty useless during tougher firefights. Here the AI doesn’t so much stay out of trouble or take cover as stand right in the middle of the action shooting point-blank at everyone.

Duos have three shared lives, and if someone bleeds out without getting revived you lose one. Lose them all, and you’ll have to restart the level, except now you’ve got just one life and the same ammo as when you died – so probably none if you were in a boss fight, making the final boss in particular insanely frustrating. I lost count of the number of times I died just because the AI wouldn’t take cover. On normal difficulty I got through single-player without too many problems, even with an AI with a death-wish, but on harder difficulties you may struggle to play solo. 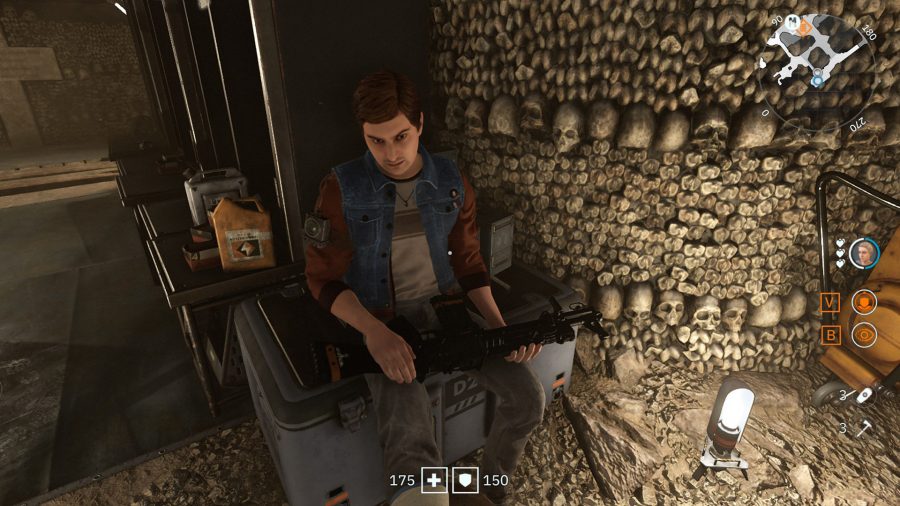 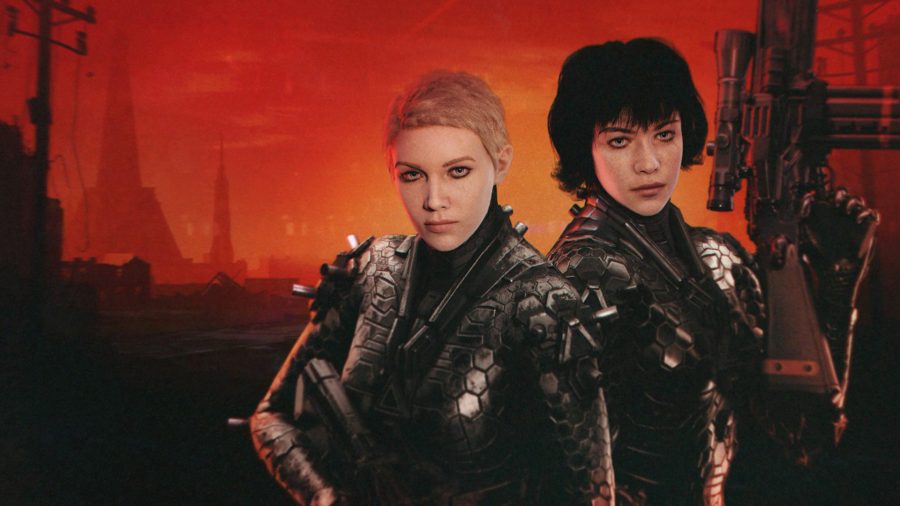 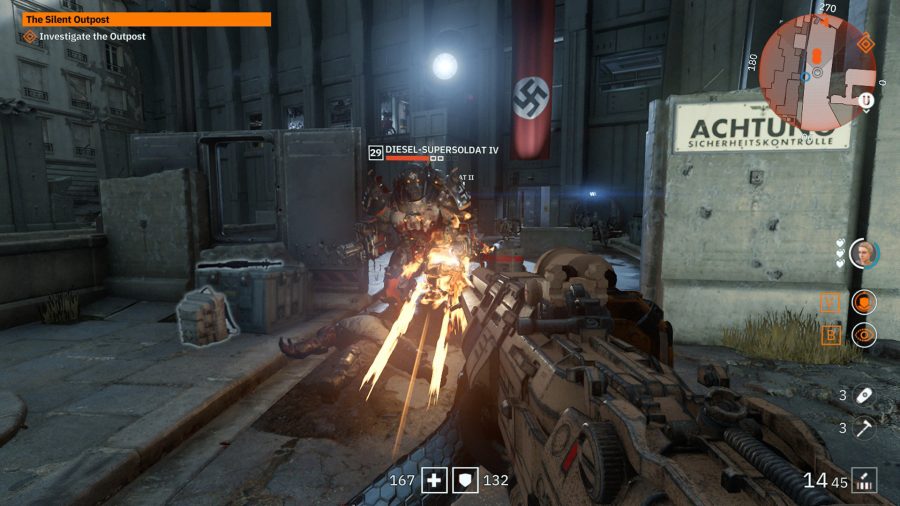 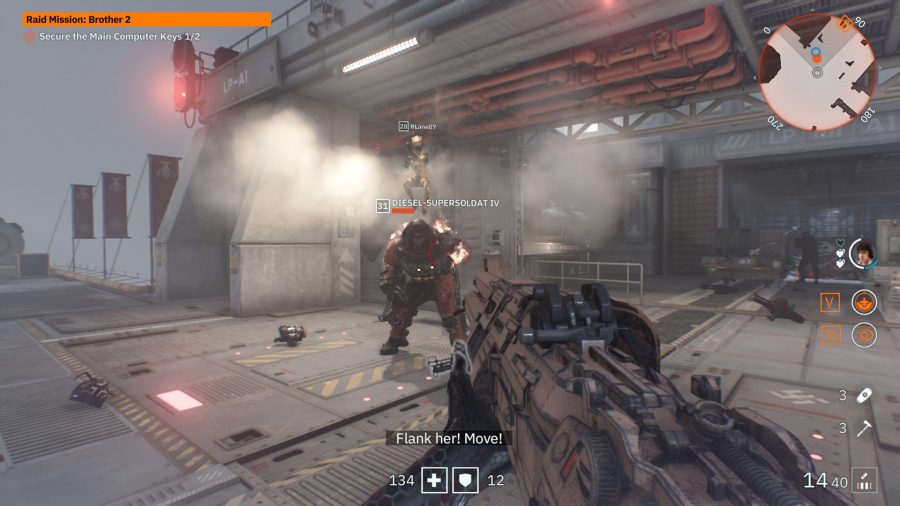 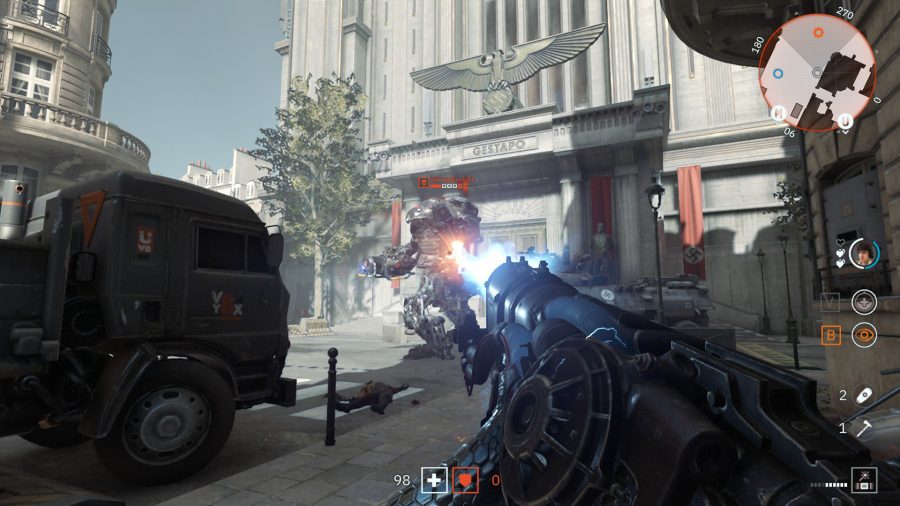 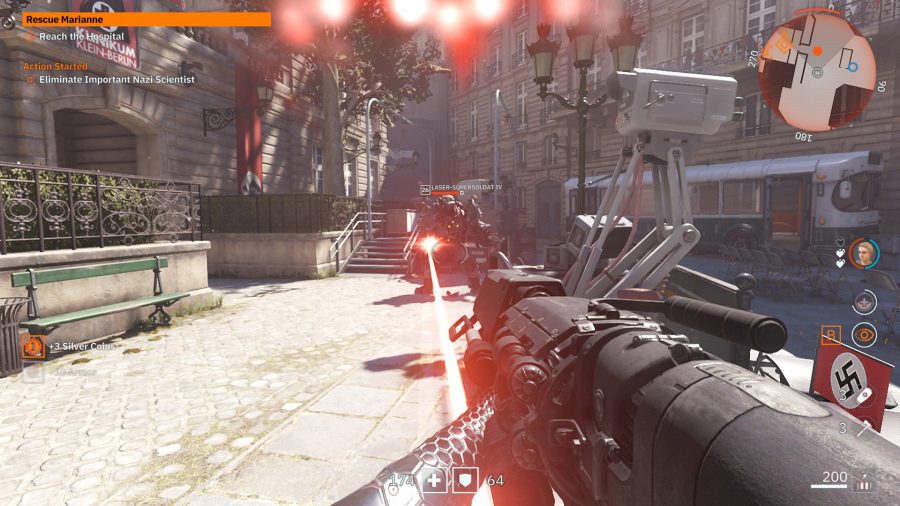 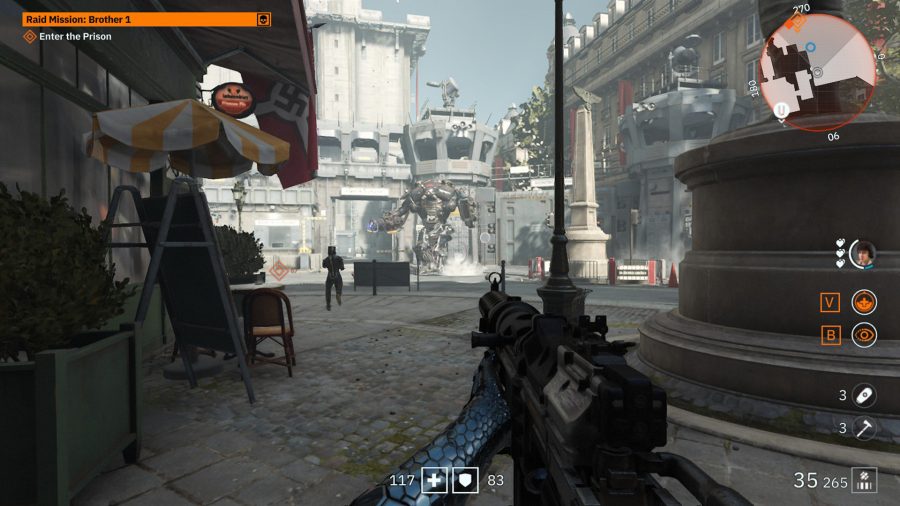 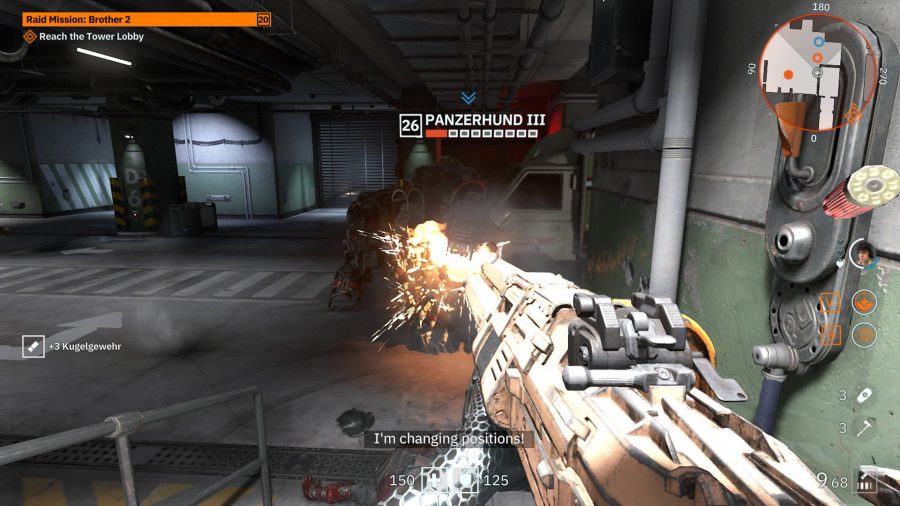 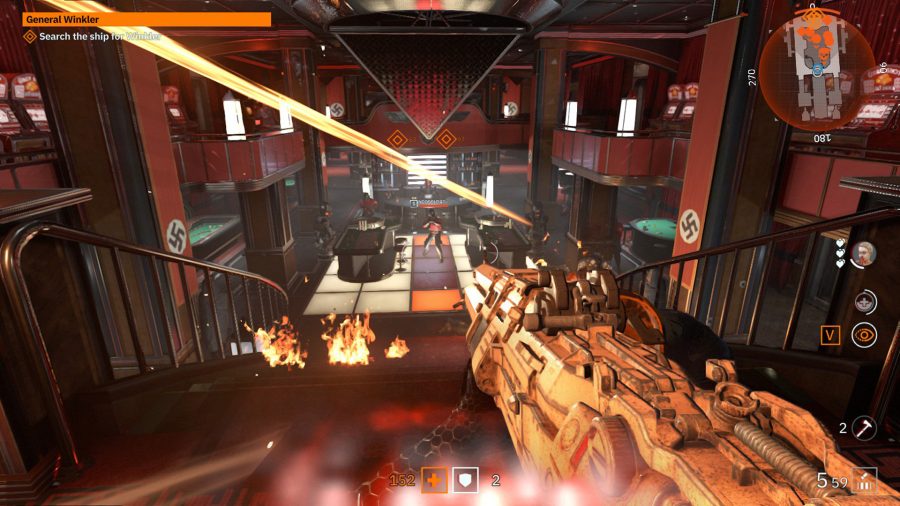 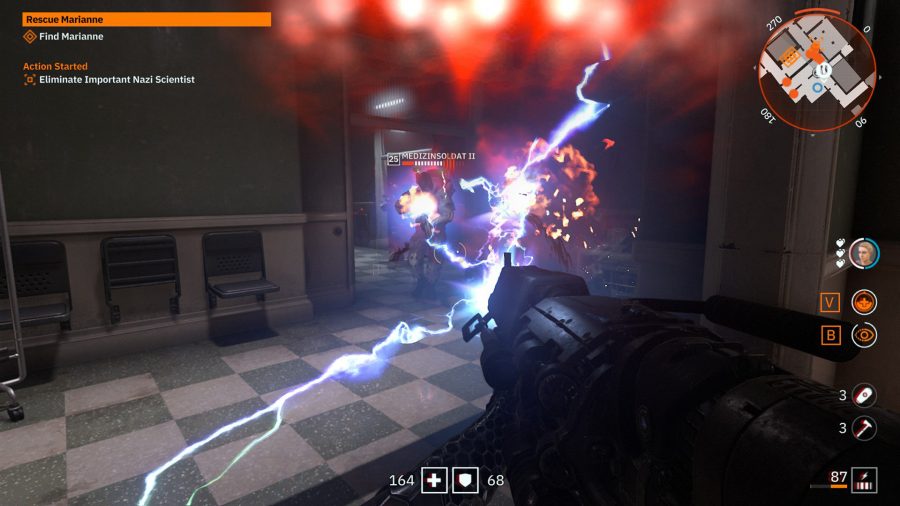 So if you want to play Youngblood correctly, and have real fun with it, you’ll need a second player. Take on Nazi-occupied Paris with a friend and Youngblood is one of the best shooters of the year. Once you can actually start coordinating your attacks, managing your health and armour boosts, and fight with someone who won’t stand in front of a giant Zitadelle robot firing a pistol at it, every design decision Machine Games has taken makes sense (it still doesn’t make stealth any easier, however).

There are still a few things that could do with a patch. I experienced floating enemies, one post-game mission was given to us in the middle of the campaign, and some key objectives didn’t show, which forced a mission restart. While I didn’t get any myself, another writer I played with experienced frequent crashes, which kicked us both out of the game. The game seemed fussy about invites too, and it took me a while to receive any. It’s also really annoying that co-op partners aren’t marked outside of the minimap, so you’ll probably lose sight of each other often. There’s no offline mode, either.

Considering it’s ‘only’ a spin-off, this is a riotous and well-designed entry in the series - however, it’s built with co-op in mind. Solo play is fun if flawed, but play with a friend, and you’ll both have one of the best shooter experiences of the year so far.