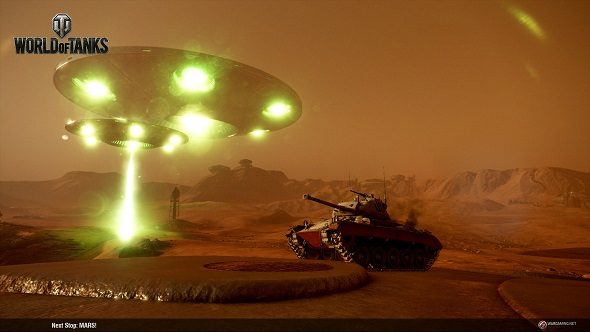 Wargaming’s April Fools joke is upon us, except it’s not really a joke at your expense – instead it’s an actual new mode in World of Tanks that you can only play for a limited time. Last time Wargaming took us to the moon, but this time they’re riffing off Elon Musk’s vision of the future: we’re going to Mars, baby.

Explore the stars further in our list of the best space games.

In the new mode, you’ll zip across red rocks in your chosen tank, firing lasers under hovering UFOs. The red planet also simulates low gravity, taking advantage of the game’s recently improved physics implementations. It sounds pretty fun. It looks fun, too, as you can see in the video above.

If you play the mode, you’ll get a ‘Life on Mars’ medal. You have between now and April 3 at 8am BST to get playing, so fire up the engine on your M24 Lunar Chaffee and get with the pew pew.

Wargaming also revealed some tips, which you can read below: