Blizzard’s World of Warcraft: Legion panel, with the devs chatting about the world and its content – quite broad, then – for a hungry audience has finished. If you didn’t get a virtual ticket, you might feel a bit left out, but not to worry, we’ve got you covered.

Check out all the details from the panel below, including the closed beta launch date.

You can slap your eyes on the lovely cinematic right here.

This is the first time that Blizzard have designed a cinematic that ties directly into the main story of the game.

“With Legion,” says creative director Alex Afrasiabi, “we felt like we really had an opportunity to take our storytelling to another level.”

With the opening cinematic, Blizzard wanted to highlight the heroes of Azeroth before dumping them in the Broken Shore, where the heroes of the Alliance and Horde unite to face the Burning Legion at the start of the game.

You can slap your eyes on the lovely cinematic right here.

The first place you’ll encounter in the expansion, the Broken Shore is ground zero for the invasion of Azeroth. This is where the big shots are gathering to fight. It’s the “springboard” where the plot points of the expansion are established, according to Afrasiabi.

What it is exactly is a 40-player scenario where Horde and Alliance work together to fight their way up the Broken Shore to face the Legion, so it’s a wee bit different from your regular expansion introductions. 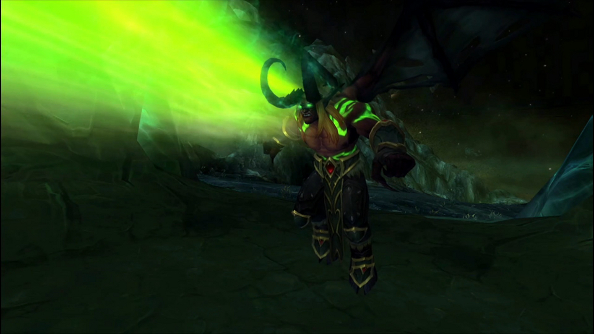 “These Elves have sacrificed everything,” says Eric Maloof, senior game designer. And they’ve made all these sacrifices for one reason: to end the Burning Legion.

By choosing a Demon Hunter, you’ll also find out what Illidan was doing at the Black Temple all the way back in the Burning Crusade expansion.

Things kick off for Demon Hunters in Mar’dun, the prison world shattered by its warden, Sargeras, once he decided that being evil was just too cool to turn down.

In Mardun, Demon Hunters will have their work cut out for them while fighting the Burning Legion, as they won’t just face foul demons, but giant constructs and warmachines. The good news is that Demon Hunters can use the Legion’s devices against them.

Players will be able to take over the demonic gates and use them to summon their own armies and tap into communication devices and use stolen information against the Legion. Special crystals can also be discovered with special abilities, like reducing cooldowns to zero.

Like the Death Knight, Demon Hunters will gradually get more abilities as they play through their intro. Where they get these abilities is a bit more interesting, though: they come from the smouldering corpses of dead demons. Lovely.

And of course, Demon Hunters get their own special, epic mount: the Felsaber, and frankly, it looks terrifying. 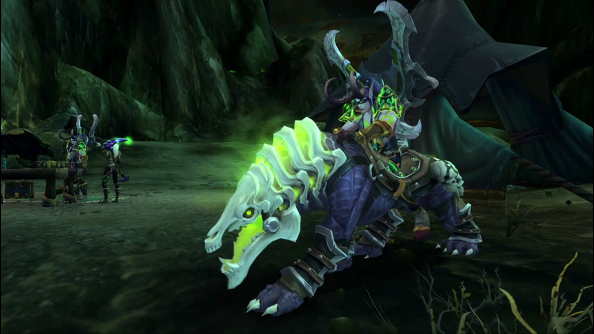 By the end of the intro, players will be imprisoned by heroes of Azeroth, “seemingly for all eternity,” teases Maloof. But fast-forward to the present, and it’s time to stage an escape and fight the Burning Legion once again.

After escaping and playing nice with the two factions, Demon Hunters will be able to establish their own Order Halls and begin their hunt for their special artifact weapons, a pair of nasty looking glaives.

Val’Sharar, one of the six zones in the Broken Isles, is the ‘druid’ zone, full of forests and critters and hippies. It’s a paradise facing corruption, complete with twisted dragons, once green but now transformed into nightmare dragons. That’s all very interesting, I suppose, but far more important is the announcement that druid forms, like the Moonkin, are getting a graphics overhaul. 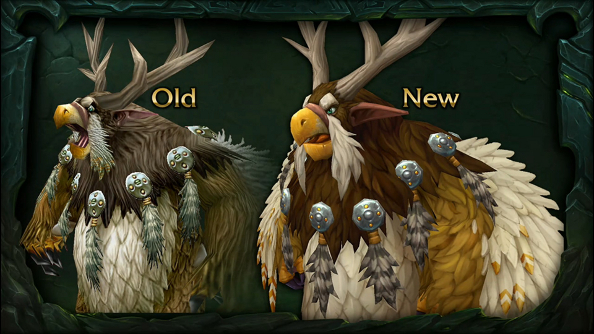 Druids that like the water are in for a treat, as well. 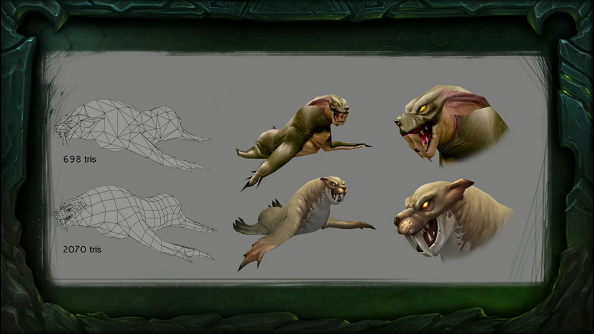 Blizzard put on a whirlwind tour of the Broken Isles and its lore, from the corrupted green – now nightmare – dragons of Val’Sharar, to the rugged lands of Stormheim, home of the Vrykul God King. But when can you visit these areas? What level do you have to be?

It doesn’t matter, because it’s up to you how you progress through the Broken Isles. Instead of following a specific, pre-ordained path, you choose where you go thanks to scaled zones, until you reach level 110 and head to Suramar.

“It makes it much easier to play with your friends,” explains game designer Ion Hazzikostas. “It removes the barrier of level to just jumping in and questing in the outside world.”

Hazzikostas emphasises that players aren’t scaled down, the world scales are the player, and itemisation follows suit, meaning that you’ll get appropriate rewards for completing quests.

Legion’s endgame, according to Hazzikostas, will be a bit of a hybrid, taking the best bits from the last two expansions, Mists of Pandaria and Warlords of Draenor. The key here seems to be choice, as well as inspiring you to embark on special endgame quests, without making you feel like you have to get on this treadmill. 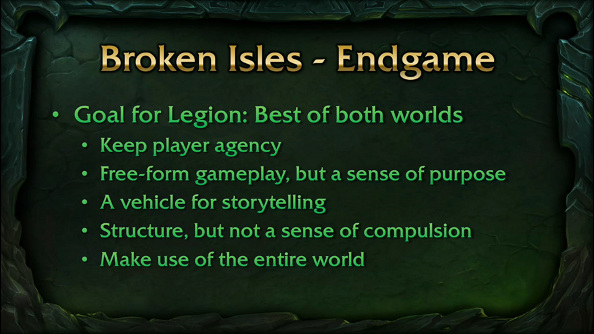 One thing that will make Legion’s endgame a little different is the scaled zones. There isn’t a single endgame area, all of the zones can entertain max-level characters with quests that range from missions that crop up just for a couple of hours, to more epic quests with suitably epic rewards that might run for an entire week.

You won’t need to keep a schedule: that’s the important take away. You will be able to jump into the game whenever you want and see a bunch of quests spread across the whole of the Broken Isles that you can dip into.

To keep you coming back, Blizzard promises to cram a lot of stuff into the endgame, from garrison missions for players rather than followers, reputation objectives PvP quests, world raid bosses, profession missions and mini-games.

“We want to overwhelm you with choices,” says Hazzikostas

And it wouldn’t be a World of Warcraft expansion without some new raids. Legion will bring two new ones with it, the Emerald Dream (at long last) and The Grand Palace of Suramar. 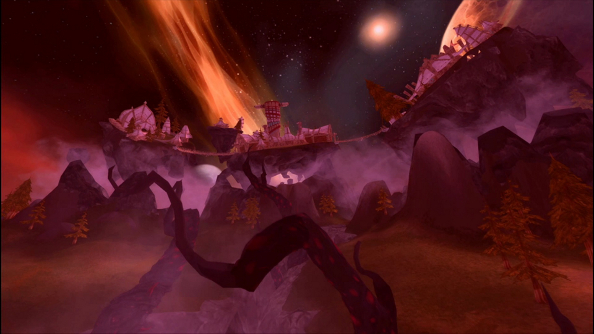 The former sees players heading into the alternate dimension of the Emerald Dream, now twisted and corrupted. Dragons will be faced, satyrs will be fought, and no doubt some sparkly loot will be discovered. The latter is the base of Gul’dan himself, a striking Elven city that also contains the final pillar of creation, which you’ll be wanting if you want to stop the Burning Legion.

Before you hit these big raids, you’ll probably find yourself going through the ten new dungeons, which are split up between five levelling dungeons, and five endgame ones.

These dungeons will be, according to Blizzard, better integrated into the world, and some will be story dungeons, closely linked to quests that players will already be working their way through. And thanks to zone scaling, the dungeons will let players tackle them at any time.

Dungeons will be important in endgame, as well. 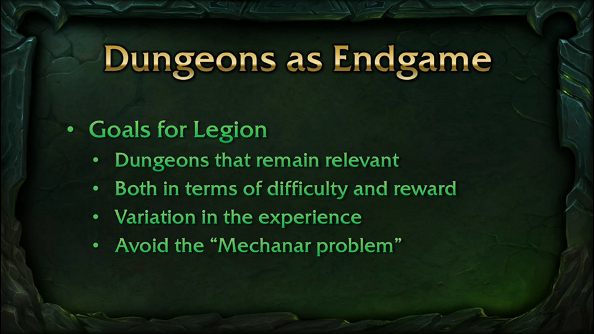 A big part of keeping dungeons fresh even once you’ve gone through them all and hit level 110 seems to be the Legion’s own version of Challenge Mode, a mode that picks a random dungeon, throws in a few curveballs in the form of modifiers like exploding corpses or taking constant damage over time. The loot that you’ll receive will be determined by your power level, as will the dungeon’s difficulty.

The main difference between this Challenge Mode and Warlord’s, say Blizzard, is that Legion’s version scales dungeons up to suit a player’s gear and level, instead of scaling players down.

Boy, that was quite a lot of detail. And now that’s your lot. Well, not quite. There’s still the question of a closed beta date, now that we know that the game will launch next summer. Good news, then, because Blizzard revealed that closed beta will begin soon. In the weeks following BlizzCon, in fact.