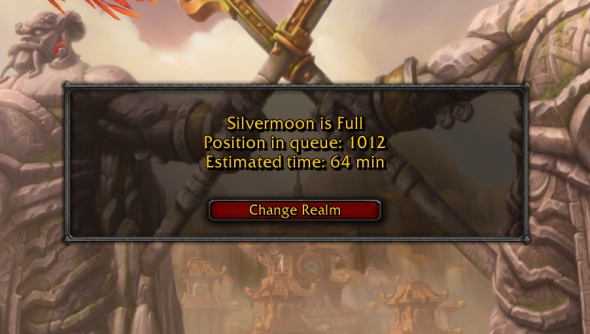 Since launch, Warlords of Draenor’s been plagued with server queues. It’s the case with every major MMO expansion, everyone piles into the game and the servers fill up. However, Blizzard are adamant there’s nothing they could do to avoid the crush.

“There is no problem I’ve had in the last 72 hours I could fix with money,” World of Warcraft’s senior server engineer tweeted. “If there was I’d do it.”

McCathern’s comments came after Blizzard community manager ‘Bashiok’ came under fire for explaining the key reason for the crush. “Queues have always existed as a measure to keep in-game performance and gameplay consistent,” Bashiok wrote. “We’re just seeing demand that outstrips any expectations we could have had. Plus the way people naturally clump up on a few high pop realms makes it that much worse.”

“We just added new hardware with this maintenance in attempts of coping with demand,” Bashiok replied. “Realms are looking pretty stable.”

“Stable, yes. Sufficient, no. It’s a simple matter of Blizzard blindly putting it’s pocketbook ahead of its customers. Money > Rep.”

It’s here that McCathern explains that “There is no problem I’ve had in the last 72 hours I could fix with money. If there was I’d do it. Some servers are very high pop. We know this is a problem, but [the] problem can’t be solved with more hardware.”

Elsewhere, Blizzard community manager Nethaera explained that early stability bugs had been nuked with hotfixes. “With many of the new changes that have been implemented over the past couple of days, we’ve seen a marked improvement in realm performance and stability. Realms in Europe, the Americas, and Oceania had rolling restarts to pick up hotfixes to address some gameplay issues.”

To help cope with server load Blizzard also “raised maximum realm population in these regions.” Despite this they “continue to also see realm queues on heavily populated realms.”

Nethaera says Blizzard are “currently working on expanding the instancing tech we deployed earlier which allowed for additional copies of Draenor.” They’re “currently testing these improvements with the goal of deploying this tech more widely.”

Nethaera’s not able to say when we will see these improvements rolled out.

Despite the server issues, Nick’s having a great time as you can read about in his World of Warcraft: Warlords of Draenor review.