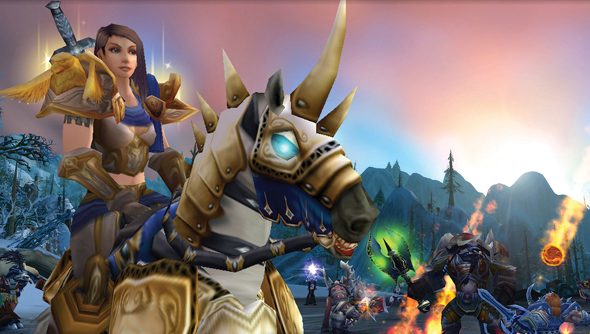 This weekend’s BlizzCon is bound to be chock-a with announcements. Here’s something we’d rather not see drowned in the missives from Draenor: a proper flying-mount’s-view over the last ten years of World of Warcraft, one of the best MMOs on PC. Fittingly enough, it’s named Looking for Group.

The film will get its premiere this Saturday, November 8, at 5pm Pacific Time – or one in the morning for UK-based BlizzCon virtual ticket holders.

“Celebrate 10 years of adventure, camaraderie, and /dancing on mailboxes all around Azeroth,” suggest Blizzard. “Explore the history of WoW with its creators, and journey into corners of Blizzard and the WoW community you’ve never seen before.”

Looking for Group is the work of Asylum Entertainment – a Californian TV production company responsible for documentary programmes with names like American Gangster and Gangsters: America’s Most Evil.

It’ll take fans past the gates of Blizzard Towers and through the glass airlock of WoW’s server rooms for the first time. There’ll be dev and community interviews, celebrity anecdotes, cosplay, and the inside story of the company’s rapid growth from 500 staff to 5000.

By all accounts, it was interesting period: one that saw Blizzard explode in size and forced to codify its values for the first time.

Do you think you’ll tune in at the weekend? You might want to check the BlizzCon panel schedule first.