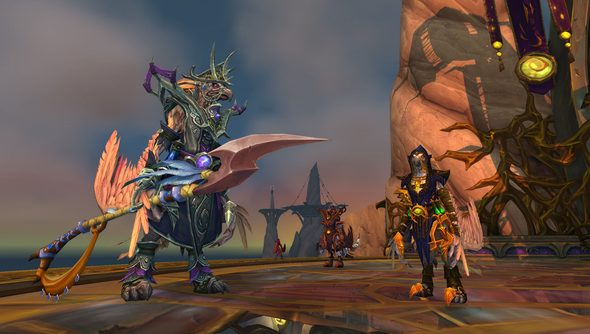 Our Nick’s spent the night working on his Warlords of Draenor review-in-progress, but you’ve probably spent it sleeping. You’ve yet to pass through the portal into the alternate orcish realm.

In that case, you’ll want to take a look at Blizzard’s latest trailer – and maybe hear a little about the grumpy winged beasts awaiting you on the Spires of Arak.

This in-engine trailer can’t quite compete with the megapixel-sharp fangs in the Warlords of Draenor intro cinematic. But that familiar chunky aesthetic hasn’t aged too shabbily. One of Draenor’s headline features is brand new WoW character models – so expect a new face on every playable race.

The Spires of Arak, meanwhile, lie in a region due south of the Draenor mainland. In their latest (and one would assume, last) region preview, Blizzard introduced the “proud, hateful and defiant” creatures who occupy those peaks – the winged arakkoa.

The arakkoa are descendants of a once-powerful civilisation with an empire that co-existed alongside that of the ogres. The beaked bird-people have devolved somewhat, but are nonetheless skilled spellcasters with a strange hold over Draenor’s sun.

The arakkoa will attack ground-dwellers – meaning players – on sight, and don’t go especially easy on their own kind either. Arak plays host to a group of arakkoa outcasts, distinguished by their shrivelled wings and contorted bodies, who’ve found a home in the shadow of the spires. To put it bluntly – you’ll find potential quest-givers in the refuge city of Skettis.

Arak’s population is filled out by hostile creatures. Beware of dread ravens on the spires, and multi-headed plant beasts in the woods down below.

Do you think you’ll cross the boundary into Draenor this weekend?