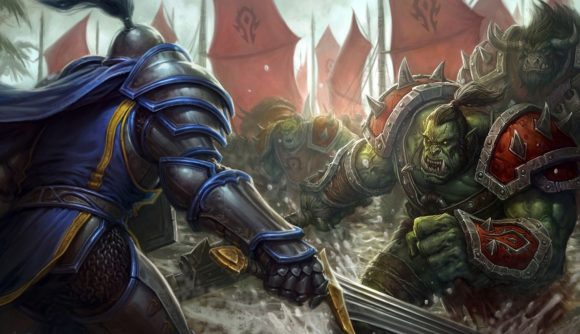 The Alliance and Horde in World of Warcraft could, one day, share the same side. Blizzard is open to the idea of the bitter rivals becoming allies in the MMORPG game, if only to mitigate population issues.

During a panel at this year’s BlizzCon, the subject of the balance between the two sides across WoW’s servers came up. Alliance and Horde dominate certain realms to the point players are forced to switch sides, or servers, in order to play everything, because you can only raid and do all that good stuff with like-sided players. Blizzard has implemented features to control this, like cross-server playing, but it’s still a problem, one that game director Ion Hazzikostas says is a “top priority”. Moderator Scott Johnson asked about whether it was feasible Alliance and Horde could just complete stuff together, to make everything convenient.

Somewhat shockingly, Hazzikostas thinks it could happen. “I honestly would not say never,” he said. “At the end of the day an MMO like World of Warcraft is about being able to play with your friends, being able to play where you want to be and arguably, there’s greater stretch in the faction identity if you feel you can truly choose the faction you identify with, that you feel most a part of, and not have to sacrifice that because you need to be with your group or you want to join a higher-rated guild.”

Hazzikostas references that arenas allow Alliance versus Alliance and Horde versus Horde, and The Burning Crusade is bringing that feature to WoW Classic this year. He explains that removing this invisible barrier could be helpful to long-term players who’d like the freedom to try something different without changing who they play with.

“I have coworkers who are lifelong Alliance players who now play Horde, who really wish they could be Alliance, who are doing it for guild reasons,” he explains, “and I know there are tens of thousands, maybe more, in that exact same boat around the world. We’d love to do something for them.”

You can watch the full panel below:

BlizzCon has delivered its usual load of reveals and other information. WoW; Shadowlands’ first update is called Chains of Domination, Diablo 2: Resurrected was revealed, and we got a bloody good look at the rogue class for Diablo 4, the trailer for which was all done in the game’s engine.
{"schema":{"page":{"content":{"headline":"World of Warcraft might let Alliance and Horde raid together someday","type":"news","category":"world-of-warcraft"},"user":{"loginstatus":false},"game":{"publisher":"Blizzard Entertainment","genre":"MMO","title":"World of Warcraft","genres":["MMO","RPG","Subscription"]}}}}