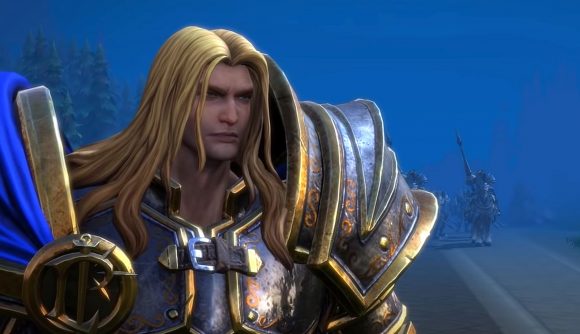 If you’re a fan of all things RPG games – including TV shows tying into behemoths of the genre – you’ll have no doubt seen that sneak peek of Geralt’s new look in the upcoming Witcher Season 2 teased this week. Showing the monster slayer in all-new, bulkier armour, the images have been prompting much excited chatter online ahead of the series’ arrival – and, it seems, even leading Warcraft’s co-creator to ponder an ideal new role for Geralt actor Henry Cavill.

World of Warcraft‘s associate narrative designer Anne Stickney has responded to a tweet showcasing Geralt’s Season 2 style, joking: “Is it… is it a little warm in here”, to which WoW author Christie Golden has replied “on the Arthas train” – a reference to the MMORPG’s iconic paladin. WoW guide writer, who goes by ‘Slayer Aernath’, agrees in the thread, asking Warcraft co-founder Chris Metzen what his view is.

“That Henry [Cavill] would be a good Arthas or that he’s dreamy?” Metzen asks. “Clearly both… d’uh.”

Following this, some fans have taken to social media with mock-ups imagining Cavill à la Season 2 Geralt in the role of the paladin-turned-Lich-King.

That Henry would be a good Arthas or that he’s dreamy? Clearly both… d’uh.

“I photoshopped Henry Cavill as Arthas after seeing Chris Metzen’s tweet endorsing him for the role,” Reddit user Shara184 says, alongside the image below:

Similarly, Twitter user Jalvina has posted this image of a Cavill-ian Arthas as in the style of a movie poster:

Sadly, there’s no sign this could become a reality any time soon, but it’s a bit of fun to imagine the actor taking up such an iconic role in Warcraft’s universe – and, based on these mock-ups at least, it seems like it would indeed be a great fit for for the actor bringing Geralt to life in the Netflix show.

There’s no sign of a specific Witcher Season 2 release date beyond ‘2021’ just yet, but first details – such as the plot – are starting to bubble up, which you can lap up in the meantime.