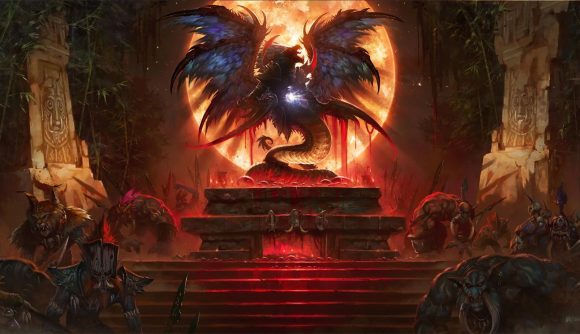 The researchers who wrote a paper about World of Warcraft’s corrupted blood plague have drawn parallels to the recent outbreak of coronavirus. The historic WoW event, which started after a patch in 2005, spread across the virtual world in such a way they deemed it relevant to the modeling of future epidemics. A decade and a half later, the researchers have naturally moved on, but they continue to see parallels in the events of the past few weeks.

Speaking to PCGamer, co-authors Doctors Eric Lofgren and Nina Fefferman have laid out how the virtual virus has affected their philosophies on the very real one that’s spreading across the globe today.

On the surface, there are already some obvious parallels. Though the source of Covid-19 wasn’t a blood god worshipped by trolls, it did spread partially through animals. The corrupted blood plague managed to decimate low-leveled players via an oversight that allowed hunters’ pets to carry it outside of the intended areas. Much like coronavirus, the in-game plague primarily affected the most vulnerable members of the community, those who were low-level. For Dr. Feffermen, it was also a lesson in how public perception can shape the course of a pandemic.

“It led me to think really deeply about how people perceive threats and how differences in that perception can change how they behave,” she says. “A lot of my work since then has been in trying to build models of the social construction of risk perception and I don’t think I would have come to that as easily if I hadn’t spent time thinking about the discussions WoW players had in real time about Corrupted Blood and how to act in the game based on the understanding they built from those discussions.”

Though there have only been a few cases of people purposely spreading coronavirus, the way citizens react to government restrictions and self-isolation could prove vital. We’ve seen beloved gaming events like E3 2020 and GDC postponed, but if attendees decided to travel and have a big party regardless, it would be of little use. This is a sentiment Dr. Lofgren echoes:

“When people react to public health emergencies, how those reactions really shape the course of things. We often view epidemics as these things that sort of happen to people. There’s a virus and it’s doing things,” he says. “But really it’s a virus that’s spreading between people, and how people interact and behave and comply with authority figures, or don’t, those are all very important things. And also that these things are very chaotic. You can’t really predict ‘oh yeah, everyone will quarantine. It’ll be fine.’ No, they won’t.”

The biggest takeaway, it seems, is to be prepared for bugs, virtual or physical. World of Warcraft’s event took the player base by utter surprise. For coronavirus, we’re more prepared, but outbreaks like this will still happen.

“It’s hard once a disease gets really well-established in a population to put that genie back in the bottle,” Lofgren warns.

That a video game can influence that preparedness is pretty cool, but unfortunately real-world has no server rollbacks, and pandemics do more than just hamper your virtual progress. The work of researchers like Feffermen and Lofgren could prove vital, but just like WoW, the reaction of people can also have a far-reaching impact.